Two years ago when I first saw Lonnie Weeks on stage I thought he must surely be a seasoned soloist as he was that good.  I couldn’t believe he was only in the corps de ballet, though, as it turned out, he did have a lot of stage experience before he arrived at San Francisco Ballet.  I am happy to finally meet him in person and discover what makes him tick.

Aimée Ts’ao:   So how did you come to dance at SF Ballet?

Lonnie Weeks: In my mind, it was a long time coming.  As a child growing up I put San Francisco Ballet on a pedestal.

AT: Where did you grow up?

LW: I was born in New Mexico and shortly after moved to a country town (Kankakee, Illinois) outside of Chicago.  Grew up in a corn field, but I commuted into Chicago almost every day to get good ballet training which was hard to find way out in the middle of nowhere.  It was my dream to dance at San Francisco Ballet, or perhaps some place in Europe like The Royal Ballet.  I never knew if I was good enough to get there, but that was the goal.

At fifteen I joined a company in Texas.  Ben Stevenson was the director of Texas Ballet Theater and I danced there for five years which was great experience.  Then I felt I needed something more – it was the right time for the next step.  In my mind TBT was always a stepping stone.   I came to visit a friend who had moved out here and I got to see the city which it was definitely more my cup of tea than Texas.  Then people told me I should audition, but I kept thinking I need five more years of training before I can join SFB.  I sent my résumé in and then got injured the day they told me I could come and audition.  I had to wait till the end of the season and they told me there wouldn’t be any more spots available.  But I said I didn’t care I just wanted them to see me even if it’s for the future.  Through a series of events I ended up getting a contract and moved out here.  I feel like it was just yesterday and now I’ve just signed my third year contract.

I was very fortunate my first year here.  I was not expecting the roles that I got.  I thought I’d being sitting around, but right away I was cast in (Balanchine’s) Symphony in C, 4th movement as a principal dancer and I was convinced it was a mistake.  Also I did (McGregor’s) Chroma and (Tomasson’s) 7 for 8.

AT: I remember the first time I saw you on stage – you danced amazingly well – so I don’t think you needed to worry about getting into the company or having roles.

LW: I was very lucky to have worked with Ben Stevenson.  He always put so much emphasis on performance quality on stage.  It’s not about the technique anymore, it’s about that extra special something that makes you stand apart from everyone else.  I think he was really good at pulling that out of the dancers.

AT: What have been the highlights for you since you got here?

LW: Symphony in C –  I got to dance it opening night in Orange County with Nicole Ciapponi which was a big honor because we’re just in the corps in the company right now.  To be picked for Chroma my first season.  (Forsythe’s) Artifact Suite is one of the most artistically satisfying dances I’ve ever done, but not in the beginning.  I just couldn’t get it – it was so intricate, it was a nightmare, but once it was in my body I loved it.

AT:  It doesn’t just have to be roles.  It can be anything else too.

LW:  Moving to San Francisco.  I just love it.  And this is the first time I’m living on my own.  When I was in Texas I was with my mom.  Meeting well-known choreographers, like Chris Wheeldon.  And touring – this summer I went to Moscow and Germany and I can’t wait to go to London.

AT:  What  have the challenges been for you?

LW:   I can think of a lot of things.  First, coming from a smaller company, I wasn’t going to be spoon-fed choreography anymore.  It was really up to me to pick everything up and pick it up fast.  That was a big shock as I didn’t have much experience learning a lot of material in a week or so.  In my previous company we only did mostly classical ballets.  Classical ballet, with the exception of Balanchine, is pretty easy to pick up because we’re also doing it in class.  There is a name for everything – arabesque, pas de bourrée, pas de chat.  But in modern choreography, what do you call the movement that goes like (LW demonstrates an undulation from Chroma.)  Now I have to take responsibility for staying in shape.  Image is important, too, the way I present myself.  And living on my own.

AT: Anything else?   I think that the obstacles are actually the more interesting because you have to do something about them, you have to confront them.

LW:   That’s the biggest reason why I came here to SFB.  I was a big fish in a small pond where I came from and I got a bit stagnant.  I needed to be a small fish in a big pond; I needed to be around people who were better than me.  People who were going to make me try harder.  I forget sometimes I came here to be challenged and to be put to the test.  Sometimes I ask myself why everything is so hard, then I remember I came here so that it would be hard and I have to keep reminding myself of that.

AT: You said you were looking forward to the London tour.  Could you be more specific?

LW:  First, Ben Stevenson danced in London and I heard many stories about him performing there.  Then, I am excited to be dancing on the stage at Sadler’s Wells, where the Royal Ballet first started.  London is such a historic city.  As a little kid I was obsessed with the idea of a monarchy – crowns and royalty.  I had books on medieval history and loved castles.  I have to go to the Tower of London and see the crown jewels and I really want to go to Bath, but it’s probably too far.  I love all the English movies – “The Young Victoria,” “The Duchess,” and “Pride and Prejudice.”    Maybe the British audience doesn’t, but I do. I also enjoy British comedies like “The Vicar of Dibley”, “Absolutely Fabulous,” and “Skins”.  And it would be great to meet some of the local dancers.  I’m open to making friends and maybe being shown around the city.

Lonnie Weeks will be performing in all the ballets shown at Sadler’s Wells except for Possokhov’s RAkU, so you shouldn’t have much trouble catching him. 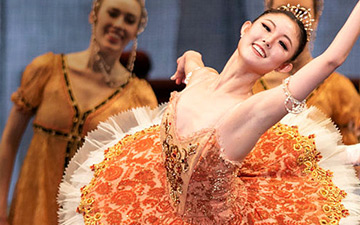