What a difference a year makes. San Francisco Ballet performed with polish and confidence in this season’s Sleeping Beauty, a world apart from last season’s unsteady run, though they still get insufficient support from Artistic Director Helgi Tomasson’s opulent albeit ill-conceived Byzantine-themed production, set in Russia pre- and post-Peter the Great.

The fairies opened the Tuesday 12 March performance with solid, technically clean dancing. Kamryn Baldwin shone especially as a spellbinding Serenity, alongside Elizabeth Powell (Tenderness), Julia Rowe (Generosity) and Norika Matsuyama (Courage), plus apprentice Jasmine Jimison making her debut as Playfulness. One can only imagine Jimison’s nerves, because she didn’t reveal any; she made her Bluebird debut earlier in this run, so she seems to be an up-and-comer.

Jennifer Stahl performed a tidy Lilac Fairy with clear, legible mime; her characterization would benefit from more dramatic motivation. That’s true across the board—inconsistent acting continues to beleaguer the company in story ballets. Ludmila Bizalion’s Fairy of Darkness was vastly out-eviled by her plague-masked minions, whose beak-pecking of Catalabutte (renamed as the vague “Master of Ceremonies” and played by Val Caniparoli) was mirthful retribution. Still, Tomasson’s libretto minimizes the Catalabutte subplot and eliminates the weaving women outside the palace gates, so while the story is legible, it helps to wear magnifying specs.

The performance was thrilling even so, because it marked the Aurora debut of soloist Wona Park, whose Kitri debut in the season-opening Don Quixote got loads of buzz. At just 19, she dances with an ease beyond her years, and a gracious, elegant movement quality that smooths over any evidence of effort. She seemed to sail through the Rose Adagio’s multiplying pirouettes and crisp jetés, and later in manèges, her wedding variation and one fish dive after another.

In the Rose Adagio’s partnered attitudes, Park tended to lean forward and lose balance when her hand was released, the only notable technical blip. Dramatic coaching could help Park develop Aurora’s joie de vivre in Act I and a more complex sense of longing and mystery for the Vision. The mature Aurora of Act III seems to come naturally to Park, but it needs that contrast to show Aurora’s transformation.

Angelo Greco, SFB’s reigning danseur noble, gave Prince Desiré a sense of brooding and purpose: a young man accepting of his destiny as a royal scion, yet longing for a more modern style of true love. Greco is famed for his wild abandon onstage, but here he modulated his energy to conjure a refined character whose star turn as a romantic hero is secondary to his duty to make the ballerina shine.

Costumes should define and differentiate a show’s characters, but sadly they blur in Jens-Jacob Worsaae’s monochrome palette, which veers from garish 1990s Phantom for the Act III polonaise couples to joyless neutral for the fairies. Wonderfully sparky but only subtly discernible by color, the Jewels danced with camaraderie and high energy, including former English National Ballet First Artist Madison Keesler reprising her radiant Sapphire. Lonnie Weeks and Diego Cruz soared through their cavalier choreography. Savvier pauses would boost the humor of Baldwin and Sean Bennett’s White Cat and Puss in Boots. Esteban Hernandez looked strong as Bluebird, while Thamires Chuvas needs seasoning and more strength to pull off the Princess. 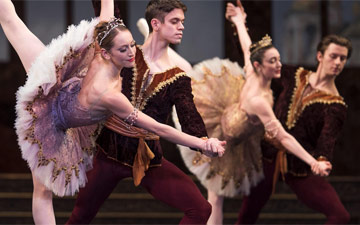