It’s the opening night of San Francisco Ballet’s 80th season and a far cry from last week’s gala, at least in the audience wardrobe department as I can walk down the aisle to my seat without being blinded by a surfeit of sequins. The newly acquired Suite en Blanc by Serge Lifar starts off the program and, sadly, only reinforces the impression I formed of it at the gala when the company danced excerpts. This large work, for ten principals, seven soloists and a corps de ballet of twenty, was and remains a bit of a mess. I can forgive occasional lapses in synchronisation for the corps de ballet on an opening night and even the rare misstep of a principal dancer, but when the timing is repeatedly amiss and almost the entire troupe dances without any idea of what its style should be, then I can be heartless; after all, a professional company is supposed to do more than just show up and do the steps.

At first I assume these problems are due to a lack of rehearsal time, but, as I learned from my inside “spy”, if anything it received more than the usual amount of rehearsal. I hope I’m correct in concluding that Maina Gielgud, who staged it, is responsible. Even more surprising is that she has danced and set this ballet throughout most of her long career and was even coached by Lifar himself. Despite whatever quotes of hers appear in the program book – for example, “The fun is to indulge in the style, flirt with it, sell it. Treat it like a contemporary ballet.” – she has failed to impart her own wisdom, at least to this company.

Fortunately, there are three dancers who manage to shape their interpretations and emerge with their artistry intact. In “Cigarette”, the languorous Sarah Van Patten moves through space like wafting smoke that signals terminal boredom, only to interject a quick rap of her pointe to wake us up. At times she even flirts precariously with crossing the line into tongue-in-cheekiness. Davit Karapetyan makes the “Mazurka” plain fun with its folkloric gestures flavouring his strong stage presence and elegant technique. And finally, Maria Kochetkova in “Flute” with its sinuous melody, gives us a lesson in the rubato of movement, holding that extra fraction of a breath then rushing on when it suits her. (Suite en Blanc is a plotless ballet set to excerpts from Édouard Lalo’s 1882 ballet, Namouna, and keeps the names of the musical sections even though they no longer relate to any story.) I hope that the company grows into this work as the bits I viewed on video of the Paris Opera Ballet’s rendering are delightfully energetic and capture a French sensibility. The choreography itself is not of the highest caliber, particularly for the large groups, but there are wondrous gems of phrases scattered here and there. All the more reason that the dancers need to shore it up with their own sheer exuberance and technical and artistic abilities.

In the Night is one of choreographer Jerome Robbins’s masterpieces, if not a masterpiece of the twentieth century. I could watch it again and again yet never grow jaded. Set to four Chopin nocturnes against a star-filled sky, each of three couples reveals the many facets of their own relationship, which in turn contrasts sharply with the inner dynamics of the other two partnerships. The young and ardent couple, Vanessa Zahorian and Ruben Martin Cintas, the regal and still tenderly supportive pair, Sofiane Sylve and Tiit Helimets, and the tempestuous twosome, Lorena Feijoo and Pierre-François Vilanoba, all seasoned veterans, bring out the intricacies of the choreography and the emotional shadings. Having a ballet like this in the repertoire over the years means that the dancers have the opportunity to delve into the roles and experiment with their interpretations. San Francisco Ballet has a tendency to favour a larger body of ballets with fewer performances of each piece than a smaller collection of works that are meticulously developed and maintained. Quantity versus quality. All great international dancers had/have the chance to perform their signature roles dozens of times and that is the path to fulfilling artistic potential. Even a genius needs more than two or three times on stage in a new ballet both to grow as an individual and to establish rapport with the other dancers. A pity that most of the dancers aren’t given the chance to grow that way.

The highly anticipated world premiere of Wayne McGregor’s Borderlands, commissioned by SF Ballet, meets with a standing ovation. The SF Ballet audience has only seen two of his ballets, Eden/Eden, created for Stuttgart Ballet in 2005 and staged here in 2006, and Chroma, made for the Royal Ballet in 2006 and shown here in 2011. (I did see McGregor’s own company Random Dance when they performed at Yerba Buena Center for the Arts in November 2011.) The reasons this audience loves his work so much are that it is radically different from the rest of the SF Ballet repertoire and the dancers, responding enthusiastically to working with him, deliver performances that are truly on fire. It would be easy to dismiss him as a one-trick pony because his pieces have a tendency to look the same. But perhaps that is because we don’t understand his language very well yet. The real question is – is it worth learning? The elements common to all three pieces include totally non-classical contortions, frenetic tempi, dim lighting, pale skimpy costumes and electronic music. But to McGregor’s credit, he combines them in different ways in each of the three ballets, and the overall structure of each one has its own form. Borderlands keeps evolving throughout – the “music” begins as harshly aggressive and full of static and scratchiness and by the end has morphed into a gentler soundscape that hints at the reverberation of an organ and the voices of a choir. The dancing, too, starts out with wildly flung limbs and over time slowly becomes simpler and calmer. There is an exquisite pas de deux with Maria Kochetkova and Lonnie Weeks seamlessly moving together while bathed in soft orange light. For the moment I’ll enjoy the good parts of this piece, but the jury is still out on its relation to McGregor’s entire oeuvre. Stay tuned. 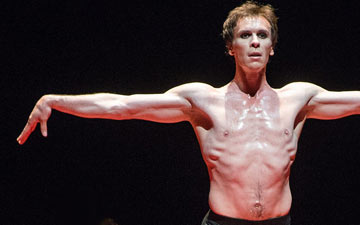