A choreographer’s voice is like a key – it’s not a guarantee of sublimity, of course, but it opens the door to his inner world. Trey McIntyre is a man who follows his own compass; how else can one explain his decision to base his fledgling company, Trey McIntyre Project, in Boise (Idaho), back in 2008? Boise was no hub of contemporary dance, but he found a receptive community there, and the space to think, far from the crowd, and to make the kind of work he wanted to make, rather than jump from project to project as many young choreographers do. He has begun to form a body of work, dances that express heartfelt, conflicted emotions that seem to spring from the soul of a sensitive boy lurking inside the man. His best works – at least of the ones I’ve seen – reflect an aspect of the American social experience: growing up, finding one’s way in the world. “What experiences form us and break us?” he seems to be asking. Bullying, confusion, gender dynamics, the desire to be included and, if all goes well, the hope of finding love. His Leatherwing Bat, from 2008, is a good example, a suite of dances set to childrens’ songs by the folk group Peter, Paul and Mary, revealing the anxiety embedded in childhood, but also the importance of tenderness and of the imagination. A similar territory was mined in the recent Oh, Inverted World, for Smuin Ballet, set to songs by the Shins. Sporty, healthy kids, sexual but not yet quite adult, grope their way through the minefield of adolescence. Feelings are hurt, relationships formed, and every so often, real enjoyment attained. McIntyre’s dancers reflect his inner world: strong, athletic, open-hearted, relentlessly energetic, sexual but somehow innocent.

This week at BAM’s new Fishman Space, the Trey McIntyre Project presented a combined evening with dancers from the Korea National Contemporary Dance Company. This cross-cultural encounter came about as part of a government-sponsored residency, one of those well-meaning projects meant to foster cultural exchange. McIntyre’s small troupe toured Asia and chose to partner with the young Korean ensemble, the first in the country devoted exclusively to contemporary choreography. It is led by the choreographer, Sungyop Hong, who, on the evidence of the BAM program, is responsible for a significant portion of its repertoire. (All the non-McIntyre works at BAM were by Hong.) Both companies have a strong base in ballet technique. McIntyre was a member of Houston Ballet; Hong performed with the Universal Ballet Company in Korea. As a part of the exchange, a group of Korean dancers came to Boise to take part in the creation of a new work by McIntyre, The Unkindness of Ravens. The BAM engagement included this work, three short excerpts by Hong (Mosaic, Flame, and Can’t it Really Be Helped?), and two additional dances by McIntyre (Bad Winter and Ladies and Gentle Men). The strongest was the last, Ladies and Gentle Men, which premiered not too long ago at Jacob’s Pillow.

The weakest of the lot was The Unkindness of Ravens; collaborative efforts are not easy, especially when they are cooked up over a short period. The two companies are just similar enough – contemporary, ballet-based – to make the project even more complicated. McIntyre couldn’t really play with contrasts, but the similarities between the two were only superficial. Ravens suffered as a result; McIntyre took the perhaps inevitable path of making it a work about cultural crossings and misunderstandings, filtered through the lens of humor and the juxtaposition of musical forms. Clad in a kind of absurd pilot drag that included a leather cap, fake villain goatee and black removable wings, one of the Korean dancers, Sojin Lee, told a joke in a jumble of Korean, Spanish, and English. “How many choreographers does it take to screw in a light bulb?” The punch line, “5-6-7-8!,” became the intro to the musical hodgepodge, which included Korean chants, the jazz tune I’ll Never Have to Dream Again, and Johnny Cash’s Ring of Fire. The dancers lip-synched, prowled the stage in a rough-and-tumble group, threw a squeaky toy and engaged in McIntyre’s vigorous partnering, slicing the air with arms and legs. By the end, an American dancer was trying a few lines in Korean. It all felt like an experiment in getting to know each other and didn’t amount to much.

The three excerpts by Hong revealed a very different style; each felt like a miniature, an isolated image. The only unifying quality seemed to be a kind of theatricality and sense of the absurd quite at odds with McIntyre’s heart-on-the-sleeve sincerity. The first, Mosaic, was the most intriguing. The beautiful, long-limbed Yoonhee Lee seemed caught in a dream as she slowly unfurled her legs in space and a group of men hurried to place white squares in the precise spot where her foot would land. A cellist, wearing sunglasses and a suit several sizes too large, played the slow movement from Hindemith’s third cello upstage right. In Flame, another female dancer, Anlee Chang, moved nimbly through phrases which at first recalled Cunningham’s style of contrasting fast with slow, sharp with fluid, or wiggling the torso while the rest of the body is in repose. After a few moments, she began literally to create sparks by rubbing a rough substance concealed in her hand against her costume, as if lighting a match. This oddly compelling image seemed to turn her into something not-quite-human, an angel or a superhero. The weakest was the third, Can’t it Really Be Helped?, in which the dancers at first carried blackbirds on branches, then set them aside to engage in rhythmic, unison stomping, a bit like watered-down Ohad Naharin. It’s clear that Hong is influenced by many sources, but it’s difficult, on such slim evidence, to distinguish a unified approach. It must be said, though, his dancers are lovely, and not only the women.

In the two McIntyre works that closed the program the choreographer’s voice returned strengthened, all but obliterating what had come before. Bad Winter (made earlier this year) centered on an awkward, push-and-pull pas de deux, in which a young man (Travis Walker) and woman (Ashley Werhun) tried hard to connect. At first he seemed paralyzed with fear, squirming alone as she sat, legs stretched in a wide V, watching him from a distance. Finally he took the plunge: the two came together, his lips on her neck, her torso convulsing, but the matter did not end there. She caressed him, he pulled away; he threw his leg over her, she straddled his back; she pulled away, only to fall back into him. By the end they had come to a kind of exhausted truce. Subtle it wasn’t, but then, subtlety, like humor, isn’t really McIntyre’s style. Ladies and Gentle Men, first seen at Jacob’s Pillow this summer, fared better because it created a more complete world, peopled with unique characters. A meditation on the nineteen-seventies American TV show and album Free to Be You and Me (which serves as its soundtrack), it is a heartelt anthem to individuality. Yes, it’s sentimental, with its morality tales told (or sung) in child-like voices, but McIntyre has the courage fully to embrace his emotionality. It’s clear he’s a “gentle man,” formed by but not unquestioning of the feel-good philosophies of the seventies. Free to Be’s characters are children striving to find themselves: boys who like playing with dolls, girls who have no desire to become “ladies” when they grow up. Bullying rears its ugly head in a trio for three gray-suited men; the sensitive kid gets beaten up by the other two and cries out in pain. In “Girl Land,” one of these gray businessmen brutally thrusts his hand into a girl’s party dress, a kind of rape. By the end, dresses and suits are shed, revealing an underlayer of wildly-colored dance clothes. The pouffy dresses become puddles of color on the floor, and then, during the bows, wild wigs and capes for both the men and the women.

McIntyre’s talent for reaching into the heart of our child-like natures is a quiet reprieve from the cool distance of everyday life. But a succession of McIntyre dances also reveals another, less appealing fact: the relentlessness and repetitiousness of his style. There are certain moves he likes a lot: super-fast turns with one leg held out, energetic turning jumps in attitude, awkward lifts, falls, turns in general. The dancing lacks flow or contrast; it doesn’t build toward something. The musicality is a little roughshod. There’s a lack of stillness, of legato stretch, of contrast. It’s as if his dial were stuck at fortissimo. Still, he has something to say. Perhaps sometime he might try to say it more softly. 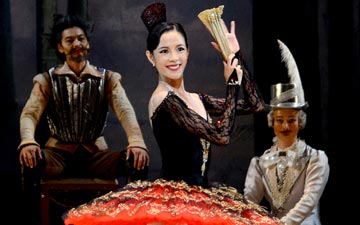 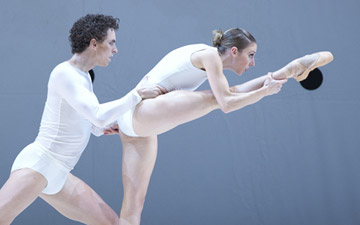