It’s the Royal Ballet’s varied and unique repertoire that has kept me loyal to the company through some very thin times as well as the golden seasons, and this programme is  a nice example of what a flick through its back-catalogue can produce. They could actually have danced this programme almost 40 years ago (and did, for all I know) but Firebird is the only one of the three pieces that  has ever been in danger of over-exposure, and even that came up looking freshly thought-out and newly involving in the first performance of this short and sold-out run.

Firebird’s overture starts so quietly that it takes a few moments for everyone to even notice that it has begun; but then it begins to impose itself and – particularly at the rather slow pace Barry Wordsworth chose –  it sets the scene wonderfully . The curtain goes up and the Firebird flashes across the stage – Itziar Mendizabal, making her company debut in the part,  her long arms  making sharply-cut patterns in the air as she flies. She has the strength of both technique and personality for the role, and apart from one or two moments where she seemed to lose her focus, this was a fine performance.

Bennett Gartside, also making a debut, was Ivan Tsarevich. He’ s usually played as a rather simple young man, and Gartside took that idea further, making him a complete naif, gleefully pleased when he finally captures the Firebird and treating her attempts to escape almost as a game. The arrival of the Beautiful Tsarevna (Tara Bhavnani, also trying her role for the first time) makes him grow up a little, and the  instant before they kiss had a dramatic tension I’ve never noticed there before.  By the end of the ballet – the wonderful moment when he slowly raises his hand and the curtain falls – he was a real prince, ready for serious responsibility. I was very impressed.

I remembered In the Night from a handful of Royal Ballet performances in the early 1970s with some pleasure, and was pleased to see it restored to the repertoire. Sadly, though, I enjoyed it rather less this time round. Robert Clark’s playing of the Chopin pieces was not at all to blame – partly it’s the piece itself: three pas de deux, showing three couples at different stages of their relationships, with an entirely gratuitous finale in which they all meet and stroll around a bit, exactly as at the end of Dances at a Gathering but with no dramatic justification this time. And partly it was the casting.

If we are to believe the notes in the programme book, the first couple  are ‘a youthful pair lost in heedless ecstasy’. No. Sarah Lamb and Federico Bonelli are beautiful dancers, both of them, but far from being passionately in love they seemed to be at the stage of cautious exploration, each of them ready to back off  if things didn’t work out. Realistic perhaps but low on theatrical impact. Zenaida Yanowsky and Nehemiah Kish were the stately couple in the second section, stepping their way through what could perhaps be a meeting in public, emotions well under control and only the tiniest signs giving a hint of what was going on beneath the surface. They make a handsome pair but this too was rather underwhelming in dramatic terms.

Plenty of drama, though, in the last section, with Alina Cojocaru and Johan Kobborg taking us through the various stages of a full-scale marital row.  (Kobborg’s costume was new, I think – black tights and jacket with a white shirt and tie, reminding me strongly of his appearance in Onegin and making  me wonder if this is how Onegin and Tatiana’s life would have turned out if she’d given in and run away with him.)  The way they dance together is a wonder these days, especially in the lifts where you simply don’t see the mechanism, just the effect, and their emotional response to each other is very finely tuned. But how I dislike the message of this encounter: the price of forgiveness is total abasement. A Lynn Seymour could perhaps bring off the moment when she prostrates herself at her lover’s feet, doing it in a fit of diva-ish exaggeration, but done – as Cojocaru does it – with apparent total sincerity, it’s very uncomfortable indeed.

It’s a real surprise to learn that it’s 9 years since we last saw Act lll of Petipa’s Raymonda, in the version produced for this company by Rudolf Nureyev: it’s a gorgeous piece, a real test of the classical strength of the company, and an audience favourite – it never fails to win a round of applause just at the sight of Barry Kay’s opulent setting.  There was some nice dancing from the female  soloists, some rather less disciplined work from the male pas de quatre, and a joyous account of Raymonda herself from Yanowsky. It’s  very good to see her in a role that she so very obviously enjoys – I’ve never seen anyone do the hand-clapping solo with such relish, and she projects so well that the people on the back row of the amphitheatre must get as much pleasure from it as those downstairs.

Most of all, though, it’s Petipa who sends us home happy: if you think Balanchine’s finales are exciting, you should see the work of the master from whom he learnt. There’s a bit where the whole cast dances off sideways into the left-hand wings and then instantly reappears, couple by couple in a long line:  the whole manoeuvre so unexpected that it’s just exhilarating. And just once I’d like there to be a camera in the wings so we could see how they sort themselves out – It must be quite a sight. 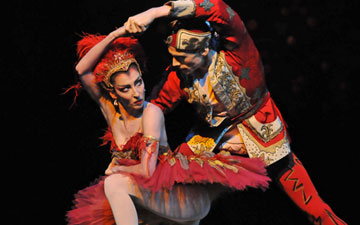 Gallery – Royal Ballet in The Firebird, Raymonda Act 3 and In the Night 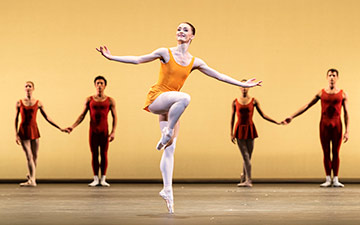 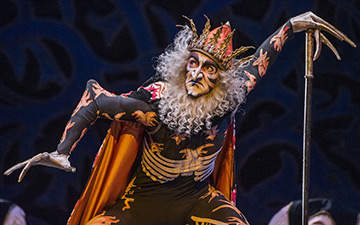