For most ballet-lovers, The Sleeping Beauty is the supreme accomplishment of 19th century classical ballet. It was certainly the happiest of the three collaborations between Tchaikovsky and Petipa (the others were Swan Lake and Nutcracker). It inspired Tchaikovsky’s greatest score for ballet, so good it can stand on its own, and also Petipa’s most challenging and inventive choreography (challenging because so inventive). It opened in St Petersburg in 1890 to enthusiastic response and has remained an audience favorite ever since. Boston Ballet’s version is based on the Ninette de Valois production which inaugurated Covent Garden in 1946 right after World War II – a superb production and a vivid reminder of why it was we had fought the war.

It’s an incredibly rich ballet because it weaves together at least three different strands of meaning which operate simultaneously: pure spectacle, an endorsement of royalty, and the narrative of a girl who goes from cradle to altar in the course of three acts.

As for spectacle, it has everything you could possibly want: a huge cast, great variety of characters (peasants and princes, clowns and courtiers, fairies and foreigners), a wealth of colorful incident, lush costumes and elaborate sets, a varied and magnificent score and brilliant choreography of endless ingenuity. Seen as an endorsement of monarchy, it helps to recall that the ballet was produced for the Mariinsky in St Petersburg, a company sponsored and funded by the imperial Romanov court. The 17th century costumes evoke Louis XIV, the Sun King, Europe’s most famous monarch. In other words, we’re being shown that a society ruled by a king and queen is the best of all possible worlds: people know their places and treat each other with decorum and respect, a ceremonial etiquette rules everywhere, there’s no confusion of class (the princess marries the prince after all), and the disorder of the outside world where sorcerers like Carabosse create evil is kept safely at a distance. It was a message the Tsars never tired of hearing. But the emotional strength of the ballet comes from its libretto, which narrates the education of Princess Aurora who begins in infancy, arrives at girlhood only to be cursed by a witch and fall into an enchanted hundred-year sleep, and then, all evil dispelled, awakens into a natural order whose restoration is symbolized by her marriage to Prince Désiré.

The opening night Aurora and Désiré were danced by Misa Kuranaga and Jeffrey Cirio, a superbly matched couple who have become a standard in the company. In any Romantic ballet, whenever you see one you’re virtually certain to see the other. Kuranaga dances with the fluidity of a summer breeze but with steely precision. Her technique is flawless, her balance uncanny, her leaps buoyant, and her presence infinitely charming. I’ve rarely seen a better Rose Adagio, and her slow backward turns with revolving arms in the same act were miracles of beauty. Cirio, an equally impressive dancer with fresh presence, superb technique, and beautiful line, keeps going from strength to strength. I’ve said it before but I’ll say it again: I’ve never seen a dancer, male or female, improve as much in such a short time.

Most of the so-called minor roles were also performed with distinction. Erica Cornejo was the best Carabosse I’ve ever seen: all three Furies rolled into a single Harpy from Hell. The five fairies who present the infant Aurora with gifts were uniformly commendable, and in Act III Kathleen Breen Combes as Princess Florine gave a superb performance with Joseph Gatti as her admirable Blue Bird. But for me the surprise of the night was provided by the Pas de Trois with Soloist Whitney Jensen, new corps member Seo Hye Han from Seoul (gold winner of last June’s Boston International Ballet Competition), and new Second Soloist Alejandro Virelles from Cuba. I’ve long admired Jensen but had never before seen Han and Virelles. I recall Han’s performance in last June’s Competition and was thrilled to see her dance again. She’s fluent, strong and a personification of loveliness. Virelles is a tall, lean, handsome young man with amazing extension and the kind of control you expect from Cuban dancers. Remember those names; you’re bound to hear them again before long.

At the matinee the following day, Soloist Ashley Ellis performed her first major role as Aurora. She was adequate but shows much room for improvement. Her jetés were surprisingly weak and overall her dancing lacks fluidity and amplitude. She also needs to work on her acting. Her Désiré was Nelson Madrigal, a dependably good partner and a good actor, despite his Huck Finn grin, but a dancer who has never in the many years I’ve seen him left me with a lasting impression. Kathleen Breen Combes was a superlative Lilac Fairy, and Misa Kuranaga and Jeffrey Cirio brought their dazzling talents to the roles of Princess Florine and Blue Bird.

At the evening performance the same day, Lia Cirio danced Aurora. She was unsteady throughout the Rose Adagio and once lagged so far behind the orchestra she had to skip a passage, but she recovered by the end of the act. She has an impressive technique but her overbite and fixed smile detract from what otherwise could be impressive performances. Her partner, Lasha Khozashvili, has a pleasing presence but is not always a good partner. And sadly, the two generated little electricity. Dusty Button as Lilac Fairy was another dancer appearing for the first time in a major role but she was far out of her league. In all three performances Gino diMarco brought his delightful and vivid presence to the role of Catalabutte, and Jonathan McPhee led the orchestra with his customary intelligence and skill.

I found it interesting that the arc of the three performances went from WOW to Ho-hum. Although for many years now the company has had a very strong corps, it’s been weak in the higher ranks. There are superb soloists and principals, true, but there’s also a lot of dross there. Some dancers are getting long in the tooth and some have never been up to the standards expected of a company that claims it’s world-class. Moreover, some of the company’s best dancers weren’t on display. It seems odd to hide any of your leading lights under a bushel, so here’s hoping those lights shine forth in the remaining productions of the season. 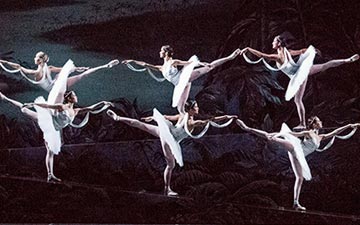 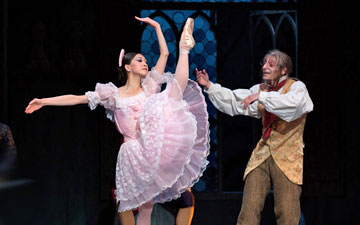