For its fourth offering of the season, Boston Ballet presented a triple bill called Shades of Sound (anybody’s guess): Wayne McGregor’s Chroma set to music by Joby Talbot and Jack White (2006), Balanchine’s Episodes to selections from the orchestral works of Webern (1959) and Hans van Manen’s Black Cake to music by Tchaikovsky, Janacek, Stravinsky, Mascagni, and Massenet. We saw Chroma here in 2013, but the other two ballets were Boston premieres.

Wayne McGregor created Chroma in 2006 – an impressive calling card that saw him rapidly appointed as resident choreographer of the Royal Ballet. It was instantly popular and soon became a contemporary classic, and anyone who has seen it knows why. Performed on a bare white stage with a white backdrop punctured by a large rectangle maybe three feet off the ground, it features a company of six men and four women, all looking like they’ve just stepped out of the shower wrapped in pastel towels. A woman begins undulating like a rutting snake and then is suddenly airborne in liquid leaps. This movement from angular to fluid runs throughout and heralds other oppositions: solo/ensemble, fast/slow, ugly/beautiful. But the piece has less a split than a multiple personality. Arms flail like semaphores, dancers are dragged across the floor, women perform grotesque hyperextensions, and then once again back to the lyrical and the lovely. The piece is also suffused with generosity as dancers casually stroll on and off stage and frequently change partners, dancing in duets, trios, quartets, and so on to the full ensemble. By the end of the piece, they’re like a ballet kibbutz, all performing in a state of companionable brio.

The rectangle of the backdrop is one of the most evocative minimal sets I’ve ever seen and an important presence in the piece, creating an additional dimension to the stage as the dancers enter from it by stepping down onto the stage. Its frame within a frame heightens the drama of the piece, so kudos to designer John Pawson.

On opening night, my first viewing of Balanchine’s Episodes confused and annoyed me, for I thought it one of the most unattractive things I’d ever seen. Balanchine certainly had an appetite for awkward and ungainly movements but usually used them to great effect, as in the Rubies section of Jewels where the dancers walk on their heels, women turn on point with the other foot flexed, straight-legged women stutter on point, etc.            But in this dance the ugly seemed to overpower everything else, so I was surprised to learn that its premiere had been greeted with rapturous reviews.

I was even more surprised the second night when I became mesmerized by the beauty of the piece. How to account for such opposed responses? I think that the first time through, all I could see was that Balanchine was twisting or tweaking or reshaping virtually the entire vocabulary of classical ballet, so I felt like someone forced to speak a foreign language for the first time. My viewing was effortful and extremely uncomfortable. By the second performance, I had somehow achieved fluency in this new language and felt comfortably at home. The discomforting novelty of these strange movements was gone and I was free to enjoy the wealth of formal invention the piece contains. (The changing positions of the women’s legs alone is worth a sonnet sequence.) And I was better able to appreciate the undeniably beautiful, as in the fourth movement to Webern’s transcription of Bach’s A Musical Offering where everything outré has vanished and we’re in the presence of choreography that’s stately and ceremonious, like a medieval Mass, with the dancers assuming positions of reverence and prayer. As one spectator put it, we’ve entered “a more familiar paradise.”

The evening concluded with the high camp Black Cake by Dutch choreographer Hans van Manen, which presents six couples in black cocktail attire living a little lifetime in half an hour. We begin with the exaggerated romance of waltz and tango: women place both hands on one hip, arms crooked, and with tilted heads gaze at the floor. In the second section a woman moves languorously in a squat position while her partner tiptoes after, then bounces her like a basketball. Next, an impassioned couple clings and quarrels until she finally rejects him. In the final section we’re at a raucous cocktail party where the dancers drink until they’re tipsy, become boozily cheerful and tearfully maudlin, and then sober up in time to bid us adieu. It’s to van Manen’s credit that he pulls it off, for few things are harder than signaling you intend to be witty and then doing it, which is why novelists who claim a character is witty almost never report the character’s dialogue.

Kathleen Breen Combes, always an immensely satisfying dancer, was splendid in all three ballets, and Whitney Jensen, Dalay Parrando, and Sabi Varga gave abundant pleasure each time they appeared. Though performing only minor roles, Junxiong Zhao continues to amaze with his brilliant form and gorgeous line.   It was a special treat to see principal dancers performing with new partners. I’d never seen Lasha Khozashvili dance with any woman except Lia Cirio, but he was a new man with Ashley Ellis and Dusty Button in Episodes and Black Cake , and they in turn were energized by him. Jeffrey Cirio is almost always paired with Misa Kuranaga, but in Black Cake he danced with Erica Cornejo (who stole the show with her boozy smiles and tipsy wobbles), and he looked taller and more mature while Cornejo also appeared in a fresh light.

Conductor Jonathan McPhee’s version of the Webern was a bit muddy, but otherwise the orchestra performed well. Chroma and Black Cake received standing ovations at all three performances, which in Boston is a genuine tribute, unlike New York where even dancing seals routinely receive such responses. All three performances brought home the fact that this is a very strong company with the skills to perform any choreography that comes its way, from the classics to the latest cutting edge contemporary work. Bostonians should thank their lucky stars. 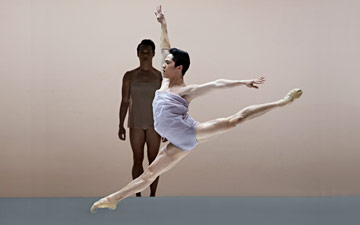