English National Ballet’s Artistic Director Tamara Rojo said: “Le Corsaire is one of the great classics created by Marius Petipa for the Mariinsky Theatre. Like all great Russian classics it is a true epic story that offers drama, an exotic landscape and the best pyrotechnics of the classic technique. It’s a men’s ballet, with heroic and passionate characters and with the famous pas de deux that made a legend of Nureyev when he first performed in England with Dame Margot Fonteyn. This is a unique and unmissable opportunity as it has never before been performed by a British company.”

“We are working with Anna-Marie Holmes who created this version more than a decade ago and she is willing to change it to make it specific for us.

In reinventing Le Corsaire we have the chance to go through the whole narrative and look at it with fresh eyes, making it even better and personal to the Company.

“I am excited that this is a ballet with four male principal roles.  Unlike many of the classics it will give great opportunities to the men in the Company to show off their skills and athleticism.

“We are also re-orchestrating the work because there have been many additions over the years.  I want the music to sound more romantic and cleaner as it would have originally.

“And I am thrilled that Bob Ringwood, the amazing designer of Batman, has agreed to design the sets and the costumes.”

Bob Ringwood, whose film credits include Batman. Alien 3, Star Trek Nemesis and Troy, explains his ambitions for the piece:

“Designing Le Corsaire, I thought it would be interesting to bring out the romantic and historic elements of the original ballet.  I hope to capture the flavour of the Romantic period in which it was first staged. The sets and costumes are based on original paintings, prints and engravings of the mid 19th. Century to capture and infuse the essence of the period. I felt it was important to bring out the romantic, sensual and erotic elements of the piece, that have been so neglected in recent productions. The sensuality of the women and bravado and swagger of  the men, for us all to enjoy those heavily scented and perfumed Arabian Nights that so captivated Orientalist painters and writers of the second half of the 19th Century.”

Le Corsaire is based on Lord Byron’s poem Corsaire and tells the story of Conrad, a dashing pirate, and his love for Medora, the beautiful harem girl. It is a swashbuckling drama of captive maidens, rich sultans, kidnap and rescue, disguise and conspiracy, love and betrayal, culminating in a shipwreck which is one of the most breath-taking spectacles in ballet.

The Christmas Season 2013 will also include the family favourite The Nutcracker. Both productions will be generously supported by Swarovski.

Autumn tour and Christmas at the Coliseum

Alfa Banking Group Alfa Bank is sponsoring English National Ballet’s production of Le Corsaire in its London season.  Petr Aven, Chairman of the Board of Directors at Alfa Banking Group, said: “I am delighted that we are partnering with one of Britain’s greatest dance companies. Alfa Bank strongly supports building ties between the UK and Russia, be they in the business, economic or cultural spheres. Alongside bringing inspiring Russian work, like Le Corsaire, to British audiences, I hope this sponsorship will also shine a light on English National Ballet’s young Russian dancers.”

English National Ballet is launching a Production Appeal to help fund the new production of Le Corsaire.  A new production is a huge financial and creative undertaking, costing hundreds of thousands of pounds and involving armies of makers, technicians and artists. For more information and to donate go to www.ballet.org.uk/productionappeal or call the Development Department on 020 7581 1245.

English National Ballet brings its acclaimed production of The Nutcracker to Liverpool in November and back to the London Coliseum for its annual Christmas season.

Set in a frost-covered, gas-lit London, it features Clara, her Nutcracker doll and the magician Drosselmeyer in this traditional, festive tale for all the family. On an enchanted Christmas Eve, under the heavy boughs of the candlelit tree Clara battles with the Mouse King and falls in love with a handsome stranger. As the air grows colder and snowflakes begin to fall, Clara and her valiant Nutcracker take a hot balloon ride across the frost-dusted London skyline to the glistening Land of Snow where her adventure really begins.

In a world of Edwardian elegance, The Nutcracker brings to life the eternally popular Tchaikovsky score featuring the Dance of the Sugar Plum Fairy and the Waltz of the Flowers.  This classical production is a magical, memorable and unmissable Christmas treat.

***** – “…has an air of absolute artistic integrity” – Laura Thompson, The Daily Telegraph
**** – “The audience was clearly delighted” – Clement Crisp, The Financial Times
**** – “This is now a contender as one of the best Nutcrackers around” – Neil Norman, Daily Express 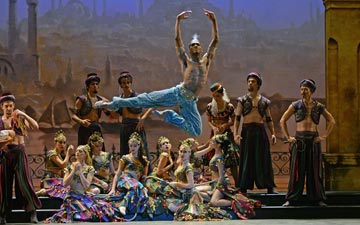 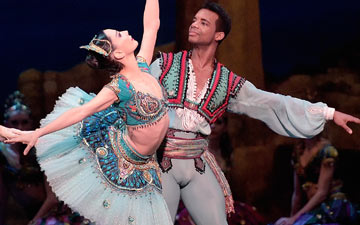 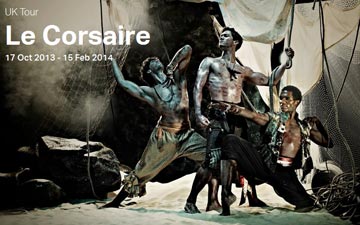