For the past ten years, since I first saw Shen Wei’s Folding, I have been an admirer of this artist’s work.  His commanding vision and painterly aesthetic make him one of the most intriguing contemporary creators working today.  Wei’s most recent piece shown here in San Francisco is Undivided Divided. Originally created during a 16-month residency at the Park Avenue Armory in New York, it premiered in November 2011.  Although lasting only 40 minutes, there is so much material to absorb that, like a boa constrictor after having swallowed a chicken, I am still digesting the entire animal, slowly and completely.

The performance takes place in The Forum, a large empty space about 77 by 87 feet with a 30-foot high ceiling and a wooden floor.  Seven-foot square white panels are laid out in a grid of six rows by six.  There are four-foot aisles between the panels that allow the audience to circulate inside the grid.  In two adjacent corners the panels are replaced by plexiglass cubic rooms seven-feet in all three dimensions; two others are filled with plexi cubes stacked up like sculptures.  Two more are covered in bungee cords; another pair have thick hunks of hair or fur; many of them have plate-sized puddles of paint in a variety colors.

Eighteen dancers lie on their backs, motionless, in half of the squares.  Both men and women are clad only in flesh-coloured lycra shorts.  They begin slowly to move while the music, a frequently haunting original score by So Percussion, alternates with Lawson White’s concrete soundscape.  The changing lights and video projections often create sudden shifts in one’s visual perception of time and space.  Sometimes the physical grid takes on the aura of being an ancient ritual site.  The dancers continue to move, rolling in the paint and making abstract art on the panels and the interiors of the plexiglass cubes at the corners.  One of the most powerful moments occurs when they slowly merge into performing movements in unison, all briefly pausing with one arm extending above their heads.

This format is new for Wei who previously created for the traditional stage.  He says “I am forever fascinated by what the brain knows and what it may not be aware of.  Because of this fascination, I have found endless parallels between the tangible world and our impalpable surroundings.” This is a rationale for wanting to allow the audience a closer inspection of, and interaction with, the dancers.  For most of the audience this may be the first time they have been so close to, and intimate with, live performers and I commend Wei for giving them this opportunity.  For us dance critics and former dancers there is no novelty.  Instead I find myself constantly irritated that spectators are always blocking my view.  I want to see everything and think about how all the parts relate to each other.  I slowly circumambulate the entire grid several times, reversing direction when something catches my eye.  At least I can find places where I can watch unimpeded.  At the corners I have clear sight-lines to observe two exterior rows at a time, often with seven or eight dancers in view.  Ultimately each viewer sees an entirely different show from every other audience member and also each time (s)he might see it.  (A Yerba Buena staff member told me later that one man was so enthralled that he came back the next day for both the matinee and evening performances.)  In many ways Undivided Divided reminds me of Sacha Waltz’s Insideout, (see my review below) another multi-media extravaganza that invites the audience to meander amongst the dancers.  However Wei’s piece is much more concise and does not attempt to manipulate the audience to watch the work in a specific way. The difference between watching a performance through a proscenium arch and walking through a space where dancers and audience share the very air they breathe, remains much the same as the disparity between being a voyeur and being an active participant.

The following is as received and not indexed…

excerpted from
Flash Review Dispatch, 11-14: Berlin Diary
Waltz from the ‘Insideout’; Video no Game for Paasonen

BERLIN — It was supposed to be a vacation, but somehow when I got to Berlin to see my friend Tomi Paasonen’s newest work, I learned I also had the chance to see Sasha Waltz’s latest piece. I had seen Waltz’s “Zweiland/Zweiland” in 1999 and “Allee der Kosmonauten” in 2001, both presented by Cal Performances at Berkeley’s Zellerbach Hall, but hadn’t written anything about either. I immediately e-mailed PBI to see if he could use a review.

“Insideout” had just premiered the week before at Waltz’s home base the Schaubuehne am Lehniner Platz when I saw it on October 17. It is an impressive extravaganza, an installation rather than a proscenium stage performance, in which the audience wanders among the dancers while climbing up and down and strolling in and out a jungle gym of rooms/performance spaces designed by Thomas Schenk; some are part of a large central construction, others free standing “buildings”; some are completely accessible to the spectators, others inaccessible. The central construction is modular with walls sliding in or disappearing, curtains drawn open or closed, plexiglass display cases filled with dancers or emptied through doors on the back. Off to the side there is a separate small room with a clear front wall and a grass roof with sand on the floor. Another free-standing space is an aluminum refrigerated compartment with plastic strips hanging across the door.

The costumes by Bernd Skodzig run the gamut from g-string, to scanty underwear, to bathing suits, to loose pajama tops and pants, to street clothes, to grunge garb, to evening dress, to uniforms, and finally the poster image, a highly stylized suit, pants and platform shoes with stiletto heels all joined into one seamless piece, topped off by a hat plus head covering, all of an overblown black and white hounds-tooth check.

I am certainly awed by the level of coordination between the wardrobe and tech crews and the dancers as the logistics of maintaining a smooth-running show here certainly seem to surpass the choreographic complexity. (Who knows if the audience noticed, but as a former dancer and choreographer, I am fully aware of this achievement.)

The evening begins quietly, the audience seeping across the space, sampling the various sites where the dancers are moving slowly and simply to musicians playing Rebecca Saunders’s very spare composition, “Solos, Duos, Trios for Ten.” The effect is like looking through a kaleidoscope turning nearly imperceptibly. At first I assume that I will have time to make the rounds and take in all that is going on, but then it becomes apparent that nothing is going to be repeated and, under these circumstances, whatever I happen to see is what I get. Slowly the pace picks up and our inner voyeurs capitulate to the surrounding action. It is obvious that there is no way any one observer can see everything. Each member of the audience will have an individual experience of the performance, as in life. At one point I feel a rush of elation, as if I were Alice in Wonderland.

A woman fills her pantyhose with sand from a row of bottles. As it settles around her ankles, one word comes to my mind: elephantiasis. She lies down, raises her legs, pulls at the knit nylon, and like sands flowing in an hourglass, the response to gravity endows her thighs and hips with a gritty voluptuousness. Eventually she walks through several rooms with now sand bloated feet and is lifted by a wall of hands poking through small doors. The disembodied hands begin pulling at the pantyhose, successfully ripping holes through which the sand pours out.

The rhythm and timbre of the show grow more intense, verging on chaotic. Dancers chase each other through the crowd shouting into megaphones; an edge of violence begins widening until the atmosphere shatters. Some of the performers convince most of the audience to sit down in front of several plexiglass display boxes where other dancers put on a little show. At this point all pretense of freedom for the spectators to see the performance through their own choices evaporates. They can be manipulated as easily as a TV-addicted kids.

Unfortunately, “Insideout” never regains its driving pace, and it drifts on far too long before it’s over. I am feeling disappointed that there is only the illusion of interaction between the performers and audience; there is no real participation by the spectators. What does it all mean? Yes, it is entertaining and many vignettes are intriguing, but what is the point of it all? A metaphor for life? If so, why go to all the trouble of such an elaborate performance?

Almost at the other end of the stylistic spectrum, and clear across town in the former East Berlin at Dock 11, I had seen a premiere from Tomi Paasonen, the former LINES dancer, the night before. I have watched Paasonen’s development since 1998 when, after dancing with Alonzo King’s company, he founded Kunst-Stoff with Yannis Adoniou in San Francisco. While he used to be far more theatrically “over the top,” he has begun exploring more internal and intimate themes concerning memory, repetition/difference, self and identity, and he has stripped down both his aesthetics and choreography without any loss of impact. The emphasis is simply put on other elements or aspects of the work and the result is a crystalline brilliance.

The difference between the two choreographers’ work I saw here is akin to the difference between Henry Fielding and Emily Dickinson. Waltz, like Fielding, takes on life with all its dimensions and layers, as if a caterer had laid out a smorgasbord of food from every ethnic street vendor in the world, allowing one to sample a limitless array of concoctions. Paasonen, like Dickinson, distills facets of that same life down to pure essence, then concentrates and purifies the liquor into a potent elixir that frees the imagination to muse upon the meanings that were previously elusive, but have now been brought into clearer focus. To partake of one or the other is only a matter of personal taste. Ultimately, I feel that with Waltz, in this particular piece, art imitates life a bit too much. I don’t experience enough of her own individual point of view. I value Paasonen’s artistic process, because his ability to shape his work into new forms leads us along uncharted paths. He opens up our eyes to see his unique perspective, to hear his voice. While with some choreographers the journey is through all too well-known territory, Paasonen allows us to explore his country with unjaded senses. 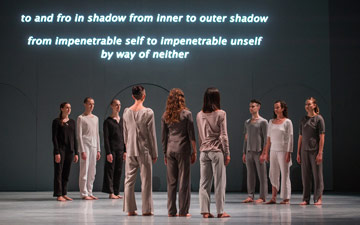 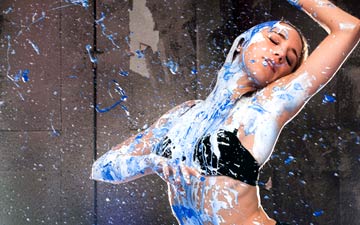