Carlos Acosta celebrated his 40th birthday last month and this show, the latest in a long line of his summer seasons at the Coliseum is a series of belated presents for devoted fans and newcomers alike, although there were surely a few amongst the latter who were unable to appreciate the true beauty of these gifts (more of which later). Acosta marked his arrival at this milestone of maturity with thoughtful and unusual content, slickly presented and delivered in an outstanding series of performances. End-of-the-pier shows may have died from coast to coast, but here in London Acosta is celebrating the summer (not to mention a big birthday) with easily his best show to date.

This diverse selection of 17 works (including musical interludes) is a gala in all but name and this one could have been sub-titled “Gems of The Royal Ballet” for all nine dancers hail from that company, the cosmopolitan nature of which is denoted by said cast coming from seven different homelands (three from the USA); and virtually all of the dance was extracted from The Royal Ballet’s repertory. But, unlike any gala I have seen before, there were no nineteenth-century classical pas de deux: Acosta’s emphasis being avowedly on the last century, selecting extracts from no less than five ballets by Kenneth MacMillan amongst works by George Balanchine, Frederick Ashton, Mikhail Fokine and Agrippina Vaganova. Royal Ballet artistic associate, Christopher Wheeldon, has the honour of being the only living choreographer included in the programme.

The capsules of MacMillan’s output ranged from the ubiquitous gala fare in Manon’s bedroom pas de deux to the double dose of death in the final danced scene from Mayerling. Leanne Benjamin has always been a consummate interpreter of the MacMillan repertoire and her retirement from The Royal Ballet ends the era of dancers who took their instructions direct from the choreographer himself. I was sad at having to miss her farewell performance (as Mary Vetsara) at The Royal Opera House, last month, and so this unique opportunity to see her once more (with Acosta as Prince Rudolf) in that most powerful final scene was an unexpected bonus.

The dramatic tension in the free-flowing, controlled abandon of their duet was delivered with passion that seemed implausible given the standing start. It was, however, an illusion quickly shattered by the inane laughter of a man sitting nearby who had either a bizarre sense of humour or no idea that he was guffawing at a scene that represented true events exposing the depth of human despair and leading to the imminent loss of two lives. Inexplicably, the laughter spread although thankfully confined to a small part of the same row. If the fourth wall wasn’t completely shattered by this misplaced hilarity then the shrill mobile ‘phone ringing arriving at the most intimate of moments truly finished the job. And if the audience couldn’t sully the moment on their own then the badly-placed screen, covering the bed on which Vetsara is shot by Rudolf, managed to ruin the dramatic conclusion. A large hinged gap allowed the unusual sight of the corpse rearranging its position on the bed several times over, which is not an aspect of Mayerling that I have previously experienced nor one I hope to see again. The chance to see Benjamin just once more made this a unique opportunity but there is a very good reason why scenes from Mayerling do not appear in galas, taken out of their proper context and without the necessary quality control. I would go as far as to say that Lady MacMillan should not allow it.

There was a less troubling guilty pleasure with the two extraordinary excerpts from Requiem, which again brought forth strong emotional performances from both Acosta and Benjamin, and in the duet between unknown soldier and the angel in mourning from Gloria (MacMillan’s elegiac tribute to young lives cut short in the First World War), which was danced evocatively by Nehemiah Kish and Melissa Hamilton. Although the applause in between the Requiem sections didn’t seem right (MacMillan requested that there be no applause during the performance) the excision of these beautiful sequences from the rest of the haunting ballets to which they rightfully belong in uncut, holistic, authenticity was not as grating as in the Mayerling case. That these extracts stood well on their own was partly to do with the expert performances of excellent dancers but also the poignant, atmospheric singing of the Pegasus Choir situated on either side of the auditorium.

Acosta gave an extra special present to his own adoring fans. Appearing in seven of the pieces, some separated by only a few minutes for a quick change, he looked in superb physical condition, accentuated by torso-revealing outfits in several numbers, three of which were duets shared with Marianela Nuñez, that celestial Venus in pointe shoes. They gave an assured, immaculate rendition of the central pas de deux from Apollo, a vibrant, ebullient romp through Vaganova’s Diana and Actaeon (another frequent gala party piece, especially loved by Cuban dancers) and in the irresistible schmaltz of the duet for Zobeide and the Golden Slave from Schèhèrezade. It was already stifling in the Coliseum but this pair of scorching bodies and their tempestuous desires raised the temperature to roasting point.

This Classical Selection had opened with a passionate farewell in the duet between Masha (Nuñez) and Vershinin (Acosta) from MacMillan’s Winter Dreams, a ballet that Acosta has only performed once but clearly wanted to reprise. This led into an interesting performance of Fokine’s The Dying Swan by Melissa Hamilton, the newly-promoted first soloist at the Royal Ballet. Hamilton meets the pure Russian aesthetic of what a white swan should be and she gave a thoughtful, unusual interpretation of the two-minute dance made famous by the great prima ballerinas of the past, notably Anna Pavlova and Maya Plisetskaya. I loved her fragility, the small improvisations made to her arched curves and poses and the slightly idiosyncratic placement of her legs as the swan comes to rest on the ground. Fokine advised dancers to accentuate either the drama or the poetry of the work according to their ability. Hamilton managed to emphasise both qualities.

The Royal Ballet Sinfonia did a great job throughout the varied programme under the direction of Paul Murphy, and Robert Clark played Tchaikovsky’s piano compositions beautifully to both open and close the show, as well as providing haunting accompaniment to Winter Dreams (again, Tchaikovsky) and – with James Porter on Cello – for The Dying Swan. There are often long gaps and pauses in any programme of divertissements such as this but credit to Acosta’s stage management team because it ran seamlessly throughout, often with one piece segueing into another without an obvious pause.

Ricardo Cervera reprised his regular role as Rudolf’s driver, Bratfisch, in Mayerling and also partnered Yuhui Choe in the beautiful, stately pas de deux from Rhapsody, Ashton’s 80th birthday present to the Queen Mother in 1980. I also enjoyed the jazzy brashness of the Rubies duet from Jewels which saw Cervera return to partner Meaghan Grace Hinkis. I have missed the extra special quality that former Royal Ballet Principal Alexandra Ansanelli brought to this role which she danced as much with her face as her body. Hinkis has an uncanny similarity to Ansanelli’s expressiveness and I loved her audacious attack and verve.

Benjamin and Kish rattled through the Manon bedroom duet albeit with a few moments where the intricate, sweeping movement didn’t flow quite so seamlessly. Hamilton returned to have her extraordinary limbs bent every which way by Eric Underwood in the adagio central pas de deux from Wheeldon’s Tryst, which was the penultimate dance number. In everything that she does we can see that Hamilton is the most likely next big star of British ballet (or to be more accurate British and Northern Irish ballet).

Acosta brought the show to a close by reprising the solo, entitled Memoria, made for him by Miguel Altunaga for the iteration of this Coliseum summer season back in 2009. Once more wearing not a lot, Acosta gave a coruscating solo performance that included memorable b-boy spins. There has been a lot of talk recently in the national press about the young kids on the ballet block, contrasting the virtuoso talents of Sergei Polunin, Ivan Vasilev and Vadim Muntagirov. This excellent programme showed that Acosta is not only growing as an impresario and director but it also reasserted his Alpha Male, top dog status. 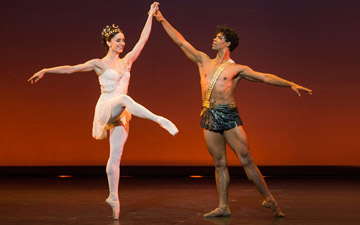 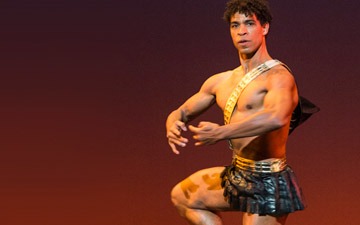 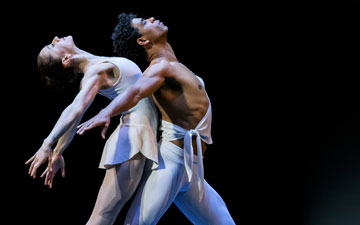