Israeli choreographer Hofesh Shechter arrived in London a decade ago to play drums in a rock band. That particular aspiration didn’t work out for him; instead, the young dancemaker lit up the 2004 Place Prize finals, launching a career that saw him propelled from the small-scale circuit to the main house at Sadler’s within months. Shechter’s love of rock music in general, and of drumming in particular, is an inspiration writ large on the face of his 2010 full-length work, Political Mother, revived in 2011 as an expanded “choreographer’s cut” and now closing this year’s Sampled festival.

The Sampled setting – with the stalls seats removed so that the front half of the audience is standing, like a rock concert audience in a mosh pit – was first devised for the 2011 revival and suits the work perfectly. The atmosphere at Sadler’s Wells is electric as the curtain goes up (late, I privately suspect to allow somebody backstage to check  out the Wimbledon quarter-final results). What follows is a series of intriguing images and a wall of noise so loud at points that the venue has to carry a decibel warning.

We open with a single figure, clad in the style of a Japanese samurai, committing bloody suicide by forcing a sword through his own body.  A string octet (large ensembles are a recurring theme of the work) plays a stirring, mournful Hebraic folk melody, which is then supplemented by the metallic thrash of four rock guitarists and no fewer than seven drums. This combination summarises the whole work: elements that are a little bit folky, combined with the heft and physicality of raw, Northern European hard rock.

Shechter’s physical language draws heavily on Israeli folk dance, more so in this piece than in previous stage outings. There are repeated shapes and motifs: a kind of shuffling hop-step with the knee bent high and the shoulders hunched low, arms raised wide in supplication, hands twirling overhead. These repeating shapes are then made to read, through a series of evolving costume and lighting choices, in a variety of ways. The hands overhead are shown in primary-coloured unison sections to signal community and hope; in dull grey prison fatigues they look more like despair and anguish; frozen next to a man pointing a shotgun, they are a clear gesture of surrender.

The step-hops likewise sometimes look joyful and exuberant and at other times bound and weary. Hands open to the heavens, or towards the guttural singer rocking a microphone on the upper deck of the stage; circles, squares and travelling lines form and dissolve on stage. The sixteen dancers of Shechter’s company must have the stamina of Olympic athletes; 75 minutes of relentless skipping would take it out of anyone, but there’s no sign of fatigue on the cast by the end of the piece as they gamely retrograde the entire performance like a video on rewind. That moment, by the way, is worth the price of admission alone.

Political Mother revels in a very particular kind of heavy energy, and there’s an excitement to the work borne not only of its pulsing soundtrack but of its specific physicality, exhilarating in its rough-hewn rawness. Shechter is clearly pushing for a relentless aesthetic, with his powerful soundtrack, sudden changes of scene and replicated gestures. If there’s one criticism to be levelled at the work, it’s that this unrelenting approach can eventually start to weigh a bit heavy on the audience; at 30 minutes in length, this might have been quite the most exciting thing on stage this year. At 75 minutes, the power of the movement starts to wane; there’s plenty of sound and fury on the stage, but the signification blurs. 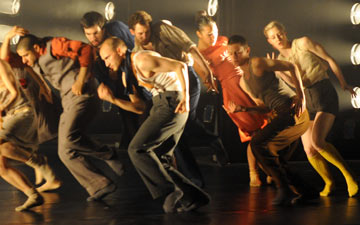