Hofesh Shechter created Political Mother in 2010 as a rebuke to totalitarianism and oppressive propaganda. The Israeli-born, UK-based choreographer has since reworked the production, his first full-length work, to include more dancers, but its form remains the same: a 70-minute rock gig and dance show in one, with on-stage electric guitarists and drummers shredding alongside a band of thrashing dancers.

The high-octane work is an assault to the senses from the outset, with ear-splitting chords, strobing lights and blasts of eye-watering fog – more of a middle finger than a shaking fist, really. Shechter piles on with a tidal wave of political imagery: a samurai stabbing himself in a ritual suicide, limp-wristed prisoners scrambling before an armed guard, a demagogue haranguing from a platform as an agitated crowd assembles below. This latter image, while somewhat over-egged, resounds powerfully in light of the acrid Trump-led rhetoric currently dominating the American political landscape.

The dancing occurs in staccato snippets sewn together with blackouts and blaring jolts of music, the 12 dancers dipping between different groupings and get-ups: trios and quartets clad in prison-style jumpsuits, whole-group phrases in folksy dresses and shirts. At times the troupe is militarised, moving in a tight, intimidating pack; other times, anarchy breaks out, and with it come ten different types of choreography at once.

Across this chaotic structure a theme of folk dance emerges, a language rooted in community and social purpose. There’s synchronised chugging, kicking, shuffling, scooting; wild, possessed spasms and quiet shivers – actions later dovetailed with a message spelled out in lights: “Where there is pressure there is folk dance.” The group revisits two gestures regularly: a still, crouching pose with open palms, and a speedy jig with raised, waving arms. These motions take on different connotations as they’re filtered through the work’s assorted imagery, by turns evoking optimism, distress, outrage and defeat. The easy transitions between these shifts in tone speak to Shechter’s theatrical instincts and knack for fluid, eloquent choreography.

Less well-judged is the work’s length. Political Mother could use some substantial excisions, particularly around the halfway mark, when it temporarily abandons its own well-crafted tension to pursue an incoherent, meandering string of small group phrases. No doubt the piece’s protracted length is part of its unremitting aesthetic, but the harsh music and dogged choreography accomplish this sense of gritty persistence sufficiently; the dragged-out duration disrupts the conceit more than it aids it.

Still, it’s an exceptional production in both concept and execution. I left the theatre savouring its vigour – the sudden, startling appearance of nightmarish figures, the unwavering stamina of the dancers in the face of an hour-plus of skipping and hurdling. The band makes for a particularly arresting sight: rocking atop a two-tier platform, the eight-strong brigade – which includes the choreographer himself, belting out ragged, distorted vocals in a rare cameo – calls to mind the camp, crazed antics of the Mad Max: Fury Road cavalry. It’s a testament to the company’s forceful stage presence, and Shechter’s canny structuring, that this sonic blitz never drowns out the dancing. 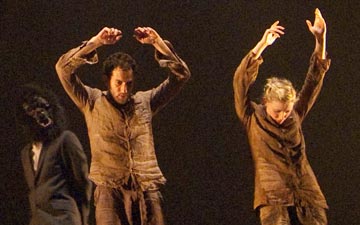