Blink and you’ll miss the complex narrative setup at the start of the show, a knotty tale of an evil ancient sorcerer whose soul falls into the wrong hands. Visually and narratively, The Five and the Prophecy of Prana owes much to pugnacious arcade games such as Tekken and anime classics like Dragon Ball Z; those who love manga beat-‘em-ups will find a lot to love here; those who don’t  will probably find the show borderline incomprehensible.

In the present day, five young lawbreakers (one of whom appears to be Little Britain’s Vicky Pollard) are standing trial for four unrelated offences. Why they should be jointly charged for their individual crimes is never made clear, but just as the frankly partisan-sounding judge is about to throw the book at The Five, sensai-with-a-drinking-problem, Wang Tang (Tommy Franzén), appears to offer the group salvation. There follows a series of training montages in which The Five become harder, better, stronger and faster before they can be entrusted with the task of defeating the wicked Soo-Lin (Michèle ‘Paleta’ Rhyner).

Franzén is in fine form as troubled hero Wang Tang, melding tutting and b-boying and kung-fu with the elegant fluidity of a tai-chi form. The show’s other revelation is Rhyner, an outstanding contortionist who seems to be able to turn her own torso inside-out; her Soo-Lin, a malevolent warrior who set her own family’s house on fire as a child and kills for power and pleasure, is the only character beside’s Franzén’s which is fully fleshed-out. The Five themselves, and the villains and gang members they must defeat, are all rather one-dimensional and drawn in crude gestures throughout. It could be argued that the show pays  homage to graphic forms and is therefore deliberately cartoonish, but to do so misses the potential for sophistication in adult graphic narrative.

There are problems with Sandy and Asante’s storytelling, too. Characters deliver lines of clunking pre-recorded dialogue by lip-synching onstage; again, this could be seen as simulating a dubbed Asian film, but all too often reads as accidental mistiming and misplaced goofiness. There’s more than one instance of unintentional comedy connected to duff “speaking” at moments of high drama. The structure of the narrative, too, flip-flops perplexingly between present action and past flashbacks which are not always clearly signalled. There’s a handy synopsis provided in the programme, which it might be wise to memorise before curtain-up.

A lot of love has clearly gone into this production; the cast are uniformly excellent and have evidently devoted hours in the studio to perfecting their slick unison in the group scenes, and fusing kung-fu styles into their more usual urban dance vocabularies. Sandy and Asante’s genuine love for the art forms they pay homage to is likewise not in doubt, and manga artist Akio Tanaka’s designs add a beautiful extra dimension to the production. Had the same effort and care been taken over the narrative as clearly went into the movement material then The Five and the Prophecy of Prana could really have become a milestone in hip-hop theatre; as it stands, it leaves some crucial elements lost in translation. 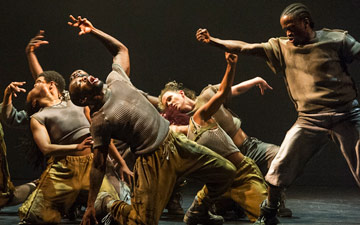