Scottish Ballet first performed Christopher Hampson’s Rite of Spring (created for Atlanta Ballet in 2010) during this year’s Edinburgh Festival on the large Festival Theatre stage. [DanceTabs review] I caught up with its third performance in Glasgow’s smaller Theatre Royal before the company set off on tour of the southern United States with A Streetcar Named Desire.

Saturday night’s Rite cast were making their debuts, as were many of the performers in Kenneth MacMillan’s Élite Syncopations, the second part of the Glasgow programme. An imaginatively contrasting double-bill, it pulled in audiences and left them buzzing. Scottish Ballet’s orchestra let rip in Stravinsky’s Sacre du printemps, a hundred years since its premiere, then whittled down to 13 performers as Scott Joplin’s Ragtime band.

Hampson credits his cast of just three for Rite of Spring as two brothers – Victor Zarallo as the older, Jamiel Lawrence as the younger one – and a woman called Faith (Constance Devernay). Saturday’s two men, bare-chested and wearing long black skirts at the start, are not much different in height, so it took a brief while for Zarallo to establish his dominance. The brothers spar in sibling rivalry within a white set of curving walls, rather like a skateboard arena, up which bodies can be slammed.

There’s a key moment early on when both kneel and bow down, as if in obeisance to some greater force. As the woman enters over the rear ramp, dressed in a white tunic, her name evidently bears significance. At first, to plangent music for the basson, she treats both brothers equally before driving them literally up the wall. On pointe, she is delicate and athletic, her legs and feet like weapons. The older brother claims her, to the rage and despair of the younger one. Lawrence resembles a bull calf, shoulders raised, shorn head poked forward, more ungainly than elegant Zarallo.

Bewildered and bereft, the young brother is alone at the start of the second half. The music, originally intended for female adolescents dreading the sacrifice to come, is mournful, ominous. Big brother returns in combat uniform, an inquisitor prepared to torture for his beliefs. The woman reappears in black. She represents the faith that divides families, tribes, nations; she is a femme fatale, La Mort who drives men to the end of their tether.

Video trailer for The Rite of Spring at the Edinburgh Festival.

Big brother, having hooded and beaten up his infidel sibling, turns his back on him. Goaded by the woman, young brother hurls himself up the ramps of the set, flailing his arms as he curses her, his brother, the world, as the orchestra goes berserk. In Lawrence’s interpretation, he’s angry at the unfairness of the cruelty inflicted on him, betrayed by his love for his brother and his desire for the woman. Devernay, impassive, stalks along the top of the walls like the Roland Petit incarnation of death on the rooftops of Paris. As her victim collapses at the end of his protracted battering, she vanishes – a treacherous fantasy.

Hampson has aimed at recreating something of the shock of the original pagan sacrifice by reminding us of present-day brutality in the guise of religious or political extremism. The combination of Cain and Abel rivalry and Abu Ghraib torture of prisoners overstretches ballet’s ability to communicate clearly. It’s too tempting to see the brothers at war over a woman, a pure love-object in white, lethal temptress in black. But the triangular rivalry remains gripping throughout the various phases of the score, played for this version with more ferocity than subtlety. The levels of violence are indeed shocking.

After the interval, onstage music is mufled by the theatre’s red velvet curtain. When it lifts away, gaily bedecked band members are watching the gyrations of dancers in Ian Spurling’s decorated lycra outfits. Rarely are dancers scrutinised by so many spectators on stage as well as in the auditorium. Pianist-conductor Brian Prentice bounds between two keyboards as he keeps an eye on what the performers, players and sitters-out are up to.

Élite Syncopations works best with either a young, enthusiastic cast or a worldly-wise one. Scottish Ballet’s dancers belong in the first category, enjoying their shiny new roles, taught to them by Julie Lincoln (ex-Royal Ballet). She’s enabled them to be themselves, rather than imposing visions of past performers they’d never seen – Wayne Sleep, Monica Mason, Jennifer Penney. The choreography is a reminder, though, of an era in the early 1970s when the Royal Ballet was accustomed to fleet footwork. The syncopated rags and witty swivels demand spot-on timing.

I  loved Andrew Peasgood and Daniela Oddi, breathless with fun in The Golden Hours, and Brenda Lee Grech vamping Christopher Harrison in the Bethena Waltz pas de deux. Constant Vigier had to make himself very small as the nerd in glasses, pressed up against tall Marge Hendrick’s midriff for The Alaskan Rag. Quenby Hersh mastered the sultriness of the Calliope Rag and Nicholas Shoesmith gallantly took on the acrobatics  of the Friday Night solo. A happy audience doted on them all. 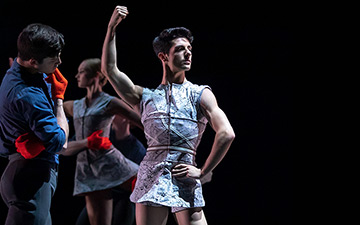