Across the piece Wayne McGregor is probably the most sought after and influential choreographer in the world right now. He comfortably straddles ballet and contemporary dance and many major companies from San Francisco to New York to Paris to Melbourne have his works in their repertoire, as does our own Royal Ballet where he is Resident Choreographer. But Random Dance, going now for 21 years, is his company and the ones on the cutting edge of his scientific approach to movement – they get to wear the 3D goggles and interact with software-driven choreographic entities in the studio. A new premiere for Random is a big deal and accompanying this one is an exhibition at the Welcome Collection documenting his scientific approach and a seminar by some of his research collaborators was also recently held at Sadlers Wells and Paul Arrowsmith reported on both for us.

McGregor always comes over as fearsomely bright, and getting a handle on what Atomos is supposed to be about is not easy. The programme notes are headed “What is a body” and written by a Professor of social anthropology (among other things). If you are thinking of a science populariser you’d be very wrong. I read the words – all English for sure – but they don’t say much to me as an ordinary Joe or seem to relate to the movement I saw on stage. While it’s often nice to know what the impetus to creation was, and it certainly can add to an entertaining night, lack of programme clarity doesn’t mean the piece doesn’t work of course.

So what of the movement in Atomos? Well all that work with ballet companies, as well as ‘Becoming’, the artificially-intelligent, life-size digital dancer, has rather softened the style – the amazing sharp and snappy extremes we saw earlier, so often likened to insects, is more naturalistic – there is less of the the sharp intake of breath and feeling “Can a human body really do that?”. There remains great invention here and so much of the look and movement is different from what we normally see. Despite the talk of artificial intelligence and computers there is great harmony in so much of it – these are people, not objects. But they are not people who interact and have feelings, I think – duets are cold, sculptural affairs, if striking for a while.

McGregor’s choice of collaborators helps, with Lucy Carter’s atmospheric lighting guiding us around the often smokey stage and Ravi Deepres defining a variable stage area with squared projections of what looks like Pantone graduated palettes and film sequences. The costume designs of Studio XO also seems to take the tight top and pants look and add colourful design flourishes, though sadly some of these only become fully apparent when the house lights go up at the end (they also look better in Dave Morgan’s pictures). The moody music from A Winged Victory For The Sullen, played live, was also harmonious, often in a dirge-like way, based around strings as it was. But it occasionally changed gear and at one point was perplexingly loud for no apparent reason. Perhaps a software orgasm had been called for?

One of the oddities of the show was being given 3D glasses to wear, if I wasn’t sure when I was supposed to wear them. All became apparent when 7 large TV screens descended from the heavens and showed 3D video of dancers moving in slow-mo and what looked to be a work made of ants developing into a bustling software-driven earth. My take, rather uncharitable perhaps, was that this section gave the 10 Random dancers a much-needed opportunity for a breather. But the 3D itself didn’t really add to, and rather detracted from, the evening if anything.

Overall I saw some interesting and different movement, at its best when the 10 dancers were each doing their own thing across the stage – he can make dancers noodling look utterly gorgeous. Duets could be beautiful, but didn’t really develop and choreographically the event seemed rather the same – the different sections being more defined by the projections and lighting. Sans 3D and distilled down there is a compelling 40-minute work in here (part of a double bill), but at 70 minutes Atomos felt too long. That, or perhaps I’m just not intelligent enough to keep up with the computers these days. 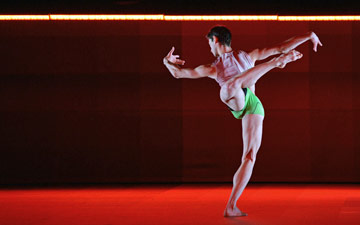