Wayne McGregor is popping up all over. The Royal Opera House reveals the making of Raven Girl in a foyer exhibition, until February 2014. Later this week his new show for Random Dance, Atomos, is premiered at Sadler’s Wells before going on international tour and comes with more than the usual assembly that frames (obscures?) a McGregor production – an exhibition and a seminar.

Claiming to reveal McGregor’s methodology, Thinking with the Body is an exhibition at the Wellcome Collection in London. Its welcome is anything but. Step into the lift to ascend to the fifth floor – the venue for this exploration of McGregor’s choreographic brain – and a notice denies you access.

Thinking with the Body – an introduction from David Bickerstaff on Vimeo.

Persevere and you will discover an exhibition that is genuinely provocative, multi-layered, visually and aurally – and as cerebrally demanding as any McGregor stage work. McGregorphile? You will be indulged. McGregorphobe? Your prejudices will be reinforced.

The visual timeline of the past 15 years or so, detailing McGregor’s choreographic and scientific journeying, is sufficiently rich to form an exhibition in its own right. As presented, it is a prime example of the vagaries of so much contemporary design.

Perversely reading from right to left, three narratives compete for attention against tri-coloured wavy bands. Visual images are too small to have impact. Explanatory text is lost in a confusion of point sizes, grey words on grey backgrounds, preventing the eye and brain from assimilating meaning. A constant irritant, videoed talking heads overlap, monologues where basic ideas disappear under heavy conceptualisation.

The subtitle of the exhibition is ‘Mind and movement,’ McGregor’s witty subversion of school music and movement exercises that are replicated in interactive exhibits. Visitors chose not to lie on the floor, their head encased in a box, apparently the conduit for heightened powers of visualisation – though not an original technique. This is the first stage in how McGregor – with the input of cognitive and social scientists, the stimulus for this exhibition – has formalised his choreographic process.

“Seeing things kinetically expressed makes me see things differently, move differently and invent differently,” claims McGregor. Donning 3D specs to view imagery produced using artificial intelligence and digital arts techniques, did not give me a kinetic trip. Nor was “seeing sound” persuasive. An empty black box of a room, low-ceilinged, with subdued fluorescent strip lighting intersected by industrial ducts and pipework was the void in which Ben Frost’s score for Far ruminated. Apparently such sensory cleansing is the necessary preliminary for McGregor’s choreographic imaginings.

Thinking with the Body is at the Wellcome Collection until 27 October, across the road from Euston station and well worth a detour. Yet calculatedly little of McGregor’s imagination is revealed. His brain may be dissected but we do not discover his heart.

Merchandising what does make him tick, the commercially canny McGregor has compressed 20 years’ experience into a teaching pack, Mind and Movement, a box of choreographic tools involving visual, acoustic and kinaesthetic exercises. Supported by the Paul Hamlyn Foundation, it is yours for £55.

A prototype interactive choreographic sketchpad, named Becoming, was demonstrated at the EChO seminar held in the Lilian Baylis studio last Thursday. Its developers, an anthropologist, a digital designer, a scientist and his colleague were gloriously opaque in explaining their work. Trisha Brown’s use of algorithms was acknowledged (though not her technique of filming choreography made on herself and taught) but the seminar did not take cognisance of other computer and choreographic brains that have exercised over the fusion of technology and human creativity for the past 40 years at least.

Left to their own devices, it was two dancers who were the most eloquent in words and movement. Simply said, Becoming is a “Choreographic Language Agent” that animates 3D drawings, existing as a virtual body on which choreographers can develop ever more extreme physical movements. When interacting with it one dancer explained it was impossible to predict what movements Becoming will generate as it has its own (artificial) intelligence.

Scary stuff, particularly for those who consider McGregor’s physical extremities are already a choreographic cul-de-sac. Progress with Becoming is not fast enough for McGregor but we were told it is helping develop the range and responses of the dancers who have worked with the prototype, generating “a more diverse creativity,” one said.

The fascination for McGregor is clear. He did not pop into the seminar – getting Atomos onstage required his personal intervention. Becoming cannot do that. Yet. 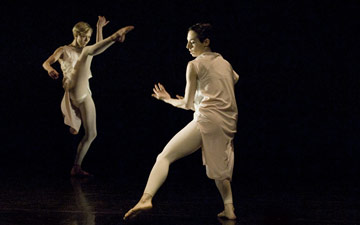