I first became aware of Isamu Noguchi through his paper and bamboo lampshades (a staple of every student bedsit), then through his sculptures for Martha Graham’s dance company when it visited London. They collaborated for over fifty years, from 1934 until his death in 1988. Though the Barbican exhibition of his life’s work is a visual delight, it doesn’t do full justice to his theatrical creations for dance companies, including Merce Cunningham’s and New York City Ballet.

Noguchi was born in Los Angeles in 1904 of an American mother and Japanese father. He studied sculpture under Brancusi and later branched out into architecture, ceramics, lighting, furniture and theatrical design. In the 1920s and 1930s, he created costumes and sets for the dancer-choreographers Ruth Page and Martha Graham. His half-sister, Ailes Gilmour, danced with Graham. Then came World War II, during which Noguchi voluntarily entered an internment camp for Japanese Americans in Arizona. After the war was over, he travelled widely in the Far East, returning frequently to Japan and America. He contributed to 20 of Graham’s dance works before his death, aged 84, in New York, where there is a museum of his work.

A wide range of his sculptures is on display on two levels of the Barbican’s third floor gallery. The upper floor is divided into separate themes, among them Gravity, The expanding universe, Political conscience and Sculpting space; here his very first design for Graham is shown in a film of Frontier (1935). The simple set consists of two ropes suspended from the top corners of the stage with a fence at the centre. Graham choreographed the solo for herself as a young pioneer woman contemplating the vast horizon of the prairies and her own future. Frontier was the start of her series of American-themed dances, culminating in Appalachian Spring (1944) to Aaron Copland’s commissioned score. In the 1964 film of Frontier, Ethel Winter performs the solo to music by Louis Horst, Graham’s friend, mentor and musical director. Winter is joyous, kicking her heels beneath her prairie frock, planting her foot triumphantly on top of the gate, the ropes stretching away from her into the limitless distance.

By 1946, Graham had turned to Greek mythology and Judaeo-Christian legends to express her own experience. One section of the exhibition displays a re-creation of the ‘spider dress’ for Graham’s Cave of the Heart, her interpretation of the story of Medea, the sorceress consumed by jealousy who murdered her own children. Noguchi forged an extraordinary structure made of brass wires into which the Medea dancer, originally Graham, inserts herself towards the end of the dance. In movement, it shimmers, radiating like flames. Displayed on a bronze slab representing a serpent, it looks intimidatingly large, though it must be light enough for a slight dancer to bear. The Martha Graham Dance Company continues to perform her repertoire, including Cave of the Heart, along with new work by other choreographers.

In the exhibition section called Skin and bones, Noguchi’s designs for Graham’s Herodiade (1944) are to be found among other interlocking sculptures. Three skeletal wooden structures stand together, the tallest of them the most intricately wrought. A caption in the guide booklet identifies them as clothes rack, chair and mirror. The context for them is an old black-and-white film tucked away in a corridor. Lent by the Martha Graham Centre, the battered film is archival footage of Graham and May O’Donnell performing some of Herodiade; there is no soundtrack of the music by Paul Hindemith. It’s hard to watch without information about the work, though the dancers’ flaring skirts reveal that they, too, are sculptural elements in performance.

In her autobiography, Graham wrote that Herodiade marked a crisis in her life, without revealing what it was. The original title was Mirror Before Me, until Hindemith insisted the work be called Hérodiade after the poem of that name by Stéphane Mallarmé about a princess and her older nursemaid. The name Herodias, wife of Herod, is often conflated with that of her daughter, Salomé. Graham’s dance is a woman’s ritual preparation to confront her destiny, assisted by her attendant (O’Donnell).

Graham confronts the tallest of the three sculptures, which, according to her autobiography, represents ‘her own bleached bones placed before the black mirror of her fate’. She wears a dark dress with a very full skirt, as does her attendant. (The costumes were designed by Edythe Gilfond.) After dances for both women, O’Donnell helps Graham to remove the dark dress, revealing a white one beneath it. Her true self is now exposed, until O’Donnell fetches a cloak from the X-shaped sculpture to enshroud Graham with a reminder of her mortality. In her autobiography, Graham noted the significance of a small object, a bird, that Noguchi had placed within the tall skeletal structure. ‘I sensed it was Herodias’s heart, vibrating and exposed to life. It was mine too.’

Graham discussed her empathy with Noguchi in her book, emphasising that ‘I never told Isamu what to do or how to do it . . . he took me to images that I had never contemplated before and gave new life to works I had created.’ Although they usually collaborated harmoniously, on one occasion, during a dress rehearsal for Errand into the Maze in 1947, she slapped him across the face. She noted drily: ‘I suspect I was going through my violent period.’

The ground floor of the exhibition, a voluminous space, juxtaposes an array of Noguchi’s creations in metal, wood, clay and paper, illuminated by his Akari lampshades. On the opening Saturday 16 October, Yolande Yorke-Edgell, who had studied at the Martha Graham School of Contemporary Dance, performed Lamentation, Graham’s 1930 solo: she alternated during the afternoon with Freya Jeffs, a member of Yorke Dance Project. The brief performances (the solo lasts only four minutes) took place by a piano at the end of the gallery. The pianist was Andrew Garrido, playing Zoltan Kodàly’s Piece for Piano op 3 no 2.

Although Noguchi was not involved with Lamentation, its simplicity and the organic shapes formed by the dancer tally with his aesthetic. Seated on a bench, encased in a tube of purple jersey, the performer stretches the fabric in waves of grief, her internal struggle with suffering made visible. Graham’s original programme note called the solo a dance of sorrows, ‘not the sorrow of a specific person, time or place but the personification of grief itself.’ The images she devised 81 years ago strikingly resemble news coverage of shrouded Muslim women bewailing the deaths of loved ones in ongoing wars and uprisings. More ephemeral than Noguchi’s sculptures, Graham’s Lamentation lives on in live performance.

Yorke-Edgell will reprise the solo during her company’s season in the Linbury Theatre, 12-14 November 2021. 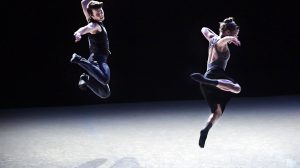