Hurricane Sandy was not kind to the Martha Graham Dance Company. The violent storm sent water gushing down into the company’s storage areas at Westbeth, just steps from the Hudson River. Priceless costumes and set pieces, dating back to the forties, sat in putrid water for a week before they could be removed to Yonkers to dry out and be evaluated for restoration. Ironically, the company had just moved to its new digs – the former headquarters of the Merce Cunningham Dance Company – a few months earlier. Since October conservators and volunteers have been hard at work washing, scrubbing, re-painting. Not everything will be saved, of course, and restoration is expensive. On Feb. 26 the company held a gala (“Fall and Recovery”) to raise funds for the massive, expensive restoration project to come.

Even more than with other choreographers, the costumes and sets are essential elements of Graham’s dance imagination. Think of Martha’s stretchy sack-dress in Lamentation, or the prickly metal tree-dress by Noguchi in Cave of the Heart. They are extensions of the dancers’ bodies, and of Graham’s Jungian world-view. Even more, they color our perception of the movement. A contraction of the pelvis looks quite different in a leotard than it does in a floor-length cape-dress. In the first instance, it is a movement; in the second, it is a state of mind. If the sets look dated, it is because Graham’s concept of art is rooted in another time. A pared-down Errand into the Maze performed last week did not feel more contemporary, but rather like a study for Errand, intriguing but incomplete.

The central importance of costumes was particularly evident in the company’s reconstruction of a solo from Imperial Gesture (1935), performed at the gala. A dancer (Blakeley White-McGuire) stalks about the stage in a huge, two-layered cloak-dress with Kimono-like details, designed by Graham. The interior is black, the exterior rusty orange. The obi-like rear panel gives the dancer the hieratic look of an empress. As she spins, the outer layer of the dress billows like a heavy cloud. The dancer becomes twice as large – Graham was tiny. Each kick of the leg becomes a monumental, three-dimensional event. The dancer manipulates the dress’s layers, choosing which color to reveal, creating contrasts of tone: angry, frenzied, threatening, morose. The dress becomes a hood, an armature, and, at the end, a shroud. It is as important as the dancer inside.

The reconstruction of Imperial Gesture was undertaken by Kim Jones, a former Graham dancer now teaching at UNC Charlotte. Jones used photos of the original (by Barbara Morgan) and interviewed older dancers familiar with Graham’s style from the thirties and forties. She also had help from a dramaturge (Jeanmarie Higgins). Even the music has been lost. This new version of Imperial Gesture is certainly not the same as the one performed in 1935. Choreography is movement, after all, and movement cannot be captured in photographs. Imagine recreating Swan Lake from photographs. What Jones has re-created is a mood, perhaps an intention and a look. But unsurprisingly the reconstruction lacks specificity in the steps. The result looks like a sketch for Chronicle, Graham’s anti-Fascist manifesto of 1936.

Galas are a mish-mash and this one was no different. It was nice to see the New York dance community pitch in to support a friend in need. Irina Dvorovenko, who will be retiring from American Ballet Theatre in the spring, danced The Dying Swan (of all things!) with liquid arms and an extra flourish (“I die!”) at the end, accompanied by a beefed-up recording of Saint-Saëns. (Or were the extra bass and wind sounds an auditory illusion created by the Joyce’s inadequate sound system?) David Neumann danced a sly solo in which he did tricks with a rakishly-tilted fedora and cavorted skillfully in a tight square of light. Neumanns’ body is exceptionally articulate, his footwork delicate and smooth. He’s a great showman. The evening had begun with a raucous tap improvisation by the extroverted Michelle Dorrance, in which she riffed on the electronically-captured echo of her own tapping feet. Next came Wendy Whelan (of New York City Ballet), performing in what has by now become her signature piece, the pas de deux from Christopher Wheeldon’s After the Rain. Having watched her perform this pas de deux dozens of time over the years, I am still struck by its bare-boned quality and the direct, unapologetically simple means by which it reveals Whelan’s honesty as a ballerina and, one feels, as a woman. With just a few shapes and images, Wheeldon tells us all we need to know about a situation of intimacy, near-nakedness, and perhaps even a kind of disappointment. “Is that all love is?” Whelan’s pale body seems to ask. This was the first time I had seen Whelan perform Wheeldon’s duet with the Danish-born Ask la Cour, also of New York City Ballet. His attentiveness and slightly dreamy demeanor counters her angular objectivity with a certain note of romance. One senses that the man is still in love, while the woman has perhaps moved on.

The Graham dancers performed too, not only in Imperial Gesture but also in various excerpts of new and old works. The young Lloyd Mayor reprised the role of Achilles in a solo from Richard Move’s The Show (Achilles Heels). Katherine Crockett was the tormented Helen, writhing on the floor in contractions and swinging her long legs in Move’s somewhat emphatic appropriation of Graham’s style. Miki Orihara and Abdiel Jacobsen performed “Moon,” an excerpt from Canticle for Innocent Comedians. The tender duet is structured like a conversation, echoing the phrases of Cameron McCosh’s lilting piano score, as “recreated” by Pat Daugherty. Orihara and Jacobsen are two of the company’s most internalized, musically-responsive dancers. It’s not often one encounters such subtlety in the Graham repertory. Based on this fragment, I’d love to see the rest of the work.

There were two new pieces to show off as well. First, a melodramatic male quintet from Nacho Duato’s work-in-progress, Rust. (But when is Duato not melodramatic?) Tragic faces, lots of staggering about and crashing to the floor and dragging each other around and piled-on pathos, ponderously layered onto Arvo Part’s sonorous evocation of Gregorian chant, De Profundis. This lugubrious activity is illuminated from above in pools of bright light surrounded by inky darkness, the better to mold each pose in sculptural, sensationalized chiaroscuro. One can only imagine what the rest of the piece will look like. In addition, Luca Veggetti’s From the Grammar of Dreams had its première. As Eilber pointed out, it was supremely generous of Veggetti to donate a new work – yes, create a dance for free – after disaster struck. And the company needs new blood. But there’s not much blood in Veggetti’s exquisitely monochrome creation, despite the lively score (by Kaija Saariaho) for two female voices grunting, trilling, and whispering disconnected words. The dancers move like ninja-like chess pieces, silently sliding (on socks) and lunging in straight trajectories across the grid-like stage, then revolving, crouching, swinging into place, waiting for the next move. Veggetti dresses the five women in loose, Isse Miyake-like black trousers. They wait, still as Zen masters, for their celestial instructions. The sections, of uneven length, are divided by blackouts; like a modular construction, the number of pieces seems arbitrary. The whole thing is handsome, but dull.

After this, what joy to see the closing work, an excerpt from Martha Graham’s Panorama, performed by a group of thirty high school students from across the city. With an extremely limited range of movements – a jabbing jump, marching, running with arms raised or held simply at the sides – Graham was able to create a compelling spectacle of joint action, of people power, at a time when Fascism was building in strength across Europe. She understood the power of a simple idea, expressed by many bodies at once. (In a way, it’s similar to the electrifying effect of flash mobs.) Groups travel across the stage, intercross, dissolve into lines, circles, wedges; the stage pulses with life. The kids seem to be having a ball, and so do we. 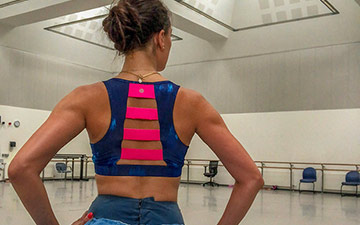