To preserve or to progress? And if the latter, how? These questions seem to come up increasingly often as companies grapple with the death of their founding choreographers, artists who created importantant schools of dance in their own image. Even masterpieces age – sometimes beyond rehabilitation. So we can often only just make out what is important about a work, what was radical fifty years ago, but simply cannot retrieve the emotions it produced at the time. This distancing is especially pernicious when the style is inseparable from the body and spirit of its creator, as in the case of Martha Graham. Though she has been gone twenty-two years, her shadow looms over the company’s performances like a towering presence; there might as well be a bust of her onstage with the dancers. Perhaps this is why, paradoxically, the Graham dancers often look more comfortable performing works by other choreographers, as they increasingly do.

The inclusion of new works – and of dances by her contemporaries – is part of the company’s strategy for survival in the post-Martha era, as formulated by its current director, Janet Eilber. The troupe has been through a lot: a lawsuit over ownership of Graham’s dances, money troubles, and some pretty serious damage to its sets and costumes during Hurricane Sandy, when water flooded the basement of its headquarters in the West Village.

And yet, year after year, it perseveres, touring, presenting New York seasons, reviving forgotten works, commissioning new pieces, even renting itself out to outside entities. As Eilber recently told Joan Acocella, “we’ll do shows with five dancers, or twenty dancers. We’ll come with sets or no sets.” Last year the dancers took part in stagings of The Bacchae and Prometheus Bound at the Greek amphitheatre in Siracusa, directed by Antonio Calenda. Eilber has also embraced an educational mission, inspired by the lecture-demonstration model: documentary-style film presentations interspersed with danced excerpts, short introductions to performances, thematically-organized programs. All this to keep Graham alive.

The results are mixed, but what else can she do? Not all the newly-commissioned pieces are good, and all too often the “contextualized” performances feel like history lessons. It’s worth noting that not every Graham piece is a masterwork. Take Phaedra, last performed in 2003 and revived for the current Joyce season. In 1962, when it was first performed, it caused scandal because of the overtly sexual treatment of its subject – the Greek queen’s forbidden lust for her stepson Hippolytus. Today it seems almost cartoonish in its illustration of female desire – it’s all about the groin – and even more, in its objectification of the male physique. Hippolytus, played on Feb. 20 by Maurizio Nardi, is pure beefcake, flexing his muscles and caressing his chest while clad in tiny briefs behind a screen that reveals first a thigh, then a leg, then another thigh. The other scantily-clad men, including Theseus (Phaedra’s husband), slap their legs and squat or stomp around like cavemen, showing off their ripped physiques. (Some of the guys look like they’ve spent the better part of their lives lifting weights.) The goddess Aphrodite, who plots Hippolytus’s demise as punishment for rebuffing her, celebrates by spreading her legs while hanging off of a multi-panel wall designed by Noguchi. Phaedra kills herself by stabbing herself repeatedly in the genitals.

And yet, one can just imagine how brave it must have looked in 1962, when John Martin called it “as savage a piece as she has ever given us.” In the movies of the time, such a frank depiction of raw sexual hunger would have been unthinkable. Phaedra is also a remarkable example of Graham’s talent for shaping narrative. We see Hippolytus both as he actually behaves – chastely – and as Phaedra describes him to her husband: a shameless seducer, flaunting his physique and forcing himself on her. (Still, Maurizio Nardi’s depiction of the naughty version of Hippolytus does seem a tad too gleeful.) Two goddesses – lascivious Aphrodite and virtuous Artemis – frame the action. Phaedra’s mother, Pasiphae – who famously cavorted with a bull – makes an appearance, carried aloft by four “Bull Dancers” and wiggling her hips suggestively. The fragments lock together nicely, like a well-built puzzle, aided by Noguchi’s essential set. (The set pieces were saved from the floodwaters and spruced up with a lick of paint.) But the characters and the story are blatant almost to the point of parody. Did they seem so in 1962? Or was the material so shocking that it didn’t matter? Furthermore, as in too many of Graham’s dances, the music (by Robert Starer) exists purely to support the action. It has no life of its own.

On the other hand the second work of the evening, the company première of Richard Move’s The Show (Achilles Heels), holds up well. Originally made in 2002 for Baryshnikov and the White Oak Dance Project, it is a post-modern deconstruction of certain aspects of the myth of Achilles. As a young dancer, Move performed both with Karole Armitage and as a go-go dancer in clubs; he knows about the objectification of the male body. Later, he made his name with a cabaret act in which he impersonated Martha Graham (surprisingly well). His fascination with the Martha myth then led him to create a series of dance-theatre re-enactments, right on the edge of parody. But The Show is not a parody, though it too draws on Move’s past experience, with elements of drag, decadent pop culture, and club dance. But really, it’s a late twentieth-century meditation on the kind of beefcake beauty Graham presented un-ironically in Phaedra. The heroic Achilles becomes the embodiment of the male figure as a gay icon, the “beautiful creature” described by the pop singer Debbie Harry in her purring vocal accompaniment (pre-recorded). Harry’s désabusé attitude sets the tone.

At the Joyce, Achilles is played by a very young-looking Lloyd Mayor, trained at the Rambert School and currently an apprentice. (It’s interesting that Move chose to work with a dancer with only limited Graham experience.) (An interview). Mayor performs the most challenging choreography with easy grace. Unlike previous interpreters (Baryshnikov, Rasta Thomas), he projects innocence, even as he strikes Adonis-like poses or struts around in silver heels. His duet with Patroclus (Abdiel Jacobsen) is filled with almost blushing tenderness. But at times – for example when he spins slowly beneath a spotlight in his final solo – he seems slightly uncomfortable in his role as object of worship (and self-worship). He could use just a little more of an edge.

In any case, the piece works suprisingly well. In several scenes, Move uses a game-show format to elicit bits of information about Achilles and the Trojan War. A corset-wearing hostess (Blakely White-McGuire as the Goddess Athena, lip-synching to Debbie Harry’s knowing voice) interrogates her only guest, Achilles (lip-synching to Baryshnikov’s voice). She asks him a barrage of questions about his family history, his past, his fate. In response to each correct answer – it’s his story, after all – a group of back-up dancers does hip-hop moves and the sound system plays the glockenspiel music from The Magic Flute. It’s all rather surreal. This is not the first time a contemporary choreographer has used the game-show device or amalgamated high and low culture; William Forsythe’s Impressing the Czar is just one glaring example. But still, it’s clear that Move knows his Illiad and uses it well. Introducing yet another register of heroic storytelling, he has the dancers lip-sync short passages from Hollywood classics like Helen of Troy (1956) and Fury of Achilles (1962). Wink, wink. This eclectic mash-up of narrative and dance styles is held together by Move’s intelligence, by his canny use of gay iconography, by his excellent writing and by Debbie Harry’s vocal charisma. The Show is as sly as Phaedra is forthright. Perhaps this is why the dancers look liberated, relaxed, sexy, empowered. For once, they are not reduced to making a case for Graham, good or bad. Janet Eilber may be on to something. Richard Move is exactly the kind of smart, contemporary choreographer the company needs in order to move forward.

The Joyce season continus through March 3, with two more programs to come. 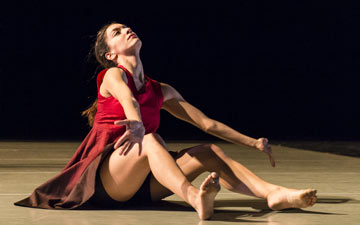