The Martha Graham Dance Company has been through a lot in the past 90 years, not least the death of its founder, in 1991, and the company’s own near-death at the beginning of this century, brought on by a lack of funds and disputes over the rights to the dances. Since 2005, under the direction of Janet Eilber, it has once again found its footing, reimagining itself as a repertory company while repackaging the works of Graham for a new generation. Ever enterprising, it has launched initiative after initiative: films, open rehearsals, themed programming, and even a collaboration with the Google Cultural Institute that puts archival material online.

So there’s much to celebrate as the company marks the ninetieth anniversary of Graham’s 1926 début at the Forty-Eighth Street Theatre. First of all, the company is still here. Secondly, the newest generation of dancers is looking particularly strong. Third, the dancers are finally performing to live musical accompaniment, provided by the Mannes Orchestra, under the baton of David Hayes. I caught two performances, the 90th anniversary gala on April 18 and an earlier mixed program on the 16th.

The gala was a well-put-together, briskly-paced affair, a sampler of Graham excerpts dating back to her very first recital, in 1926. A little bit of this and a little bit of that. Tangara, inspired by Greek terra-cotta figures of female dancers – there are several of them at the Metropolitan Museum of Art – takes us back to Graham’s apprenticeship with Denishawn, a company that specialized in the archaic and the exotic. A woman (Blakely White-McGuire), draped in lengths of white fabric and carrying a fan, moves slowly, gracefully, holding her arms out like moth’s wings, un-folding and refolding fabric and spinning slowly to a Satie Gnossienne (beautifully played by Julia Hamos).

More excerpts followed, including one from the still-striking Heretic (1929), with its wall of women in black stretchy dresses and kerchiefs, looming over a lone woman in white, hammering at her with their taut, flat bodies as she slowly crumples to the ground. Here we have a prime example of Graham’s genius with fabric and costuming. The stretchy dresses flatter the female figure, but also turn the dancers into abstractions, shadows, brush-strokes on the stage. This is even more true of Lamentation, the 1930 solo most closely identified with Graham. In that case the dress, a tube of stretchy fabric that conceals everything but the face, is the dance. PeiJu Chien-Pott, one of the most dramatic of the company’s younger crop of dancers, performed this “dance of sorrows” with stark, contained emotion.

Two short pieces were performed by a visiting artist, Aurélie Dupont, recently retired from the Paris Opéra Ballet. (And even more recently chosen to direct that French company after Benjamin Millepied’s departure.) She danced the “Simple Gifts” duet from Appalachian Spring with company-member Lloyd Mayor and “Lament,” a solo drawn from a late, not-so-great Graham work, Acts of Light. In the latter, which looks like an updated version of Lamentation, Dupont stretched and twisted and briefly interacted with several male dancers while wearing a sack-like white garment. But neither piece had much impact; Graham’s taut, sculptural style eluded her. Dupont was all beautiful lines in space, a ballerina through and through.

Before ending with two sections from Chronicle (1936) – a marvel of geometric patterns and scything energy – the company presented a single new work, by the young Swedish choreographer Pontus Lidberg. Woodland seemed to be about a lonely lost girl (Xin Ying) who watched, looking vulnerable and afraid in a frumpy skirt and top, as eight others flirted and intermingled around her. They formed cat’s cradles and pushed and leaned against each other, rolling and lifting or resting against each other momentarily. At times, they wore fox-like masks, and then removed them; perhaps they were meant to be forest animals. It wasn’t clear. Lidberg’s movement style is fluid and organic, filled with small details; nothing is exaggerated or emphatic, and there is a lot of stillness. But there’s little to hold it all together. The relation with the music, Irving Fine’s Notturno for Strings and Harp, is only tangential. So in the end the piece feels a little generic, a little drab.

Of late, a lot of the company’s energy has been devoted to new commissions. The April 16 performance included another première, by the Canadian choreographer Marie Chouinard. This one, entitled Inner Resources, was anything but drab. Set against a bright red backdrop, and accompanied by a loud, fast, electronic beat, eight women sashayed on, wearing blue button-down shirts over their heads (hiding their faces), arms held straight up, and began to walk on en pointe in their black sneakers. The head-coverings and funny walks made them look like gnomes; the pointe-work only added to the weirdness of the scene. They moved their arms silkily, in an approximation of voguing, then buckled to the ground. When they finally removed their shirts, it turned out they were wearing false whiskers underneath; one of them even had a little Van Dyck beard. They made funny faces, twisting their mouths and opening their eyes wide, and launched into contorted solos, walking on bent ankles or floppy legs. Inner Resources had moments of zany charm, but looked like a choreographic exercise, not a finished piece.

The program also included Rust, made for the company in 2013 by Nacho Duato. Here five men enacted rituals of torture and torment in a dark room. Men walked and struck each other, dragged their victims across the floor. They covered their heads with their shirts and knelt, in an image that brought to mind photos of prisoners at Abu Ghraib and Guantánamo. A shot rang out, and a body crumpled. Rust isn’t terribly subtle but it gets its point across.

These new works were performed alongside Chronicle (1936) and Cave of the Heart (1946). Cave of the Heart, Graham’s retelling of the Medea myth, was given a pallid performance, by the numbers; it came alive only in Medea’s final, shuddering solo, performed by PeiJu Chien-Pott. Finally, as she pulled the red ribbon of fate from her dress, and her eyes flashed with murderous rage, the piece’s power flickered into focus. Graham can’t be done halfway; it needs fire, and that fire is not always there these days.

Chronicle, a more abstract work, suffers less from the arrows of time. Once again, the costume – a voluminous black dress with a red layer underneath that billows and flashes – is the source of much of the drama. Blakely White-McGuire, one of the company’s senior dancers, has the fierceness to make it work.

But with each passing year it feels like the Graham pieces are becoming more of an afterthought, the least exciting items in each season. Much of the focus seems to be on the new. Perhaps, as the company approaches its 100th anniversary, it might begin to revive some seldom-seen Graham works, not as museum pieces but as living breathing works of dance theatre. It’s time to rediscover them and infuse them with a vitality that is steadily slipping away. 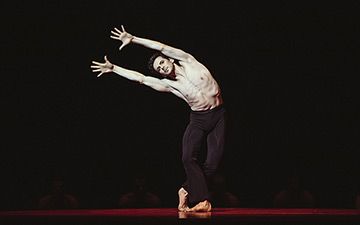