The second program of the Suzanne Farrell Ballet’s season at the Kennedy Center’s Eisenhower Theater offered a perfect Balanchine sampler, bringing together an assortment of ballets, full of unexpected juxtapositions, from very different periods of the choreographer’s long career.

The company premiere of Pas de Dix was dedicated to the memory of Maria Tallchief, who passed away last April. Tallchief originated the ballerina part in this ballet and it became one of the most memorable roles of her dancing career. “A great lady, a larger-than-life personage and staunch Balanchine disciple,” Farrell described her late friend in the notes to the program.

Sparkling and vivacious, Pas de Dix (1955) – a dance for ten – takes most of its music from Grand Pas Hongrois, from the third act of Alexander Glazunov’s Raymonda. In it, Balanchine expertly blends classical ballet style and folk dancing, creating a brilliant display for four couples and two principal dancers. The joyful and vigorous music accompanies a series of lively solos, duets, and ensembles.  It’s a ballet in the grand manner of Petipa, spiced with elements of czardas and mazurka. The choreography mixes the regal opulence of courtly manners with gypsy ardor, as the ballerinas in sumptuous tutus and their gallant cavaliers clap their hands, toss their heads and flash broad smiles.

This ballet is one of Balanchine’s most precious gems, and its revival by the Farrell troupe made a welcome addition to the company repertory.

On opening night, Heather Ogden and Pavel Gurevich made a dashing, dynamic couple, leading the octet of dancers in Pas de Dix with style and vigor. Despite the extremely fast tempo set by the conductor of the Opera House orchestra, Allan Lewis, the cast virtually nailed every step and turn of the demanding and speedy choreography. I watched the dancers in awe – they were able not only to sustain the breakneck speed, never missing a beat, but made the dancing seem easy and fun.

The repeat performance on the Saturday matinee looked even more impressive. The orchestra mercifully slowed the tempo a notch or two, allowing the dancers and the audience to truly appreciate Glazunov’s rich and colorful music and luxuriate in a marvelous world conjured by Balanchine.

The next dance on the program, Duo Concertant, established the intimate atmosphere of a chamber music recital. This piece is a result of two remarkable artistic collaborations. Igor Stravinsky composed and dedicated Duo Concertant to the violinist Samuel Dushkin, with whom he premiered the work in Berlin in 1932. This was the only piece of Stravinsky’s music originally conceived for violin and piano; and it’s widely regarded as a first-rate masterpiece.

Forty years later, Balanchine gave Stravinsky’s formidable score a new life, creating a piece with the same title for the New York City Ballet’s Stravinsky Festival. In his ballet, the choreographer pays a special tribute to the music of his greatest collaborator and friend: the dancers share the stage with the musicians.  During the entire first movement, titled Cantilène, they attentively listen to their playing, standing motionless behind the piano and letting the music speak for itself. A jagged and thorny violin solo is accompanied by a more subtle and lyrical piano melody as if the violinist and pianist (the excellent Corey Cerovsek and Glenn Sales) are engaging in an animated dialogue, with the piano keys attempting to calm down the strings.

As the second movement begins, the dancers, visibly inspired by the music, take center stage. Clad in simple practice clothing (the woman wears a blue tunic, the man a blue shirt and black tights), they mirror the brisk and prickly sonorities of Stravinsky in a series of exquisite duets.

The dancers’ personalities inevitably shape this work; and on both performances that I saw, Natalia Magnicaballi and Michael Cook beautifully captured the essence of Duo Concertant, finding the right balance between the frantic and the rapt. I especially enjoyed the final section of the ballet, with its fluid lyricism and veiled mystery. Here Stravinsky the Modernist is at his most Romantic. Balanchine, in turn, creates a wondrous interplay of light, shadow and movement, deftly accentuating in motion the poetic and dramatic intentions of the score, so that this seemingly abstract ballet becomes a poignant theater of love and longing.

The exuberant Tempo di Valse brought back the festive mood and reminded us that the holiday season is just around the corner. Set to Tchaikovsky’s “Waltz of the Flowers” from The Nutcracker, this gorgeous ballet for 15 ballerinas includes some of the greatest Balanchine choreography.

It was a real treat to hear Tchaikovsky’s beloved music and see the wonderfully intricate dancing in a totally different setting – with no story and decorations, just the music and movement. On opening night, the newest addition to the company roster, Paola Hartley, danced the central role with admirable musicality and fervor. Alison Basford and Valerie Tellman had a nice turn in demi-soloist roles; but it was the magnificent dancing of Heather Ogden in the ballerina role during the Saturday matinee performance that moved me the most.

The program culminated with Agon – a Stravinsky-Balanchine masterpiece and one of the quintessential ballets of the 20th century.

Agon (1957) was the third and final ballet in the Stravinsky-Balanchine “Greek dance trilogy,” which included their groundbreaking Apollo (1928) and Orpheus (1948).

Music critic Alex Ross wrote in the New Yorker in 2010, “the Balanchine-Stravinsky collaborations – most notably, Orpheus and Agon – remain essential viewing for anyone wishing to understand fully the composer’s work. In these cases, you cannot speak of steps being imposed on the music, since Stravinsky tended to compose to Balanchine’s requirements. Agon becomes an even more cogent, vital piece with the addition of the choreography; you realize that Stravinsky’s trim sonorities are like sonic muscles, setting bodies in motion.”

Agon is a challenging ballet; its movement patterns so extraordinary complex and unique in their geometry and spatial logic that with each viewing of this piece I am left with more questions than answers. Yet each time I discover and learn something new.

Like most of Balanchine’s black-and-white ballets, Agon has no plot or common thread. It has three distinctive parts; and each part is structured as a series of short episodes, mostly consisting of trios and quartets. The choreographic vocabulary here is inherently classical. The dancers’ steps look highly athletic, yet deceptively simple, often pedestrian – measured and cool at times, swift and frenetic at others. As such, Agon is a study in control and precision; and it’s an endurance test for the cast.

The Farrell dancers rose to the occasion, riding the atonal waves of Stravinsky’s score with cool confidence and high spirits. Paola Hartley gave a tantalizing rendition of the Bransle Gay solo, seductively moving her shoulders to the sounds of castanets in the score. Elisabeth Holowchuk and Michael Cook danced the pas de deux with admirable exactness and assurance; Ian Grosh and Matthew Renko delivered an impressive Bransle Simple; and Kirk Henning was superb in Sarabande. 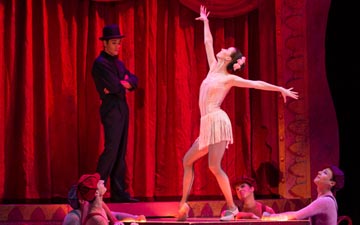