The first dance company to perform at the SFJazz Center, Zhukov Dance Theatre, presents Product 06 for its sixth season. This completely new venue for dance pleasantly surprises me with a feeling of open, airy space and a moderately-sized thrust stage with no wings or curtains. The sight lines are excellent and the intimacy between dancers and audience is palpable, given the closeness of the seats.

Artistic Director and Choreographer Yuri Zhukov’s initial training was at the Vaganova Academy of the Kirov Ballet (now again the Mariinsky), where he danced in St. Petersburg before emigrating to San Francisco to join SF Ballet as a principal dancer. Several years later he put in a stint with the Birmingham Royal Ballet, then returned to the West Coast to teach. In his travels from Russia to America to Europe and finally back to California, he was greatly inspired by contemporary choreography as opposed to the pure classicism of his roots (unlike one of today’s prolific choreographers, Alexei Ratmansky, who has found a creative way to employ the Russian classical vocabulary in his own refreshing way). Zhukov says of his development, “I spent many years playing the Prince. But creatively, my heart was moving in a different direction. I am aiming for a fearless choreography that is more expressive of the current world, a vocabulary in which the ballet is almost invisible–except for the virtuosity of the dancers.”

The evening opens with Enlight, directed by Zhukov and choreographed with the dancers, Jeremy Bannon-Neches, Doug Baum, Christopher Bordenave, Rachel Fallon, and Nick Korkos. The most striking feature of Zhukov’s choreography is that it doesn’t focus on building a structure through creating a series of phrases formed by groups of steps, much like music does with the notes forming phrases that intertwine, but it attempts to evoke feelings through some subliminal, mysterious process of suggestion rather than manipulation. He doesn’t declare that the audience should read his work in a specific way; instead, he offers an environment on stage that nurtures the possibility of different, individual or collective, reactions or interpretations. The dancers seem totally attuned to his artistic wavelength and give us some superlative dancing, both tender and fierce, with Fallon and Korkos as striking standouts.

Zhukov has invited Israeli choreographer Idan Sharabi to create a new work, Spider on a Mirror, for the troupe, the first time he has shared the bill since the company began. This composition is a bit in the vein of trendy contemporary dance-making that I am not fond of– for example, that of the recent work shown by Nederlands Dans Theater the week before in Berkeley. That isn’t too surprising as Sharabi danced with the Dutch company a few years back. To his credit, there are sections I do find quite compelling: one in which a distraught man (Bordenave) writhes in torment and tries to shoot himself and a second in which another man (Korkos) speaks about how he worries that when he opens his mouth, he becomes less visible to people who only notice his stutter. I am also disappointed because I had seen this piece during the summer at an open rehearsal in the studio and it was much more electrifying and the dancers were more tightly engaged with each other. At times the choreography doesn’t seem to fit this space, which demands more adjustment when moving from studio to stage. Nonetheless, the dancers do a remarkable job with what they are given. 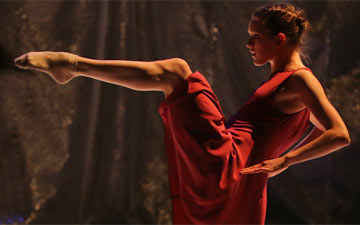