There is something deeply satisfying in watching a dance company grow from its first season through its current fifth year, especially when the production values remain consistently high.  From the beginning, Yuri Zhukov, director of Zhukov Dance Theatre, has proven his talent for seeking out excellent dancers, ensuring a unified visual aesthetic linking lighting, sets and costumes, and fostering a remarkable cohesiveness among the dancers despite a relatively short rehearsal period.

Two years ago, for Product 03: Shared and Divided, Zhukov assembled a particularly strong cast which meant that the choreography could be much more demanding.  At times it was positively exhilarating.   Serendipity prevailed and five of those six dancers plus two new recruits went on to appear in last season’s Product 04: Dreams Recycled, a work so intensely evocative that afterward I went to bed and spent the whole night dreaming I was performing in an extrapolation of the piece.

This time around with Product 05: Coin/c/dance it is interesting to note how the composition of the cast and the theme of the piece interact to help create something very different from his previous work.  Zhukov uses a very broad palette and he knows precisely how to mix the colours and apply them with nuanced brush strokes to the canvas.  This is both a metaphor for his productions and a literal truth as he is an accomplished visual artist, both as a painter and as a set designer, having created sets for San Francisco Ballet, Oregon Ballet Theatre and his own company.   The stage is defined by twenty-foot walls of bubble wrap across the back and on the left and right sides, which lend a shimmery, silvered air to the space.  Zhukov has an acknowledged hand in everything except the lighting by David Szlasa.  The choreography is jointly credited to the dancers and the costumes to Jarred Garza, and Zhukov is responsible for the remix of music by Johan Johannsson, Yan Jun, Dan Brown, Arc of Doves, Jean-Luc Godard and Dino Saluzzi, Katto, Arvo Part, Octavious, Sean Canty and Miles Whittaker plus his own additional music.  Something of a renaissance man, I have to say.

Coin/c/dance is ostensibly about the coincidences of life and how situations evolve out of chance encounters or circumstances.  I don’t feel that the idea itself can be easily demonstrated through choreography, but that doesn’t mean that the resulting ballet wasn’t made through a process incorporating coincidence and it is an accomplished work in its own right.  Coin/c/dance has movement textures decidedly different from the more balletic/athletic ones of the previous two concerts.  Here there is more slow deliberation, tender simplicity,  gestures gently expanded into full-blooded dance vocabulary and also more time and space to contemplate what is happening on stage and not just have an immediate visceral reaction.

Some memorable sections include a pas de deux, danced by Annick Schadeck and Nick Korkos, which is an elegant physics lesson about gravity, how mass and bodies effect each other. Another is a trio for two men and a spotlight on wheels.  Doug Baum steers the enormous lamp, keeping it on Martyn Garside who makes the most of his time in the limelight, executing appropriately narcissistic movements.  They switch roles and finally dance together in unison. Both are exceptional performers, but Baum deserves mention as he has grown tremendously as an artist since last year.  Using a live video projection as the backdrop, the segment of three men harassing one woman, Madison Hoke, is almost too intense.  Hoke has already established herself as a figure in a gray dress who moves with a vulnerable fluidity, and to see that vision overwritten is hard to take in.  Then there is another pas de deux with the attention-commanding long-limbed Andrea Thompson partnered by Jeremy Bannon-Neches.  The ensemble works as a giant beast with one brain controlling all the parts.  Each dancer remains an individual exhibiting their idiosyncrasies, but moving with a common intention . You would never know that in the seven-member cast only two dancers (Baum and Garside) had worked with Zhukov before.

The only regret is having to wait a whole year to see this company again.  The troupe debuted just as the economy nose-dived and the continued shortage of arts funding is preventing the normal growth of this high-level ensemble – what an unfortunate coincidence. 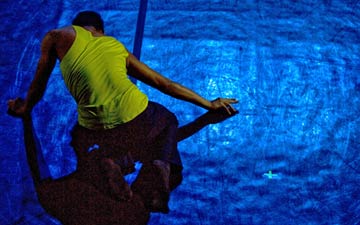