Like every December, New York is teeming with Nutcrackers, ranging from the appealingly homespun Yorkville Nutcracker (choreographed by a local teacher and sometime company-director, Francis Patrelle) to the Joffrey Ballet School’s crisp, traditional version and a naughty, Baroque-style burlesque currently playing at the Minetta Lane. (The latter, Nutcracker Rouge, by Company XIV is rather good, though obviously not appropriate for the typical matinée audience.) And there are many, many more. The newest arrival to the party is an ambitious staging by Michael Chernov for Gelsey Kirkland’s new semi-professional troupe, based at the couple’s three-year-old ballet academy downtown.

So far this season I’ve seen three “traditional” Nutcrackers: Ratmansky’s version for American Ballet Theatre, Gelsey Kirkland’s, and the familiar and much-loved 1954 staging by George Balanchine for New York City Ballet. All three have their charms; it is a testament to Tchaikovsky’s score that it is able to sustain markedly different interpretations. This is true even when the score is poorly played, as it often is. I suppose it’s also a testament to Petipa (who wrote the libretto) and his sources, Alexandre Dumas père and E.T.A. Hoffman, that the tale continues to capture our imagination, year after year. Like Tchaikovsky’s two earlier ballets, at its heart, Nutcracker is a tale of good and evil – the mouse king vs. the Nutcracker Prince, order over chaos. Like Sleeping Beauty, it is also a ballet about growing up.

Its main characters can be played by small children (as in Balanchine’s version), by adolescents (as in Ratmansky’s), or by young adults (as in Chernov’s). The tone can be funny, sweet, or satirical, as in the case of Mark Morris’s Hard Nut (notably missing this year). The role of Masha (or Marie, or Clara, as the case may be) can be danced on or off pointe. Gelsey Kirkland famously performed the role on pointe alongside Baryshnikov when she was twenty-five. She was a particularly delicate, sensitive Masha, pure and classical and at the same time girlish and brimming with emotion. When Marie and her prince are played by small children, what one notices most is their poise. How charming it is to watch tiny dancers execute simple ballet steps, glide and bow to each other, walk with pointed feet, lift their knees in emboîtés. Small mistakes – a dropped toy or a false start – only add to the ballet’s appeal. When the dancers are a bit older, like Adelaide Clauss and Duncan McIlwaine in the performance I saw on Dec. 13 at American Ballet Theatre (both are in their early teens), their personalities begin to emerge and shape their characters. We remember their faces, the way they move and relate to each other. Clauss, tall, long-limbed, inquisitive, could easily play Alice in Wonderland; McIlwaine is muscular and steadfast, a boy’s boy. One senses that this is a prince who wouldn’t shy away from a good fight.

When the principal roles are played by adults, we focus more on their interpretation and the qualities with which they imbue the steps. The Marie I saw at the Gelsey Kirkland Ballet performance in the afternoon of Dec. 15, Dawn Gerling, had the same gentle, wide-eyed look I remember from Kirkland’s televised performance with Baryshnikov. Her transformation into the character was complete, with a clear dramatic through-line; her focus never slackened. But, because she is a woman and not a child, one was all the more aware that the interpretation was all artifice, a finely-wrought construction rather than a window into Gerling’s own identity as a dancer. Her prince, Cristian Laverde Koenig, had less acting to do; once freed of his Nutcracker mask, his role consisted mainly of supporting his ballerina, which he did with dignity and refinement.

Despite the fact that the Gelsey Kirkland Ballet did not have an orchestra, this was an impressive production all around. Chernov and Kirkland’s concept stresses the notion of the Nutcracker as a journey into an ideal realm. There is no “land of the sweets,” as in other versions, but rather a theatre in the sky, inhabited by an elegant court augmented by foreign guests. The “national” dances of the second act, choreographed by teachers at Kirkland’s school, are tasteful, executed with grace and good taste. At this performance, the dancers, a mix of students and young professionals, were all beautifully coached, down to the angle of the head and the direction of the gaze. Their expressive, sensitive arms and hands were especially lovely. Several of the production’s sets and costumes were purchased at auction from the defunct New York City Opera. This was a very clever move. The staging has undertones of danger, as when a swarm of rats appears to devour the adorable, tiny Bugle Boy (Charles Klepner). Even the Grim Reaper makes an appearance, in the party scene no less. If anything, this version takes its subject just a tad too seriously – it lacks playfulness. But for a new ensemble, the creation of such a thoroughly polished, lavishly-designed production is impressive indeed.

The Nutcracker that surprised me the most this year was Alexei Ratmansky’s for ABT. When it premièred, in 2010, it seemed fussy, diffuse. What a difference three years makes! The company has settled into the production’s eccentricities; they feel organic, and fresh. What shines through is its warmth, humor, and open-heartedness. My companion was moved to tears. Here is a ballet in which the children behave like children, scampering up and down a staircase, eating the party food before the guests arrive, transitioning from a bratty jumps to limpid formations that wend their way around the Stahlbaum’s living room. Hudson’s two-dimensional, Biedermeier designs are busy but stylish, vibrantly colored. (If only the tree’s transformation were more impressive.) In the second act, Sugarplum’s assistants, played by children, flirt and gossip; the boys dare each other to approach the girls, like kids in a schoolyard. But the children also suffer and show grit. In the battle scene, when the Nutcracker is felled by the Mouse King’s sword, Clara mourns over his slumped body and lovingly revives him. (Interestingly, a similar image appears in Ratmansky’s recent Symphony No. 9.) The same kindness and concern is shown by the Nutcracker boy in the snow scene. In one of the ballet’s most striking plot twists, Ratmansky’s beautiful, silvery snowflakes turn deadly. Clara faints from the cold, but her companion protects her, keeps her alive.

Even the toys here have souls. The dance for Harlequin and Columbine is not just a doll dance, but a miniature pas de deux, in which Harlequin falls to his knees and declares his love and Columbine squirms with delight. In the battle, the toy soldiers roll up into tight balls on the floor and tremble, afraid of dying. If the beauty of Balanchine’s Nutcracker lies in its stylization and clear, uncluttered storytelling, the charm of Ratmansky’s is just the opposite: with each viewing one notices something new. The company rises to the occasion – it looks energized. If ABT could afford a few extra orchestra rehearsals, it could be even better. (During the battle scene, one violin came in several beats before the others. This was just the most egregious musical snafu.) Money, the eternal problem.

There is nothing messy about New York City Ballet’s staging. It bubbles along seamlessly from party to pas de deux. From the start, it is clear that Balanchine is more interested in symbols than in sentiment. The ballet’s most heart-catching moment – when Marie rushes back into the parlor to check on her Nutcracker doll – is not about love, but about our attraction to the unknown. The interpolated music, a violin intermezzo from Sleeping Beauty, is full of anxiety and longing. It is adult music, and by inserting it here, Balanchine is letting us know that underneath the ballet’s cozy surface lies something more difficult to understand. The intermezzo leads directly into the ballet’s most famous scene, when the Christmas tree grows to monstrous proportions. (This is the moment children remember most vividly.)

Balanchine’s Nutcracker is not based on real-life logic. He makes no attempt to explain the identity of the Sugarplum Fairy and her Cavalier. One simply accepts them as ideals of poise and perfection, as symbols. Sugarplum transcends even the laws of physics, with the help of a bit of theatrical magic: she glides on pointe. (To do this, she steps on a panel that is pulled across the stage.) Ratmansky has come up with a different solution to Sugarplum conundrum: Clara and the Nutcracker boy share the stage with their adult avatars. As the children emerge from the skirmish with the rats, the princely couple enters from upstage left. At first, the two couples trace the same steps; then the adult dancers (the regal Veronika Part and Marcelo Gomes) peel away to dance a virtuoso pas de deux, full of spinning jumps, swooping catches, and a spiraling lift over the cavalier’s shoulder. But the adult couple also shares child-like moments, as if the children lived on inside of them. They seem to represent how the children imagine themselves, in the future. The image is deeply poetic.

Balanchine saves his most dramatic choreography for a role that does not appear in the original libretto: Dewdrop. Again and again, in the Waltz of the Flowers, she rides the wave of Tchaikovsky’s waltz’s second melody, played on the strings. Se plunges through the kaleidoscope of flowers like a turbine. Dewdrop is a force that won’t be denied. In the performance I saw, the role was danced by Tiler Peck. She was incandescent, powerful and relaxed, her steps utterly clear and, paradoxically, seemingly effortless, impetuous. While she danced, time was suspended, and music and movement were one and the same. Balanchine’s real passion – dancing – comes most fully alive in this moment.

What is clear is that every Nutcracker is a reflection of its creator. Ratmansky’s is tender and full of fantasy; Chernov and Kirkland’s is reverential and deeply considered; and Balanchine’s is diamantine, lucid, with no space for indulgence. The Nutcracker can be all these things.

New York City Ballet’s Nutcracker runs at the David Koch Theatre at Lincoln Center through January 4. American Ballet Theatre’s Nut is at the Brooklyn Academy of Music through Dec. 22. 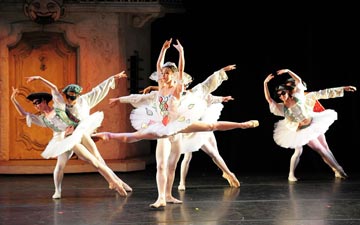 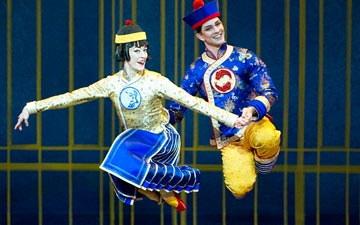 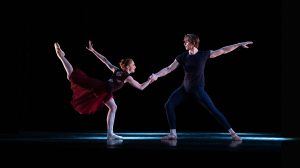