Why do choreographers think that they need to tinker with, or even overhaul, the old classical ballets?  That’s a good question in the case of this Giselle danced by San Francisco Ballet.  But it’s more important to ask why the version that Helgi Tomasson premiered in 1999 is so under-rehearsed and lacking in coaching these days.  Yes, yes, I know there is never enough time, or money, or whatever excuse the management tosses out.  When I take my seat at any performance, the one thing I want most of all is to be moved.  My job as a critic is to figure out why the dancers succeed in touching me; and if I leave without experiencing that magic, then I must articulate how the production fails to do this.

On Saturday, the opening night casting – Yuan Yuan Tan as Giselle with Davit Karapetyan as Albrecht – creates its own problems.  Though Tan dances with a wonderful lightness and an elegance not quite suited to a naïve peasant girl, she never really emotionally engages with the ardent Karapetyan, who possesses nuanced acting and strong technique, and deserves to have a partner who can match his level of commitment to crafting a role. Hilarion, excellently portrayed by Rubén Martín Cíntas, is adamant that he loves her more than Albrecht ever could, but Tan is quite direct in letting him know that she doesn’t love him, and when she goes through the motions of saying she loves Albrecht, it isn’t heartfelt.  Without that loving bond, the story’s poignancy evaporates.

In the first act, the company is not coached to demonstrate the differences between the peasants and the nobility.  The former lack earthy charm and provincial comraderie, while the latter fail to show commanding authority and aristocratic snobbery; without this context, Albrecht’s denial of his origins (he’s really a count)  doesn’t have the pivotal impact needed to drive the story forward.  Anita Pacotti as Berthe, Giselle’s mother, does an admirable job of combining both love for her daughter and troubled concern over her defiance in dancing despite her weak heart.  Her mime, warning of possible death and the supernatural wilis, is chilling.

Tan’s “mad scene” is another disappointment.  While I understand that she is given almost no free reign within the tightly-set choreography, she needs to find ways to create more moments of emotional contrast.  Because she has not convincingly shown that she deeply loves Albrecht, she can hardly be distraught by his betrayal.  The post-mortem on this Giselle attributes her death to the effects of over-exertion on her weak constitution, and not a broken heart.

The second act doesn’t fare much better.  Wilis, being ghosts or spirits, should seem nearly transparent and weightless.  The corps de ballet works beautifully in unison, but is rather heavy-footed in several passages, due to the choreography as much as to their own mildly deficient footwork.  One spot, in particular, is the sequence of failli, fouetté into arabesque (a step across, then a jump throwing the leg in front and changing direction in the air to face the other side with the leg in back) Here the fouetté is landed and held in plié (with a bent knee), while in traditional versions there is a small sauté (jump on one foot) in between, giving a much lighter look and feeling.  Sofiane Sylve, as Myrtha, the Queen of the Wilis, displays a rigidity in an attempt to define her power over her subjects and the mortals, Hilarion and Albrecht.  If only she could discover her inner strength underneath a facade of pliability and etherealness.  Even her jumps could use more ballon (a hovering in the air) to disguise her average elevation and give the illusion of flight.

Again, Tan’s inability to show her love for Albrecht yields a meaningless dialogue.  He ends up being a mere porteur during their pas de deux, and she does not seem to be desperately pleading with Myrtha to save him from dancing to death.  In the very end as he weeps on her grave, he could just as easily be mourning the missing artistic partnership as grieving the loss of his lover.

Wednesday evening’s performance is another experience entirely.  From the first chord of the score, conductor Ming Luke inspires the orchestra and imbues the music with energetic tempi and sensitivity to the narrative.   Lorena Feijoo and Vitor Luiz in the lead roles are superb.

Luiz’s first entrance reveals him as a man of noble bearing who orders his squire Wilfred about, and yet he goes on to show that he loves a humble peasant girl. When confronted by Bathilde, his other fiancée, his weariness of court life becomes apparent, justifying his seeking a more authentic existence.  With Giselle’s death, he is grief-stricken and remorseful, and refuses to leave her, only to be dragged away by Wilfred.

Feijoo deftly shapes her Giselle, first as a shy young woman who is nevertheless in love, and gradually warms up until she gazes radiantly at her suitor.  Even when Albrecht leaves the stage during the visit of the royal hunting party, she continues to search the crowd hoping to find him.  The revelation of his duplicity shatters her, she becomes unhinged and dies in his arms.

Even as a wili in the second act, Feijoo’s Giselle protects Luiz’s Albrecht from the vengeful Myrtha by overcoming her powers with pure love.  Every step she dances is either to distract the wilis’ queen or to prove that her devotion to her lover is even stronger beyond the grave.  Both dancers quietly keep their ample techniques veiled behind their joint artistic vision, and that is true virtuosity.

I can only hope that San Francisco Ballet will one day see the value in taking the time to nurture all the dancers and help them to become better artists.  It is one thing to hire principal dancers who have already begun to mature in the classical roles, who have been fortunate enough to have trained in schools and companies where dancing, music, and acting are inseparable, but it is quite another responsibility to ensure that the entire company performs with deep artistic integrity. 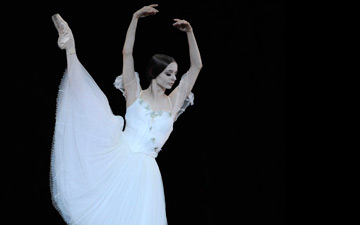