There’s nothing like a good Giselle. On top of the romance, the forest, the lithe spirits and the bitter vengeance, the magnificent score and choreography soothe the soul that might be feeling, say, a tad unsettled by the contemporary trend toward atonality. It was with that sense of soul satisfaction that the audience exited the War Memorial Opera House after San Francisco Ballet’s opening night of Giselle, choreographed with an eye to the 1841 original by artistic director Helgi Tomasson after Marius Petipa, Jules Perrot and Jean Coralli.

Maria Kochetkova brought Giselle to life with pristine technique and sensitive acting, both cultivated during her training at the Bolshoi Ballet. (The first of seven SFB principals dancing the role, she is the only one cast in two performances.) In story ballets, Kochetkova modulates her phrasing in the service of her characters; floating on the music, she expressed Act I’s breathless longing by hanging just a hair behind the beat, or hesitating a fraction of a second before touching Albrecht’s hand and drawing back. Kochetkova didn’t take a step until its time had come, so each battement, ballotté and bat of the eye moved the story forward and lured the audience into Giselle’s emotional world.

Tall, dark, handsome and unaware of real-world consequences, Vitor Luiz’s Albrecht was a self-interested rake, bubbling with a charm he knows is irresistible, yet as caught in Giselle’s web as the rest of us. Luiz and Kochetkova have a potent chemistry onstage and take pleasure in each other’s virtuosity; here they seemed to employ their dancing as a metaphor for their characters’ growing relationship: Starting hesitantly in the early part of Act I, Giselle appeared to be teaching Albrecht to dance, and as he fell more deeply in love he also grew in artistry.

As the act progressed, they increased their energy, attack and even precision, building to Giselle’s hops on pointe and blistering manège of piqué turns, and Albrecht’s bounding jetés and entrechats. Conductor Martin West was the unseen third member of their relationship. Reading the dancers’ rhythm, he led the orchestra through Adolphe Adam’s score with exquisite timing that heightened the joy and deepened the heartbreak.

Many dancers play Hilarion as a brutish dolt whose greatest achievement will be dragging Giselle back to his cave. Pascal Molat presented a gentler, more intelligent character who is sincerely fond of Giselle and concerned for her well-being, though as heedless as Albrecht of unintended consequences. Shannon Rugani gave a haughty and entitled Bathilde; crystal clear on the class boundaries between herself and the peasant girl, she demonstrated just how far over the line Albrecht had gone.

Kochetkova and former SFB principal (now ballet master) Katita Waldo, as Berthe, create a natural, affectionate mother-daughter relationship mother that pays off at the end of the act. Waldo offered caring embraces and gentle reprimands, while Kochetkova absentmindedly rested her hands on Waldo’s shoulders as they watch the villagers dance. When, after her nicely modulated mad scene, a despairing Kochetkova ran into Waldo’s arms, their mutual anguish made the heart ache.

Act II was everything one wants from a Giselle. In the misty forest clearing, magically realized by designer Mikael Melbye, Luiz held every lily stem like it was made of blown sugar and might crumble in his hands. He held Kochetkova the same way, taking care not to harm her further. Sofiane Sylve’s Myrtha would have none of it; she was ice-hardened steel as she dispatched Hilarion and gave Albrecht no quarter. Sylve knows that it takes more than a grimace to make a menacing Myrtha. But Myrtha was once flesh and blood too, and every so often Sylve couldn’t resist a peek at Luiz and Kochetkova’s pas de deux. Even that hardest of hearts was softened by Luiz’s tender partnering, airborne tours and fluttering entrechats six (which could truly kill a man), Kochetkova’s six o’clock penchées and soaring grand jetés, and the dying of the light between Albrecht and Giselle.

The corps de ballet brought a sense of community to the first act and, after a rocky start, nice unison as the ghostly phalanx of Act II. Myles Thatcher was an understandably worried squire Wilfred, while Sasha De Sola reappeared with Dores André as Mona and Zulma (here called Solo Wilis).

Miming throughout this Giselle is clear and a great boon to the story; more ballet companies should include it, especially Berthe’s warning against too much dancing, which Waldo delivers with a fierce glare that gives one pause. Unfortunately, Tomasson replaced the Peasant Pas de Deux with a Peasant Pas de Cinq. It’s all right, as diversions go, and soloists Clara Blanco, Sasha De Sola, Koto Ishihara, Daniel Deivison-Oliveira and Hansuke Yamamoto danced their solo variations well. But it’s doom for the story’s momentum, whereas the Peasant Pas shows the audience the happy romantic life Giselle longs to have and makes her fall that much more precipitous. In this case, Kochetkova and Luiz told the tale beautifully themselves. 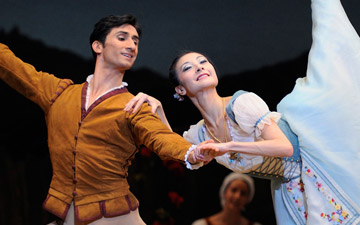