There are almost 50 works in the repertoire of Tanztheater Wuppertal Pina Bausch and this is surely one of several that must be regarded as seminal.    Created in the year of its title and premiered in May 1980, it was the first work to follow the death of Bausch’s partner, Rolf Borzik, after his long battle with leukaemia.   For the previous six years, Borzik had also been the company’s designer and scenographer and he had begun the design process for 1980 before illness took its toll.  His concepts were completed by Peter Pabst, who went on to become a permanent member of Bausch’s creative team, designing stages for the 24 works that spanned the carnation field of Nelken (1983) to the cloth sheets of Bamboo Blues and Sweet Mambo (2007/8).   It is not surprising, therefore, to view the many overlaying vignettes that comprise 1980 as representing a bridge between departure and renewal.

It is also a vital stepping-stone on the way to Bausch’s later monumental, landscaped works for which Pabst’s designs are such a vital ingredient.   The process had already begun with Borzik’s dirt-covered stage for Le Sacre du printemps (1975) but 1980 represents a paradigm shift in further deconstructing the boundaries of theatrical territory.  The natural environment ventures inside the theatre, with the stage opened up to its fullest extent and filled with turf to create a flat, grass-covered parkland complete with a small Bambi-like deer as a permanent observer of events.   Standing alert at the rear of the stage, the deer is too far away to discern whether the product of taxidermy or a toy factory.

Records suggest that in its early iteration, 1980 lasted around four hours and now it concludes after three hours and 35 minutes (including an “intermission”) and so there appears to have been some editing along the way.   Many will say that it is still too long although I remained happily enthralled throughout and found myself regretting having missed the 25 minutes or so that seem to have been excised.   In the longer iteration, 1980 was the first Bausch production to appear at Sadler’s Wells (in 1982) and this long association has been recently recognised by the theatre naming its boardroom after the choreographer (who died in 2009).

Four of the cast at this performance (Mechthild Grossmann, Nazareth Panadero, Jean-Laurent Sasportes and Lutz Förster, now the company’s artistic director) appeared in the Wuppertal premiere, nearly 34 years’ ago, which is as remarkable as it sounds.  The other 15 dancers are all also long-serving stalwarts of the company and this team are joined on stage by a magician (Reiner Roth), a veteran gymnast (Peter Sandhoff) and two musicians (Robin Brightman on violin, and Joachim Bärenz playing the harmonium).

The cast’s collective maturity serves the work well since the central theme of many of the 50 or so episodes concerns the passage of life; concentrating especially on memories of childhood and youth contrasting with images of old age.   This is most powerfully demonstrated by the back-to-back juxtaposition of Judy Garland singing her signature song Over the Rainbow; firstly, on the soundtrack of the Wizard of Oz (when she was aged 16) and then at a concert, probably recorded not so long before her death at the age of just 47.   The contrast in the delivery of the same lyrics is extreme from the youthful hope and expectation that there really is a place “where troubles melt like lemon drops” to the shaky, deeper voice, which though still penetrating lacks the precision and discipline of the younger Garland.  The withering of age can also be deduced from the game old gymnast practicing in the background on his parallel bars.

The work is littered with the consequences of aging.  Farewells take many forms.  In the most poignant episode, cast members take their leave from a solitary colleague, Ruth Amarante (her back to the audience), each in turn uttering a few standard words (of the kind we might all write on a colleague’s leaving card) and the preliminary tableaux to this group goodbye is repeated as the very final scene.  In another vignette, Sasportes rolls up some turf to create a burial plot.   There are sinister overtones when Förster takes up a place amongst the audience and yells at each member to explain what makes them scared.  As the dancers retreat in a line into the darkness upstage they have to progressively shout their answers in response.  In these moments, it seemed like an x-rated version of A Chorus Line.

And competition is never far away: there is a comic sequence in which the performers try to outdo each other in a shapely leg contest; cups are awarded on the basis of a clapometer for contestants with the most touching sob-story (which seemed to cleverly foretell the predilection of today’s reality TV shows); and then there is the competitiveness of affluence with Julie Shanahan providing ongoing light relief as a flirtatious, but panic-prone, woman who gets her shoes from Imelda Marcos, swaps African diamonds for rubies with Liz Taylor and always has far too many parcels to carry.

Conventional dancing is rarely seen and when it comes it is always through the medium of Helena Pikon dancing poignant, lingering solos in the background or performing a duet with the water jetting from a garden sprinkler.   Age has certainly not diminished the thinly-veiled eroticism of these Bausch women; barely-covered in a fine collection of slinky evening gowns, they all exude a sexy double-whammy of confidence and glamour.

Underpinning everything is an air of rebellion, a view that all will be well despite the inevitable ravages of time.  And this is never better portrayed than in the magnificence of Grossmann’s one-woman defiance.  Dressed in a leather jacket, tight shorts and black tights (possessing stunning legs for a 65 year-old), she stalks the stage declaring in her comedy gravel-voice that everything is “Fantastic”.   She undresses Förster before lighting matches between his toes and singing “happy birthday” (later he repeats the exercise, upstage and solo) before letting us know that she knows him “personally” with an intonation that shouts a sexual intimacy.   Characters such as Grossmann and the equally charismatic Panadero are so much a part of this work that one wonders how well it will survive their eventual absence.   But happily the newer recruits such as Azusa Seyama, Fernando Suels Mendoza, Regina Advento and tiny Ditta Miranda Jasjfi are already firmly part of the Bausch legend.

Above all there is the same life-affirming optimism that we find throughout the Bausch repertoire, which is here delivered through regular bursts of conjuring tricks and comedy: a whole group sunbathing with just a different part of their body offered up to the rays while all else is covered up was hilarious; as was a tea party for Panadero and volunteer members of the audience; and Förster ordering his chorus line of women to smile and deliver a little “winky-winky” wave.  It is left again to Grossmann to find the comedy in her defiance of his instruction.

And, of course, there was the usual motif of a promenade where the dancers walk in single file while repeating the same hand and arm gestures.  Here, the walk takes them into the aisles and up alongside the audience adding yet another blow to the already shattered fourth wall.   No-one choreographs walking with purpose in the way that Bausch has done in almost every one of her works and here it is accompanied by the merest  turn of the head and the permanence of  a smile as these familiar faces pass by, each one delivering  the absolute conviction that all will always end well. 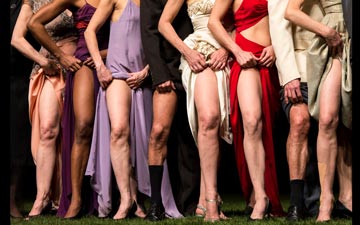