I was not surprised to discover that Farruquito was voted one of the world’s great beauties by People magazine since I spent much of this show wondering if he had a talking mirror in his dressing room.    He didn’t need a mirror on the wall to tell him of his beauty since he clearly knows it for himself but, if such a reminder were needed, there were always the adoring shouts of “guapo” from the audience.   I wonder if there’s another male dancer in the world who gets this kind of heckling!

Farruquito – the stage name of Juan Manuel Fernández Montoya – greeted each new dance with a complete costume change (colour co-ordinated shoes, three-piece-suit, shirt and tie) and having left the stage, each time, drenched in sweat with his long hair tangled and messy, he would re-emerge a few minutes later, once again pristinely groomed with that thick, glossy mane neatly draped around the designer goatee.  Farruquito hails from the flamenco stronghold of Seville and so perhaps, he had Figaro, the famous barber of that city, in the dressing room alongside the magic mirror!

One must consider his prettiness alongside a severely macho stage persona to appreciate the full-on Farruquito impact.   Here is a man who rips his jacket off and flings it high across the stage or drags it around to represent the Toreo’s cape: one who finishes every dance in a volcanic crescendo of steps, always stamping forward to face the audience with a stare of unbounded self-confidence, flashing his arms high in a flourish that says – like the Chorus Line song – “I can do THAT”!

By now, you may have formed the impression that I didn’t much care for Sr. Montoya and it is true that his thick machismo was very quickly wearing for my very English sensibilities.  But, this prejudiced view was significantly altered when he took the microphone, prior to the ubiquitous encore at the end of every flamenco show.  Farruquito’s stage persona was replaced by an altogether gentler man, one who thanked his audience fulsomely in both Spanish and English and paid generous tribute to the recently deceased legendary flamenco guitarist, Paco de Lucía.  It occurred to me that I had been tricked, very successfully: hoodwinked into believing that – without a specific role to play – the flamenco personality and the man were one and the same, not realising of course that blaming Farruquito for being exceptionally good at his job is akin to despising Anthony Hopkins for acting as Hannibal Lecter so convincingly!

As with so many artists in a culture where credibility is geographically constrained within the eight provinces of Andalucía, Farruquito has flamenco in his genes.   Everywhere you look in the Montoya family tree there are singers and dancers who have collectively developed a fusion of gypsy baile (dance) and flamenco in a dynasty that stretches back at least five generations.  Most notably, his grandfather, Antonio, was El Farruco, a self-trained gypsy dancer who championed the artistry of flamenco puro and was revered for the emotional force of the duende (spirit) in his performance and the clarity of his rhythmic control.   Farruquito’s first stage performance came at the age of 5, alongside his grandfather, in a show simply entitled Flamenco Puro, which premiered on Broadway.  Although El Farruco died in 1997, the grandfather and grandson can still be seen dancing together in Carlos Saura’s iconic film, Flamenco, accompanying the voice of the renowned singer, El Chocolate (yet another member of the Montoya dynasty).   It is well worth seeing.

At 15, Farruquito succeeded his grandfather as head of the flamenco puro movement (and as well as keeping it strong through performances such as this he also heads up the dance academy that maintains the Farruco genre).   Farruquito’s own style – as I have already noted – is ironically delivered with an ebullient, flashy, theatrical showmanship, which appears at odds with the simple gypsy baile of his grandfather, but then it would not be much of a one-man dance show in the modern world without such theatrical embellishment (and I suspect that there would not be too many guapo catcalls, either).

Farruquito’s dancing is unleashed with heartfelt, visceral passion and I suspect he needs a long lie-down when any performance is over.  But I found many of the numbers to be too similar in their patterns, structure and timing, and apart from trying (not very successfully) to detect the subtle differences in beat rhythms of, for example, the seguiriya and the alegrías, I found it difficult to distinguish one dance from another.

Variety came in the musical interludes between each dance (giving the barber of Seville time to get to work) and there were some exceptional contributions from the ensemble, not least in a beautiful guitar solo by Román Vicenti.   There were joyful exchanges between Farruquito and his singers, notably with the imposing presence of Mari Vizarraga, but I’m not enough of a flamenco purist to appreciate a whole 90-minute dance show emanating from a single set of limbs (although acknowledging that this is the essence of flamenco puro) and I would have appreciated the diversity of having a bailaora dance at least once.

I understand that the point of Improvisao is to replicate the intimacy of an authentic flamenco “happening” with the rounds of  interactive collaboration between its various elements (vocals, guitar, percussion, dance) taking place with different emphases in every performance.  However, it seems to me that the essence of that authenticity is best when far removed from a traditional proscenium theatre setting (certainly of the size of Sadler’s Wells).   In trying to turn this fundamental basis of flamenco’s identity into a theatrical show, but also keeping the essence of flamenco puro as being delivered by a solo dance artist, something is lost in translation, even if we can appreciate – without doubt – the remarkable capabilities and emotional expression of this charismatic dancer and his superb musicians. 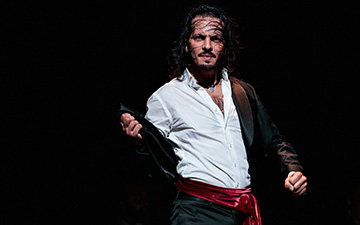 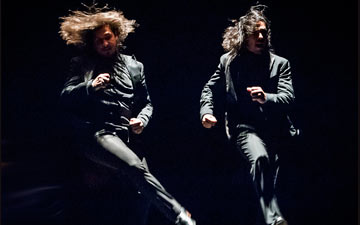