Marius Petipa knew first-hand the perils of a romantic affair between lovers of unequal social status. In 1847, when news about his amorous escapades with a daughter of a noble diplomat became public, the then 29-year-old Petipa, a poor dancer at the King’s Theater in Madrid, had to flee the country, for the enraged father of the young lady had challenged him to a duel.

Later that year Petipa landed at the Imperial Theater in St. Petersburg, Russia, to start one of the most prominent choreographic careers in ballet. He would ultimately go down in history as a founder of the Russian classical ballet style and the most influential choreographer of the 19th century.

In his memoirs, first published in 1907 in Russia, Petipa described his Spanish romantic calamities with humor and wit, calling his lady of interest “my Dulcinea” and adding a few embellishments of his own to the real events. (He claimed that the fateful duel did take place, whereas the overwhelming evidence suggests it didn’t.)

During his Spanish period (1844-1847), however, Petipa learned a great deal about this country’s national dancing.  His knowledge and understanding of the essence and spirit of Spanish tradition ultimately found its reflection in his ballets for Russian Imperial theaters, particularly in his two elaborate productions of Don Quixote. The ballet received its world premiere in 1896 by the Imperial Russian Ballet at the Bolshoi Theater in Moscow; and two years later was produced by the Imperial Ballet at the Mariinsky Theater in St. Petersburg.

The 1615 novel by Miguel de Cervantes about the improbable adventures of an aging hidalgo, Don Quixote, and his faithful squire, Sancho Panza, as they journey through 16th-century Spain is widely recognized as a magnum opus of Spanish literature.   In contrast, Petipa’s choreographic creation is hardly a masterpiece. The ballet’s plot is slight and incoherent. The eponymous character is trivialized as a trotting, delusional buffoon while the main story centers on the romantic adventures of a young couple – a penniless barber, Basilio, and his sweetheart, tavern keeper’s daughter, Kitri – as they embark on a quest to outwit Kitri’s greedy and overbearing father, Lorenzo, who plans to marry her to a narcissistic nobleman, Gamache.

It is accompanied by the relentlessly bombastic yet pleasantly tuneful music of Viennese composer Ludwig Minkus. The score isn’t a work of genius, yet it perfectly suits the vaudevillian flair of the ballet’s story and provides plenty of blaring brass moments to accentuate the emotional crescendos of the bouncy and invigorating choreography which blends classical ballet and Spanish-tinged character dancing to varied effect.

Despite its flaws, Don Quixote, if done with skill and passion, can certainly lift the spirit. It is a hilarious razzle-dazzle and a marvelous showcase of classical bravura for the leading dancers as well as the supporting cast. The ballet’s story is populated with an array of colorful personages and their scene-grabbing antics quite often lend the most memorable moments of the show.  Don Quixote, in the right hands, can easily claim the top spot among the great ballet comedies.

American Ballet Theatre brought its handsome and festive production of Don Quixote (staged by Kevin McKenzie and Susan Jones in 1995 and based on the original Petipa version and its 1900 revision by Alexander Gorsky for the Bolshoi Theater) for a five-performance run during the company’s annual visit to the Kennedy Center Opera House in April. The Sunday matinee performance I attended had all the prerequisites for huge success, featuring world-class principals Paloma Herrera and Ivan Vasiliev, plus a superb supporting cast.

Argentinian-born Herrera, now 38 years old, has been a principal dancer with ABT since 1995 and the role of Kitri has been her signature role for nearly 20 years. She knows the part like nobody’s business and possesses a stellar technique to set the stage ablaze with the virtuosity of her dancing. During the Sunday performance, her heroine came across as an elegant and sophisticated young woman, more a Spanish princess than a free-spirited and fun-loving peasant girl. Her Kitri was charming yet cold. Still, she obligingly took part in the silly and frivolous commotions of the story, never losing her poise and grace. She threw herself fiercely into her partner’s arms, flying like an arrow. She spun in a tornado-like fashion, effortlessly held her steady-state unsupported arabesques and drifted in midair in daredevil climatic lifts. Her virtuosic tricks – the juiciest part of the choreography – were executed with great skill yet little passion. I missed a sense of playfulness, mischievous wickedness and infectious fun in her acting. Her performance was technically solid but expressively muted.

Herrera was at her best in her solo numbers, especially in the Dream scene of the second act, gracefully gliding onstage as if in a reverie, surrounded by the mysterious dryads – an ethereal and enigmatic personification of Don Quixote’s ideal love.

Russian-born Vasiliev jump-started his performing career thanks to Don Quixote. No doubt many in the audience remembered his astonishing Washington debut at the Kennedy Center Opera House in 2007. The then 18-year-old Vasiliev and 21-year-old Natalia Osipova, at that time dancers of the Bolshoi Ballet, forever changed our perception about the well-worn and clunky Don Quixote. Theirs was the finest interpretation of the leading roles I have ever seen. The opulent and smart staging of the Bolshoi production added to the overall experience of sheer exhilaration and tremendous joy brought by the Osipova-Vasiliev partnership.

Physically, Vasiliev’s dancing is definitely one of a kind. He has an impressive skill to catapult himself up in the air and float in a seemingly endless slow-motion flight. His ability to turn is superhuman. His solo variations resemble a series of athletic feats, each one more exhilarating than the other; and he is a great showman, with a natural instinct for the stage and hunger for the dance.

Yet he invests his dancing with over-the-top intensity and heroic bravura, whether or not the choreography demands it. He has a tendency to take a long pause before each solo variation, and by doing so breaks the natural flow of the dance. He is hardly a paragon of classical style; his partnering skills are not flawless, and his acting often seems a tad overcooked as was often the case during his performance on Sunday. The audience, however, didn’t seem to mind his shortcomings, audibly gasping and cheering at his trademark acrobatic display.

The second-string cast delivered far more emotionally meaningful turns than the leads. Roman Zhurbin gave a heartwarming portrayal of the title character, imbuing his role with a dramatic touch. There was something utterly tragic, even poetic, about his love-stricken Don as he trotted through the action, visibly haunted by the flash-like visions of his beloved Dulcinea. Kenneth Easter was good sport as a cartoonish Sancho Panza, gamely tagging along with his hallucinating master. The sublime Hee Seo delivered an assured and supremely musical performance, doubling as street dancer, Mercedes, and the Queen of the Dryads. The stately and suave James Whiteside made for a dashing matador, Espada; and Alexei Agoudine played Gamache, Kitri’s hapless suitor, in the finest comic tradition of classical pantomime.

The corps de ballet was in an excellent form, illuminating the carnival-like atmosphere of the ballet with the sparkling energy and ardor of their dancing. The Opera House orchestra led by Ormsby Wilkins infused the Minkus score with the right amount of dynamic force and played with irresistible gusto. 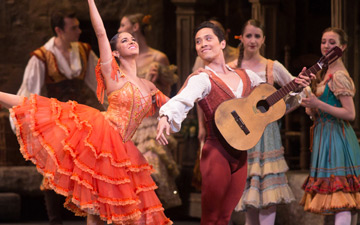 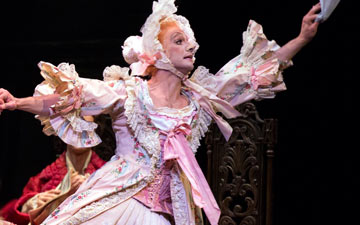