American Ballet Theatre (ABT) concluded its spring season at the Kennedy Center Opera House with a five-performance run of Frederick Ashton’s Cinderella, a legendary production that went down in history as the first full-evening ballet created by a British choreographer. It was premiered in 1948 at London’s Royal Opera House by Sadler’s Wells Ballet (which later became the Royal Ballet) just three years after the Bolshoi Ballet unveiled its original ballet of the Cinderella story, choreographed to Prokofiev’s score with Galina Ulanova in the title role.

“The big hit of Ashton’s Cinderella is its pair of Ugly Sisters, Helpmann and Ashton himself, and it’s the one Ashton plays, the Second Ugly Sister, who becomes the charmer of the evening,” wrote American critic Edwin Denby in 1949, distilling in one sentence the greatest triumph and the biggest pitfall of this production.

There is a certain irony in the fact that Ashton’s Cinderella heavily relies on the Ugly Sisters. Their vaudevillian turns and madcap cadenzas claim the lion’s share of the dramatic action; and, depending on the comedic skills of the dancers who portray them, these crazed “charmers” can make or break the evening.

When Ashton created the roles of Cinderella’s stepsisters, he had two prodigious comic talents at hand – Robert Helpmann’s and his own. A sharp and clever parody on human nature, the famous Helpmann-Ashton tandem became renowned for its humor, wit, excellent timing and perfectly-coordinated acting; and their double feature in Cinderella was considered one of the greatest comic acts in classical ballet. Over the years, not many dancers who took on these parts were able to rise to the Helpmann-Ashton level of comic genius.

On opening night, Roman Zhurbin and Craig Salstein made an admirable turn as the Stepsisters, playing the roles of Cinderella’s hapless tormenters with enough humor and zest to charge up the action. I was particularly impressed with the side-splitting acting and dancing of ABT’s soloist Zhurbin in the role of the First Sister. Demonstrating his grasp of the comic intricacies of this role and his innate gift for comedy, Zhurbin gave a sharp and downright hilarious portrayal of the vain and domineering bully who terrorized and manipulated everyone around her, including her timid and feeble little sister (played with a fine comic flair by Salstein.) On Saturday night, the performance of Kenneth Easter and Thomas Forster as the Ugly Sisters was overly mannered and only mildly entertaining; their exaggerated histrionics often dragged the production down.

Both nights that I attended were blessed with an exquisite Cinderella. Gillian Murphy gave this production a beating heart with her tenderly expressive and incisive performance, imbuing her role with passion, grace and good humor. (On Saturday night, Murphy stepped in for the injured Julie Kent.)

At the beginning of the ballet, garbed in a hideous gray dress, Cinderella is reduced to a downtrodden maid, who, virtually unnoticed by her family, skims around the kitchen, tending the fire or cleaning the floor. Amid the wild commotion of the stepsisters, one has to look really hard to notice her at all, for she seems to be always somewhere in the corner of the stage.

In those rare moments when her character took the spotlight, Murphy seized every opportunity to reveal the heroines inner world and did so brilliantly, combining her superlative technique with dramatic urgency and theatrical purpose.

Her Cinderella looked heartbreakingly sad when she enshrined her late mother’s portrait on the fireplace’s mantle-piece and solemnly lit the candle; and utterly childlike when she played with her stepsisters’ pink scarf as if this was the prettiest piece of fabric she ever held in her hands. She took her stepsisters’ antics in her stride, always keeping an understanding smile on her face. She tolerated her misery without succumbing to it. But one could tell that there was a fire within her soul and a big heart and even bigger dreams beneath her rags.

Dancing around her dismal quarters with a broom, she let her fantasies soar – her fleeting steps becoming a metaphor for her free spirit. Swirling across the stage, Murphy’s Cinderella looked entirely transformed – radiant, even jubilant, and liberated – as if her dire circumstances entirely disappeared and she was happily lost in the world of her dreams. Balancing the choreography’s poignant simplicity and exceptional daring, Murphy was terrific in every moment, her footwork precise and her upper-body wonderfully fluid.

We all know how the story ends: for her virtues and her unselfish love, Cinderella is ultimately rewarded by the Fairy Godmother, who, in this production, is miraculously transformed from a hunchbacked beggar into the glamorous lady equipped with a star-tipped magic wand.

Attired in a shimmering white gown, Cinderella claims the most spectacular moment of the first act, when she triumphantly circles the stage in the opulent carriage, heading to the Prince’s Palace and her marvelous future.

Cinderella’s stunning appearance at the ball in Act II is another visual highlight of this production. When she stands atop a grand staircase and looks around in amazement, a huge sparkling cloak trailing behind her, she looks as if she is wondering whether this is all just a dream. Then she walks down the staircase, etching every step with stately dignity and poise, as if declaring to the world that she is ready to become a princess. Murphy looked ravishing in this scene, bringing stylish manners and formal dignity to her role.

Cinderella’s first duet with the Prince is brief, but it contains some of the loveliest choreography of the entire ballet – this was Ashton’s tribute to classicism of Marius Petipa spiced with a touch of contemporary style, especially noticeable in the traveling lifts, in which Cinderella gorgeously slices the air with her pretty feet. A dazzling swirl of quick-silver turns, her solo variation was filled with passion and airy lyricism. Here Murphy brought a special sweep to her dancing, as if Cinderella was intoxicated by her newly discovered feelings, her heart racing and her head spinning.

On opening night, the role of Prince was danced by James Whiteside. Tall and slender, he made an elegant and stylish heir to the throne. His partnering was solid and graceful. During the final act, his affection for Murphy’s Cinderella felt genuine and real. Together they made a charming couple and their final pas de deux, radiant and spirited, wonderfully ended the evening.

On Saturday night, the superb Marcelo Gomes was an ideal Prince Charming – handsome, ardent and regal. He was tenderly attentive and devoted to his Cinderella and it was an infinite pleasure to see their love story unfold before our eyes.

On opening night, Veronika Part gave a performance of refined beauty as the Fairy Godmother, dancing with a creamy ease and luminous expressivity. Among the Seasons Fairies, the lovely Skylar Brandt brought a feisty impetus and youthful zeal to the role of the Fairy Spring; and Arron Scott bounced and flounced with admirable dynamism as the Jester. The dancers of the corps de ballet, as the party guests, and the female ensemble of the stars performed with excellent flourish and enthusiasm, giving this production an extra spark. Among the secondary roles on Saturday, particular distinction goes to Sarah Lane for her superlative dancing as the Fairy Spring.

The Opera House orchestra led by Charles Barker gave an intelligent reading of Prokofiev’s score, bringing out its wistful poetry and sardonic humor. 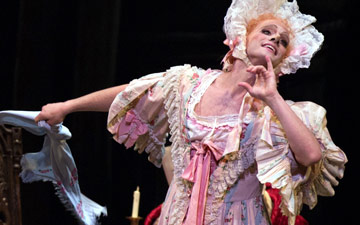 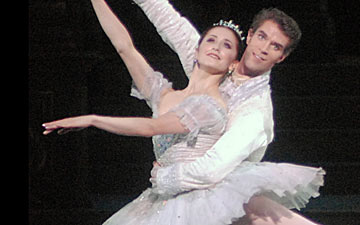 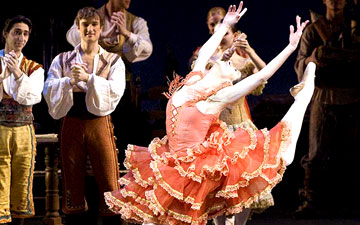