Including a low-key pilot at the Edinburgh Festival Fringe of 2012, the Flash Mob brand is now into its third iteration, and I must immediately confess to liking this show less than either of its predecessors.  The rawness and intimacy that appealed in Edinburgh has all but evaporated and the exciting notion of spontaneity – defined in the concept of the flash mob – has been replaced by a pre-packaged slickness that – to my mind, at least – backfires.  The simple truth is that it’s no longer a Flash Mob.

The fundamental problem is that this show doesn’t know what it is any longer.  It opens with an act that presents a skeletal narrative that has run its course by the interval, and then carries on in part two as a series of unrelated dance episodes.   That some of the dance content has not progressed much from the previous season is another flaw: frankly, I feel that I have already seen everything that some of these acts have to offer.

The first part is structured around a whistle-stop romance between the two halves of Alleviate (Renako McDonald and Nicolette Whitley) – the dance duo who were runners-up in Sky 1’s Got To Dance, in 2011 – beginning with their first date and ending with her under a truck.   Although what she was doing dancing on a motorway in her PJs must remain a mystery.  The use of performers’ real names throughout – the lovers’ text each other as “Ren and Nic” – casts a peculiarly surreal air over the fact that one of them “dies”.

This slender storyline makes good use of a running commentary of “thought bubbles”, text messages and tweets projected onto the backcloth, quickly taking us through all the insecurities and expectations of that first date.   Tweets are also used to integrate the group into a latter-day dancing set of sitcom “Friends” with Tommy Franzén cast as the Jack-the-lad “Joey”, getting drunk and chatting up Erin Trevena, the female half of the Irish dance duo, Brozena (also former contestants on Got to Dance).  It gave Franzén the chance to perform one of the more notable routines of the opening act: a funny “hangover” sequence of dancing while trying to get dressed (a head somersault over the bed was especially memorable).

Nic’s “death” is used to justify the flash mob when her friends decide to reconvene a year later at the Peacock Theatre in order to celebrate her life in dance, which becomes the pretext for act 2.  This idea then oddly morphs into something else when a nightclub sequence sees them playing characters drawn from a 1930s speakeasy.   Given that Nic is floating in and out of the action it all becomes a bit like Ghost meets Bugsy Malone.

All this confusion might have been OK had the dancing been slicker but sadly it was more than a little rough around the edges.  Putting it bluntly, it seemed like a show that needed more rehearsal.  Even when Flawless – usually the tightest of dance acts – came on for their first routine, there was awkwardness in the spacing and timing of the guys at the edge of the group and it seemed as if they were just getting familiar with the stage space.   A couple of the crew looked heavy-legged and stiff in the synchronised dances although they came into their own in locking and krumping routines later in the show.  And that just about sums it up: I felt that all of the acts had at least one poor routine, which was compensated by another being good.   It was like sampling a box of chocolates with unknown centres where a yucky orange cream is followed by a yummy hazelnut caramel, or vice versa.

The audience’s favourites were unsurprisingly Strictly Come Dancing’s relatively new duo (partners in life as well as onstage), Kevin Clifton (aka “Kevin from Grimsby”) and Karen Hauer, who – like Flawless – were the newcomers to the Flash Mob team.    This pair’s significant competitive and stage experience (from World Championships to Burn the Floor) gave a charismatic edge to their performances, the highlight of which was a fiery paso doble.  Like Franzén in the UK, Hauer is a former So You Think You Can Dance finalist (in the US).  Born in Venezuela, she was crowned World Mambo Champion in 2008 but despite this impeccable background, I felt that there was something more contrived than natural about her Latin flow and flair.   Having watched the fluid, rhythmic expression of ten amazing tango dancers in Sidi Larbi Cherkaoui’s M¡longa recently, it reinforced my view that there is too much exaggeration in how the Latin disciplines are codified for competition, which somehow loses the innate, intuitive beauty of the dance when performed naturally by Latin Americans.   I also felt that the female half of both other partnerships (Whitley in Alleviate, Trevena in Brozena) under-achieved in some element of the easy flow and precision that their routines required.

Television has brought a degree of fame to all of these dancers and the “Strictly” and Dancing on Ice tours demonstrate that there is considerable popular and commercial mileage in live spin-offs from their respective TV series.    Importing two charismatic Strictly Come Dancing stars into Flash Mob can only but increase its popularity quotient over and above the level that is possible from Got to Dance and the now-defunct UK franchise of SYTYCD.  And – so long as dance continues to be packaged in reality TV contests – I have no doubt that Flash Mob will continue to sell as a more diverse distant cousin to the Burn the Floor brand.  Combining different dance genres in one show is a great concept that works.  But, I’d like to see a return to the rawness, spontaneity and originality that made the earlier products so attractive.  This needs to be aligned to greater consistency, tighter dancing, more new acts and/or new material and an altogether better structure for the next model. 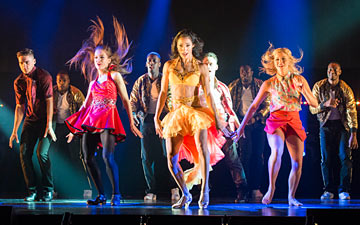 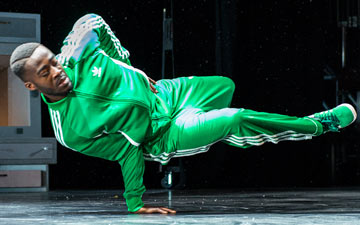