I feel that I now know what an end-of-pier seaside special looks like in Brazil. But although the raucous enthusiasm for a good time still just about shone through, this was an episode of desperately unfortunate timing. A decision to remount this smouldering 2006 show to coincide with the FIFA World Cup in Brazil probably seemed like a brilliant idea at the time and certainly not one that could possibly have foreseen the humiliating 1-7 defeat by Germany on the very night that Brasil Brasileiro opened at Sadler’s Wells. Apparently, all the 30+ Brazilian performers wanted to do was get to a TV set as soon as the show was over. But these intentions soon evaporated as the news of their nation’s 5-0 collapse inside 30 minutes filtered through from the wings. I suspect that it must have been difficult for them to carry on singing, dancing and smiling. There will have been scant consolation from the fact that the show’s co-producers, the BB Group, are based in Germany.

Although this red-carpet, celebrity-infused press show came two nights’ later it was still hard to disassociate a production based on the exuberant energy of Brazil from this failure on the football field, not least because sport was never far away from the action. The non-stop cabaret was like a dance equivalent of the Tour de France, but this tour of Brazil’s diverse cities and villages was packed into 29 stages that filled a couple of hours, which – by my reckoning – makes around 4 minutes per item, and the song-and-dance numbers certainly flew by almost as fast as German footballs past the Brazilian goalkeeper. Fourth-up was a capoeira number that started as a slow-motion martial arts contest before developing rapidly into flowing freestyle gymnastics in which each of the three “competitors” (Baianinho Capoeira, Jean Lopes and Tiago Moreno), wearing tight, white “budgie-smuggler” shorts, outdid each other in the department of acrobatic tricks.

If anything is more integral than football to the identity of Brazil then it must be samba, which is – of course – the core ingredient of this show. Although it has no obvious narrative, BB’s creator and director, Claudio Segovia, follows the evolution of samba from its origins in danced tribal rituals (Batuque, Lundu and Jongo emanating from Angola and the Congo), through its development in the afro-based neighbourhoods of Rio de Janeiro, eventually splitting off into the various tributaries and sub-specialities of samba, such as the bossa-nova.

The sea of dancing was punctuated by some occasional islands just for the singers and one mesmerising episode of solo percussion by Marcos Esguleba, parading across the front of the stage like a cross between someone’s timid elderly uncle and a tin soldier rattling out incredible rhythms with a drumstick in one hand while using the palm and five digits of the other.

I found the dancing to be far more entertaining than the singing (at least it doesn’t require translation), the vocals being led by the tall, dreadlocked, ever-smiling presence of Nelson Félix. For some bizarre and unfathomable reason (perhaps it was the height and the smile) he reminded me of the American comedian, Will Ferrell. Just as well that he amused me in some way since I cared little for any of the singing but I’m guessing that Brazilians wouldn’t have cared much for George Formby, either: the point being that some parts of a nation’s cultural identity just don’t travel well.

Sex is clearly designed to be a big part of this show’s appeal with girls in tight, nipple-enhancing tops, swirling buttock-revealing skirts or tube-tight, mini alternatives a feature of almost every dance. One poor girl revealed a little more flesh than had been intended as the material of her tight red dress rode up to her waist despite several attempts to break hold and smooth it back down again. To avoid any accusations of sexism, I might add that several men wore the most revealing and briefest of briefs. Some contemporary companies let it all hang out on the Sadler’s Wells stage and – to be honest – I prefer the honesty of that to the vulgarity of this “peek-a-boo” titillation.

Easily the best spell of dancing came in a shadowy vintage number for a veritable cast-full of Peter Lorre lookalikes led by Renato Sorriso, each appearing as if fresh from the set of Casablanca, dressed splendidly in wide-lapelled 40s-style white suits, panama hats, red-spotted ties and two-tone shoes. Elsewhere, Marcello Chocolate was a strong partner who manhandled the impressively-built structure of Sheila Aquino as if she were the lightest of rag dolls; and Ivi Mesquita, a tall dancer clearly born of Amazonian aristocracy, dominated an intriguing dance known as the Mulata Assanhada to such an extent that it was possibly a blessing that she appeared in so few other numbers. For me, the absolute stand-out performer in an ensemble designed for showing-off, was the multi-talented Verônica Bonfim, a dancer initially seen as an elegant vocalist, reminiscent of the statuesque Boney M lead singer, Liz Mitchell.

The musicians – if not the lead vocalists – were brilliant and the show is expertly paced with a momentum that builds very effectively, both at the end of act one – an exuberant carnival at the beach – and into a strong finale. Although this “opening” night may have suffered from the hangover of Brazil’s rout on the football field of Belo Horizonte, thankfully Brasil Brasileiro carries on until 27 July, allowing the samba to replace the soccer as the emblem of Brazil in the minds of those who are fortunate to experience it. 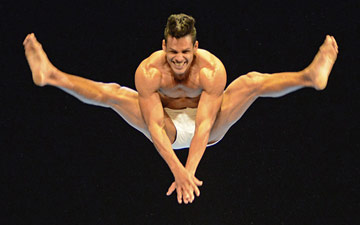