Christopher Wheeldon’s Alice’s Adventures in Wonderland is a showy affair. The lacquered, lipstick-red sets, costumes and visual subterfuge are on a par with the best of Broadway (thanks to Tony Award-winning designer Bob Crowley) and the entire operation cost a well-publicized $2m, but is it worth it?

The National Ballet of Canada’s recent residency at the Koch Theatre – as presented by the Joyce – is New York’s first exposure to the work, which made its world premiere with the Royal Ballet in 2011.

Lewis Carroll’s nonsensical narrative is tempting territory for artists. The book is brimming with anthropomorphic characters, hallucinogenic episodes, violence, wit and chaos. At this point, Carroll’s invention is mythological, and in the 20th and 21st centuries the story continues to captivate Disney, Tim Burton and countless artists and readers. The iconic, diverse characters (and their subplots) make it a tough stage proposition, and one that Wheeldon carries off, but with choreographic compromise. Wheeldon already had a over a decade of choreographic experience before tackling Alice but the movement across the course of the ballet remains fairly pedestrian and banal.

There are a few exceptions, namely the final pas de deux between the Knave of Hearts and Alice – danced Saturday by Naoya Ebe and Sonia Rodriguez, respectively – which was more complex and visually satisfying than their earlier pairings. Also in the final act, is a tongue-in-cheek parody of the Rose Adagio from Petipa’s The Sleeping Beauty starring, of course, the rose-obsessed Queen of Hearts. Performed by the razor-sharp, vitriolic Svetlana Lunkina on Saturday night, the sequence offers enough slapstick humor to entertain on the surface, while giving balletomanes a chuckle.

Wheeldon’s comic prowess also surfaces in the Pig and Pepper scene starring the Duchess, the Cook, the Fish and Frog footmen and Alice. Much like the book, the episode is packed with grotesque mayhem. The score, composed by Joby Talbot, surges with brass and percussion. The set consists of a massive chopping block and meat grinder accompanied by several giant, and very dead, hogs hovering over a bubbling cauldron. A porcine chair sits stage right like a throne, gleaming with a Koonsian, petroleum sheen. The violence and bloodiness veers into Sweeney Todd territory and the Duchess herself – performed brilliantly by a nimble Jonathan Renna – seems a nod to Sir Frederick Ashton’s campy drag stepsisters from Cinderella, down to the crinoline gown and elaborate hairdo. It drags on a touch, and could be punchier with minor edits.

The libretto, by Nicholas Wright, follows many of the book’s sequences and characters closely, but opens the work in 19th century Oxford, with a real Lewis Carroll, and finishes in present-day Oxford. It’s cutesy, but Alice is no worse for the slight revision. The real-life characters appear in Alice’s fantasy, so her totalitarian, obsessive-compulsive mother is the Queen of Hearts, Lewis Carroll is the White Rabbit, etc. And, naturally, a crowd-pleasing romantic plot line is added for Alice, which even Disney didn’t do. But it’s ok, because it means there’s more dancing.

Under the direction of legendary ballerina Karen Kain, The National Ballet of Canada has some good dancers on its hands. Corps member Francesco Gabriele Frola cuts a fine figure even in a frog suit, standing out with an elastic buoyancy, lofty leaps, chiseled form and on-target musicality. Anyone would be hard-pressed to believe that Lunkina was debuting in the role of the Queen, since she appears to be made for it. As Alice, Rodriguez is lovely, though the role deserves more dynamic choreography. One area Wheeldon could have indulged in more was with the cards, which, blessed with hypnotic color scheme and costumes, engage in a Balanchine-like frolic that would be fun to see taken to the heights of Busby Berkeley excess. 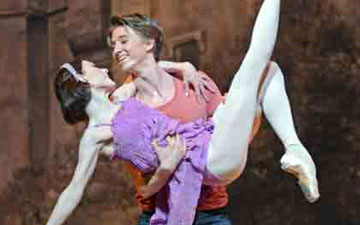 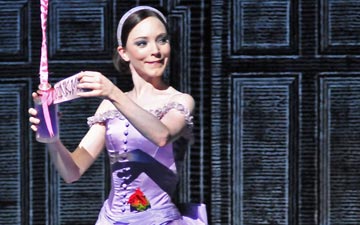 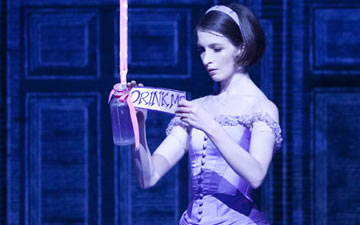