One of the novelties unveiled this fall season at American Ballet Theatre is a new staging of Raymonda Divertissements, a series of dances drawn from one of Petipa’s final ballets. When one gets rid of the plot – something about a French countess romanced by a lustful Saracen knight and saved by a pure-hearted Crusader – what remains is a series of very pretty dances to music by Alexander Glazunov. Some are classical, others more Hungarian, or “exotic” in tone. (The Crusader’s uncle is a Hungarian king. Don’t ask.) The Glazunov score, too, alternates between Hollywood-esque arabesques of sound and slow, sultry melodies in minor key.

The new staging is by Irina Kolpakova, one of the great Kirov ballerinas of the sixties and seventies (and ballet mistress at ABT). On the evidence of this first performance (Oct. 23), the company is still finding its way. On the whole, one would have wished for more rhythmic incisiveness; the piece felt as if it were being danced in a haze. There were exceptions, like a sprightly solo performed by Skylar Brandt, full of hops on pointe and beaten turning jumps. For a moment, everything snapped into focus. The lead man, James Whiteside, too, injected some much-needed sharpness and flair into his devilishly-difficult solo. As the princess, Hee Seo looked ravishing as she bourréed backwards on her expressive pointes – almost as if in a trance – but seemed to lose focus halfway through her alluring solo à l’hongroise. The seductive claps were behind the beat; the exotic flourishes showed little authority or playfulness. It’s a very exposing ballet, in a style these dancers are not particularly used to, so perhaps it will take some time before they get it under their skin.

The remaining two ballets brought the company back into more familiar territory, and it showed. Both Antony Tudor’s Jardin aux Lilas and Jerome Robbins’ Fancy Free have been in the repertory since the forties. Both play to ABT’s core strength: the ability to tell stories through dance. Both were superbly cast. Seeing them back to back, one realizes, too, how much Robbins learned from Tudor, about economy of means and the fluidity between gesture and dance. Both ballets surprise us with fleeting, un-emphatic moments pregnant with meaning.

The music in Jardin is Ernest Chausson’s brooding, Romantic Poème. Its ardent violin melody – the perfume that carries the story of these four unhappy lovers – was probingly played by ABT’s new concertmaster, Benjamin Bowman. His keening lament seemed to bind the characters together in their tragic destiny. There was no way out for any of them. Each character was keenly etched: Roman Zhurbin, the upright gentleman, haunted by regret but determined to do the right thing, and above all, to keep up appearances. Cory Stearns, the impossibly handsome, passion-filled young officer – a kind of English Vronsky.  Veronika Part, clingy and tragic, a woman on the verge of a nervous breakdown. And at the center of this storm of emotions, Devon Teuscher, limpid and understated as Caroline, the woman about to marry a man she does not love. As she limply waved goodbye to each guest, her discouragement and acceptance almost took one’s breath away.

It took the high spirits of Fancy Free to sweep away the deep Edwardian gloom. And what a trio of sailors! Marcelo Gomes was the leader of the pack; Cory Stearns the dreamy all-American boy; Herman Cornejo the feisty troublemaker. Stella Abrera showed a mix of grit and class as the no-nonsense working girl who first crosses the sailors’ path. One could almost hear Julie Kent’s thoughts in her rendition of the woman in pink who shares a tender embrace at the bar with one of the sailors. Each has made the character his own, with subtle shadings of timing and nuances of feeling. Again, tiny moments stood out, as when Kent wiped the lipstick off of Stearns’ face after a kiss that seemed to take them both by surprise. Cornejo – a little bull with rounded shoulders – threw off a series of perfect double turning jumps. Gomes flashed a wicked grin as he swiveled his posterior for the ladies. It was a hell of a performance. 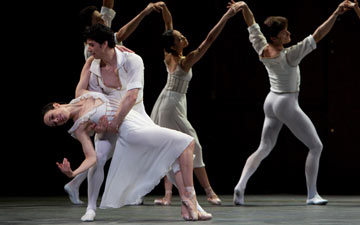