This deconstruction of the art of creating choreography sets a new benchmark for a retrospective look at an artist’s body of work. By opening up the processes of her creativity and remaking aspects of that work in association with the expansive potential of new media, Zoi Dimitriou invites us to look back at her past ideas while at the same time making something entirely new. The Chapter House succeeds in being both a “Greatest hits….” reflection on Dimitriou’s extant choreography but delivered in the context of having created something absolutely novel.

It is unusual to find complete innovation in dance performance and Dimitriou’s concept was vaguely reminiscent of Siobhan Davies’ Table of Contents, a live movement installation piece performed at the Institute of Contemporary Arts and the Arnolfini Gallery earlier this year. But, whereas Table of Contents was essentially about rekindling shared archival memories of how Davies’ work was created, The Chapter House provides a minimalist aroma of Dimitriou’s past choreography repackaged into a new and bigger idea. And it is a concept that goes well beyond dance alone, through the interaction of Dimitriou’s pared-down choreography with a live video installation created by her co-performer, Mark Coniglio, an acknowledged pioneer in the integration of dance and digital media.

Coniglio invented the Isadora software, a real-time manipulation of digital imagery that provides the controlling structural environment for The Chapter House. In the opening sections, Dimitriou’s movement is captured and communicated to an on-stage computer and then, in the concluding part, many images are simultaneously relayed through a single projector onto various media, from sheets of paper pegged on a downstage line to five large cotton sheets hung out like it was washday at a boarding house. Altogether, there must have been as many as 60 separate images being projected simultaneously through one outlet and for a non-“techy” such as me (who still thinks PowerPoint is amazing), it was a mind-blowing concept that so many images could be relayed in a single format!

This multiple projection of digital imagery appeared also to provide a metaphor for Dimitriou’s own lithe body – sensibly dressed in grey trousers and a pale smock-type blouse – as she remembered and projected snatches of five works she has made over the past eight years. Her physical performance was taken full circle as Coniglio filmed her with a tablet on an extended baton, replaying the film as part of the process of recording and re-enacting the live performance. His interaction with Dimitriou, following and filming her from different angles also meant that every performance of The Chapter House is going to be intriguingly different and each will leave behind its own legacy.

Rather than performing literal sketches from her past work – I recall seeing and reviewing both Dromi and Goddesses in Exile (both in 2008) – Dimitriou creates a flavour of them, in largely contemplative , tranquil sequences almost as if she prepares and then sets a series of interlinked tableaux. When she suddenly bursts into sections of quicker movement it is with a feline slinkiness, as smooth as it is swift, her arms and spine rippling with the undulating quality of sand slipping down a dune. Coniglio works with Dimitriou in certain set duets. At one point, he films her twice as she falls heavily to the stage but on the third occasion he helps her to stand before pushing her away when it happens again. In one memorable sequence, Coniglio’s performance capability was stretched beyond his comfort zone as both performers followed a detailed pattern of passing their hands around each other’s aura. An error in this intimate, complex set of hand/arm movements and patterns would have been forgivable for a man who is primarily a composer and digital artist and not a dancer but – to the credit of both performers – the series was completed seamlessly.

The work begins with the two walking along lines carefully marked out by Michael Mannion’s impactful lighting, eventually meeting centre stage and following a detailed choreographic process in which a bottle of water is used to wash Dimitriou’s hands before her co-performer dries the stage with a cloth. Each section is introduced by spoken text, delivered by Dimitriou standing downstage right, reading in a strange language. My initial thoughts were that this may be Greek or some Slavic tongue but this quickly changed through the realisation that each word was being pronounced with a careful individuality, not flowing as if in a complete sentence, followed by the recognition that each section of text appeared to end with the words “Red Patch”, or after further contemplation “Ret pahc” – otherwise, “Chapter” in reverse. As Dimitriou finishes each section of backwards English, she hangs the pages of text on a line and after all the text has been delivered, unpegs the pages, one by one, allowing them to fall to the floor as if this action represents her letting go of each work.

But, it is not letting go, since the closing sequence of the hour-long piece brings the spoken text back in the live projection of her words – this time with letters the right way around – beamed onto new sheets of paper that Dimitriou pegs to a moving line. I’m no technician but the precision of where each sheet was pegged must have been crucial to ensuring that each set of words appeared in the correct place and was legible. At the same time, the images filmed earlier by Coniglio were projected onto the five cotton sheets, which had been unfolded and laid out on the stage as part of the performance, while a main red image occupied the upstage backdrop.

Dimitriou is a conceptual artist and academic (she teaches at Trinity Laban where she gained her own postgraduate degree, back in 2005) for whom the exploration of contemporary artistic expression appears to be a fascinating – if not endless – journey. Until now, dance –largely interpreted through minimalist but intensely detailed dance theatre – has been her principal outlet and while movement remains at the core of The Chapter House it is now aligned to the multifarious shifting perceptions that are enabled through this intimate collaboration with the sharp-edged designs of digital media. It opens up endless potential, breathing new life and ambiguous meaning into an archive of past work, while creating a documented record of these passing moments and an ever-changing landscape for future examination.

The Chapter House creates a seamless alliance between the serious academic representation and interpretation of dance and the pure enjoyment of a theatrical performance which stimulates enquiring minds to consider the process and purpose of the art being conveyed. It is not for the easily-bored but presents a challenge that I can heartily recommend. 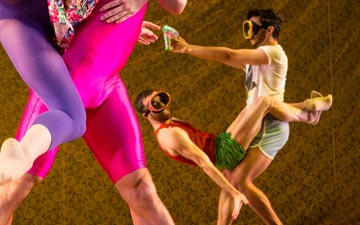 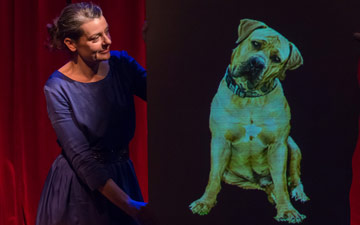 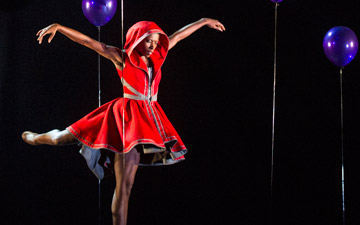