This charity gala celebrated the Royal Opera House’s performers, creators and craftspeople while raising money for the House’s enterprises from benefactors and audience members. Kevin O’Hare, director of The Royal Ballet, and Kasper Holten, director of Opera, arranged a showcase of talent from famous stars to aspiring youngsters, including children from the Chance to Dance programme, Royal Ballet School and Youth Opera Company.

Each half of the evening featured youngsters appearing for the first time on the main stage. Near the start, 10 and 11 year olds performed an adapted account of the Texan Kangaroo Rat dance from David Bintley’s ‘Still Life’ at the Penguin Café, with Alexander Campbell from the ballet company as the soloist. Additional choreography was credited to David Pickering and the Chance to Dance teachers and children. Dancers and musicians, playing Simon Jeffe’s catchy music, thoroughly enjoyed themselves.

At the end of the first half, students from the School appeared in the Grand défilé that concludes their annual matinee performance on the Opera House stage. In between came professional pas de deux (two of them world premieres), opera duets and arias. Inevitably, a few of the advertised names failed to make it. Vadim Muntagirov, due to dance the ‘Beau Gosse’ solo from Le Train Bleu, had to pull out at the last minute because of a fever.

While many of the dramatic opera arias expressed pain, remorse or evil intentions, the ballet contributions were blissful – with one exception. Two Balanchine pas de deux demonstrated the courteous harmony between a man and a woman: the adoring duet from Diamonds, performed by Marianela Nunez and Thiago Soares, and the bouncy charm of the bravura Tchaikovsky Pas de deux, danced by Natalia Osipova and Steven McRae – delicious.

Both premieres, one by Kim Brandstrup, the other by Liam Scarlett, were surely keepers, bound to be seen again. Brandstrup’s pas de deux for Laura Morera and Federico Bonelli was set to an aria from Purcell’s The Fairy Queen, sung by soprano Lauren Fagan from the Jette Parker Young Artists scheme. The Act II aria, ‘See, even Night herself is here’, describes Oberon casting a spell over the forest, sending Titania to sleep on midsummer night. Elegantly costumed, Bonelli seemed Morera’s sympathetic, slightly sinister shadow, spinning and suspending her on the vocal music to mesmerising effect.

Scarlett’s Summertime, to Gershwin’s dreamy music for the song of the same name, was danced by Melissa Hamilton and Matthew Golding in minimal outfits, their bodies lit in a golden glow. They luxuriated in their proximity, their attraction for each other evident in the warmth of a summer’s day without indulging in indecorous groping. Unlike Wayne McGregor’s Qualia duet to Robin Rimbaud’s rackety soundscore.

What seemed a radical take on the conventional pas de deux in 2003 (though William Forsythe had been there before) now looks predictable. Edward Watson, who created the role of hyper-supple male partner, manhandled long-limbed Olivia Cowley in a kind of physical delirium. He splayed and upended her while she threatened him with rapier legs and spinal contortions. Their relationship had no context, no recognisable emotions until he suddenly cradled her at the finish, after splitting his legs in a 180 degree arabesque. Spectacular and meaningless.

Just how telling ballet can be was revealed in the dream sequence pas de deux from the musical Carousel, choreographed by Kenneth MacMillan for the National Theatre production shortly before he died in 1992. In the ballet, a tomboy girl, Louise, falls for a young ruffian, as her mother did for her roustabout father: the allure of sex and potential violence is encoded in the choreography, as in the musical’s plot. Yet Richard Rodgers’s music for the wordless sequence swells with the promise of young love.

MacMillan had difficulty casting dancers for the roles until he found Bonnie Moore and Stanislav Tchassov. For the gala, the Royal Ballet provided a luxury cast in Sarah Lamb and Carlos Acosta, even finer than the original pair. Lamb conjured up the girl’s initial defiance and innocence, and the ecstasy of first love. She literally fell into Acosta’s arms, surrendering herself recklessly. Acosta partnered her masterfully, exuding the threat of danger while flinging himself into the air as exuberantly as ever. The poignancy of Carousel’s troubling plot was summed up in the duet, which can stand on its own as an evocation of yet-to-be fulfilled desire.

Ballet fared better than opera in the gala, not least because the ballet company is resident in the House. The corps danced the pack of cards number from Christopher Wheeldon’s Alice’s Adventures in Wonderland, while the opera chorus did not appear. Bryn Terfel was formidable as Verdi’s Iago and nicely naughty in a duet from L’Elisir d’amore with Sonya Yoncheva. Toby Spence sang Lensky’s melancholy pre-duel aria from Tchaikovsky’s Eugene Onegin and the Pearl Fishers’ duet with Samuel Dale Johnson, another Jette Parker Young Artist. The Youth Opera Company, all under 13, were encumbered with a gloomy commission from Charlotte Bray, spelling doom unless acorns grew amid the rubble. Terrible libretto, well sung, but the Chance to Dance ratlets had a lot more fun. 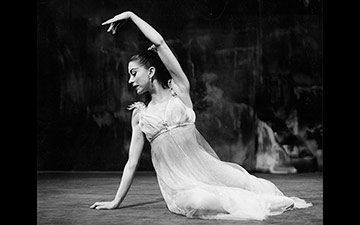