The Royal Ballet (RB) did themselves a lot of good with the last new bill of the season – a one-off celebration of Margot Fonteyn. A ballerina of legendary repute who helped forge RB’s international reputation every bit as much as Ninette de Valois (as director) and Frederick Ashton (as choreographer), she made classical ballet relevant and meaningful to the entire nation – not by dumbing it down, but by performing it with clarity, conviction and great musicality. And at an age when many would retire she became known for her celebrated partnership with Rudolf Nureyev and they both showed ballet as the pinnacle of dramatic partnership rather than individual excellence with the male dancer being there to rather discreetly show off his ballerina. It swept ballet forward and to this day no other partnership has really had such impact.

In celebrating a company legend director Kevin O’Hare centred it on the current company (with a couple of exceptions) – this was no gala event with stars jetting in to give the ‘usual’ selection of diverts. As such it was a celebration of interesting company works, from the 1930’s, going through to the 1960’s – with the majority of ballets by Ashton. There was much to be reminded of and be proud of.

Rather than jump straight into the excerpts we got Fokine’s Firebird, conveniently decoupled from the last RB triple bill of the season. Fonteyn may have got her dancing shoes on it first in 1954, but it’s a powerful role for any ballerina and Itziar Mendizabal gave her a strong sense of cool aloofness. Ivan was Nehemiah Kish, who is leaving the company (this summer) at just the time he has really got to grips with the dramatic nature of so many roles. He brought nobility to Ivan, a role that often seems rather wet and not so technically demanding. But the biggest stars of the show are Stravinsky’s score and Natalia Goncharova’s designs – the entry of the creatures/monsters/tribe and the Immortal Kostchei still counts as one of the most thrilling and strange things you will see on a ballet stage and the final picture-perfect wedding tableau, slowly built up, one of the most enticingly odd.

There were 11 ballet diverts that ducked and dived around Fonteyn’s career rather than looking to follow it chronologically. It started with the Rose Adage from The Sleeping Beauty – the ballet that made the company’s name in the USA after the Second World War – led out by a radiant Marianela Nunez, the current RB Queen Bee for such classical work. We also got the Le Corsaire pas de deux from Yasmine Naghdi and Vadim Muntagirov, both delivering old-school elegance if not the sense of thrilling bravura that Nureyev and Fonteyn could conjure. Mayara Magri, another rising star, made a bold workmanlike attempt at Sylvia’s variation with 8 attendants from act 1 of the ballet. But Francesca Hayward’s Ondine (with Edward Watson) was beautifully playful and rather voluptuous in the Shadow Dance. Even in the shortest fragment from a full evening work, Hayward can make you believe.

Natalia Osipova and David Hallberg, her guesting partner in the company’s latest run of Romeo and Juliet, danced (wait for it…) the balcony pas de deux from R&J. She’s brought totally OTT conviction to her Juliet – every last bit of its exuberance believable. The latest performances have been a real revelation. The excerpt also worked well for Hallberg who could concentrate purely on Osipova rather than the vague camp feeling that seemed to pervade his fuller performance. Osipova might be a Russian outsider (in RB terms) but the thrill and passion she brings to her roles more than hints at what made Fonteyn so legendary. We are lucky to have her.

Anna Rose O’Sullivan, dancing with Alexander Campbell in Daphnis and Chloe, made a strong impression, the more so for standing in at the last moment for Laura Morera. Fonteyn made it look like she possessed the perfectly proportioned ballet body, with all in harmony, and so it is with O’Sullivan – there isn’t an ugly bone in her body, or movement thereof – no wonder Campbell was besotted. In contrast was the pert stiffness of Birthday Offering where the best of two excerpts came from Sarah Lamb and Ryoichi Hirano with Lamb easily despatching the technical rigours while looking uber cool with the pilar of quiet strength that is Hirano.

Of the work from the 1930’s and 40’s Romany Pajdak’s rendition of a solo from The Wise Virgins was lyrical and expressive and the evening closed out with the Ballroom Scene from Apparitions. Led out by a smooth pairing of Lauren Cuthbertson and Matthew Ball, this involved many more dancers from the company in the celebration and the giddy dancing had a lot in common with Ashton’s later La valse. The way Ashton can fill a stage with a swirling kaleidoscope of ballgowns still looks fantastically right, as does all the clever patterning and weaving of dancers.

But the surprise of the night came a little earlier as Darcey Bussell came out of retirement to dance the Debutant in Facade to Gary Avis’ lecherous Dago – not a term you would use today. It was a role danced by Fonteyn at her 60th Birthday gala, if incompletely with an older Robert Helpmann. At 50 Bussell still looked the business as the not-awfully-knowing girl and Avis a brilliant and all-too-knowing man keen to impress and get his hands all over. From 1931 and with William Walton music, it links the earliest days of British ballet to today and reminds us all that we might get old but we can still have fun and celebrate great dance and dancers of all ages. A well deserved bravo to all. 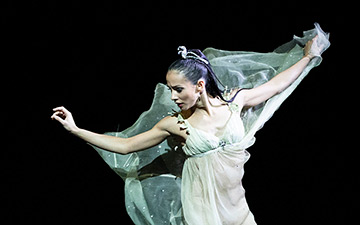 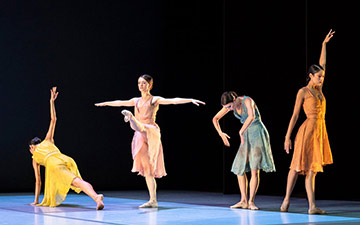