For all the Nutcracker‘s hold on the dance loving public at Christmas we don’t actually see very many new productions, so cause for celebration that Scottish Ballet just gave a premiere of the quintessential Christmas ballet and in terrific designs by Lez Brotherston, too. Although all is new to many of us, it’s not actually a brand new version but a resurrecting of the company’s first Nutcracker (from the 1970s), made by founding director Peter Darrell. Current director Christopher Hampson certainly wants to move the art forward with new commissions (like the just-announced bold move of commissioning David Dawson to create a new Swan Lake) but he also wants to ensure that Darrell’s unique choreographic voice is not lost by the company he gave life to.

And, whoopee, what a Nutcracker Scottish Ballet now have – focused on the joy of children, the delight of dance and the wonder of magic and great design. What I like particularly is Darrell’s simplicity in staying with the basic ingredients of the story and not trying to embellish anything with psychological darkness or particularly knowing grown-up references. It has innocence, and in a complex world that really is a great place to be. Darrell’s steps also have a simple musical fluidity to them rather than what can seem stiff bravura. I also love it that he sometimes cuts clean across the music, ending the dance before Tchaikovsky and throwing even more emphasis on each. Darrell has theatrical flair.

Like Birmingham’s production, it’s not a princely Nutcracker and is even more homely, set in a large house owned by a kindly Colonel. The emphasis is on natural interactions, and having a great party, with the children doing more dancing than in many productions. And the row between Clara and her brother, Fritz, is played out with much more tugging and spirit than the play-acting normally seen. Act 1 also introduces the 3 main dancers associated with Act 2 (Nutcracker Prince, Sugar Plum Fairy and Snow Queen), as entertainers drafted in by Drosselmeyer. And that happily means you get to see more of the lead principals in a ballet so often renowned for not showing its leads doing much until the end. The only odd thing about Act 1 is that there is no attempt at a transformation scene. It’s the first thing one thinks of in a Nutcracker and it’s like Darrell went “Meh – let the others try and out-do one another with elaborate changes – I’m going to concentrate on the real story rather than mechanics.”

The original designer of Darrell’s Nutcracker was Philip Prowse and the brief to Lez Brotherston was to re-imagine them 40 years on and to be faithful to what Darrell wanted. He’s done a splendid job, and Prowse’s colourways are still to be seen – particularly his use of inky blacks, turquoise and gold – they are at once traditional and yet have a jolting twist. I just love the realistic masks used by the Soldiers and fighting King Rat and mouse attendants. The second act (Sweets) is all about colour and it all takes place in a grotto of shiny baubles – stunning in their own right but they don’t compete with the equally colourful costumes for the various national dances. Unusually the English dance is included with a solo dancer dressed in sailor’s uniform. National dances often implies stereotypes but all the dances have an unusually fresh perspective one way or another – more of Darrell’s theatricality spilling out.

The opening night cast had some last-minute changes which saw Erik Cavallari stand in for an injured Christopher Harrison, with Sophie Martin (Sugar Plum) and Eve Mutso (Snow Queen). Cavallari is a good classical act but here a combination of new shoes, new floor to dance on, and not being ideally sized to partner Mutso made for tentative dancing. But pleasingly it all came together with Sophie Martin in the big pdd. Martin and Mutso are at the top of their game – stunning dancing from each, and also many roles for the wider company to sparkle and grow in. Also strong was Owen Thorne’s Drosselmeyer – strongly theatrical and in this production it is Drosselmeyer who has the final say, casting an emphatic spell over all of us – what Darrell wanted but on steroids and the best Nutcracker ending of any I’ve seen. A wise move to bring it back to charm and dazzle a new generation. 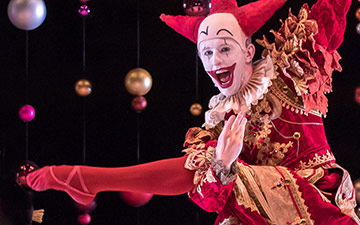