Critics are a picky, skeptic bunch.  More often than not, five seconds after the curtain is up, the list of flaws piles up: shabby sets, bad costumes, mediocre technique, sluggish timing, etc.  Envision the exact opposite of that— nothing but a long list of compliments (‘perfect fifths!’) followed by exclamation points—and you have what it is like to watch artists from the Royal Danish Ballet in all their technical glory and warmth.

Visiting New York in miniature form, Royal Danish Ballet: Principals and Soloists (thirteen performers in all), opened at the Joyce Theater Tuesday night to a packed house and roaring applause.  It is for many, myself included, a rare chance to see so much work by August Bournonville all in one place, performed by the authorities.  After the Paris Opera Ballet and the Mariinsky Ballet, the Royal Danish Ballet is the third oldest ballet troupe in the world, a fact that is repeated time and again for good reason.  In a world that grows more fractured daily, RDB offers an opportunity to see an art form passed down for nearly 200 years virtually unchanged, to see ballet as it was in the 19th century, after the French adapted it and before it evolved yet again in Russia.  To watch Bournonville is to see images of Marie Taglioni or Carlotta Grisi lifted straight from a lithograph, complete with the sloping shoulders, the torso tipping from the waist and the demure demeanor.  As for the men, Bournonville gave them stuff to do, frequently making dances for men and women to move in tandem, rather than the waist-gripping poses we all know so well.  The rhythm too is different, utilizing downward accents while remaining bewitchingly buoyant.

Bournonville also means petit allegro, and lots of it, and it was in full force with the opening piece, the pas de sept from A Folk Tale.  Brise, assemble, jete and lots of coupe make their introduction here, and the fleet-footed jumps will be seen almost continually throughout the night.  It took the dancers a minute or two to adjust to the micro stage at the Joyce, but once they did they seemed to relax.  With a knowing coyness and fluttering eyelashes, Femke Slot proved the Kitri of the bunch.

Donning pastoral pink, green and white peasant costumes, Ida Praetorius and Andreas Kaas make a fetching and believable couple in the pas de deux from The Flower Festival in Genzano.  Set in the warm and saucy climes of Italy, Flower Festival lends overt flirtation to be directly incorporated into the choreography.  Kaas—whose mane is of the well-fluffed Hugh Grant variety—introduces himself with springy, gargantuan sissones, and chases Praetorius across the stage in complex partnering moves.  He kisses and whispers into the nape of her neck; she smiles, turns, runs away but shows some leg.  Both engage the audience with their eyes, directly, unabashedly.  Praetorius’ jumps are but a whisper, akin to something out of Giselle but without the Sylvan sadness.

Unlike the formality of most pas de deux—giving each dancer solos, with their partners offstage—Bournonville keeps the couple onstage throughout, reinforcing the sincerity of the courtship through subtle miming and smiles.  It could be cloying, but it isn’t.  If you’ve ever been a teenager in love (or felt like one), you get it.  Flower Festival is the absolute essence of a first big, heart-racing crush, sans the star-crossed melodrama of Romeo and Juliet.

The wild card of the night went to Jockey Dance, an excerpt taken out of From Siberia to Moscow, Bournonville’s final ballet, created in 1876 and last performed in full in 1904.  To quote the program notes, “To find a jockey dance in a ballet taking place in Russia may be a little confusing.”  Essentially, Jockey Dance was taken from a ballet that had a variety of nations represented, and it was meant to celebrate the perennially horsey English.  On Tuesday night the brief, captivating and humorous number had Sebastian Haynes and Marcin Kupinski neck and neck, galloping across the stage in a cheeky chase, bounding high and smacking each other with their riding crops.  A novelty in the true sense of the word, Jockey Dance is an absolute delight.  The other pleasant, but very different, oddity was Conservatoire, a pas de trois reminiscent of Degas paintings, all soft grey light, tutus, black ribbons at the neck and creamy decolletage.

The second act of La Sylphide closed the first half of the program, ending with roaring accolades for Sorella Englund, who was a chilling mime queen as Madge the witch.  As James, Ulrik Birkkjaer was passionate and full of feeling, but his footwork was masked a bit by dark green socks and black slippers.   Gudrun Bojesen shimmered as the Sylph.  Through her shivering arms you hear the faint, tissuey sound of her wings fall, and feel her heart break.  There is something mercurial about how the Danes train the female epaulement, and it is all here.  Despite not even a scrap of scenery, not even a twig, the Joyce was utterly transported to the mystical, magical realm where young, thwarted love dies hard in the woods and a witch triumphs.

The program ends on a more uplifting note, closing with the third act from Napoli, returning once more to Bournonville’s interpretation of vibrant Italian life.  The Richard Simmons workout of ballet, Napoli is a zippy, skirt swishing cardio jam with some of the best footwork and epaulement you’ve (n)ever seen.  The technical proficiency is eye-popping: these are steps that are not performed in these combinations, in this way, hardly at all anymore.  Grand plies in the middle of a high jump sequence?  Sissones that slice space?  Silent pas de chats?  More perfect fifths?  But RDB are more than technicians, they are artists.

Diana Cuni, whose combre back is the purest and gooiest fondue, is a vivacious, flirtatious pro, proving herself the real veteran of the bunch, and a tantalizing partner to Kaas, who is again amiable and impeccable.  Gregory Dean shows a sass and virility that belies his stoic, stately stature.  All the dancers take a pointed interest in each other and the audience: they are not lost in the worlds of individual stardom.  The flirtation and teasing is as real as anything out of a dance club or a high school dance.  At 173 years old, Napoli, in the hands of the Danes, is far from a musty museum piece gathering dust under glass.  Bournonville believed in the “joy” of dance, and it is a thrill to see his credo kept so merrily alive. 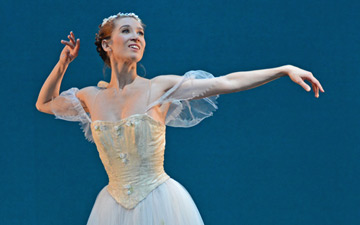 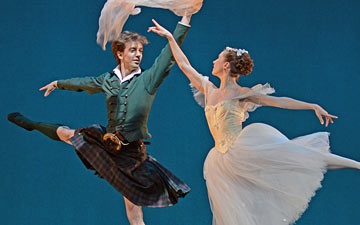 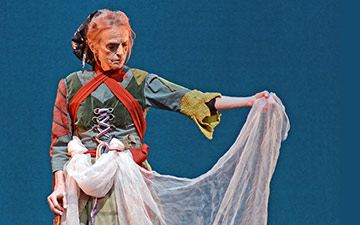 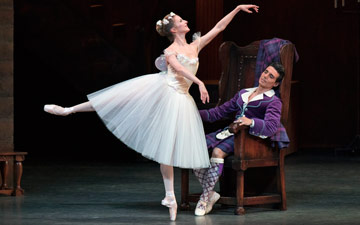 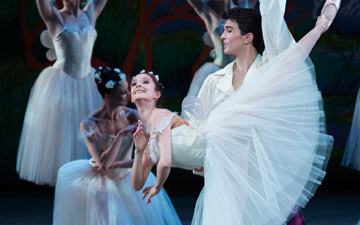