The latest creation by Boris Eifman continues two themes from his last full-scale work, Rodin (which was shown at the London Coliseum, last April). Firstly, there is a geographical move away from the Russian subjects that characterised Eifman’s earlier repertoire (such as Tchaikovsky, The Seagull – both works that he plans to revisit, next year – Anna Karenina and Onegin). Rodin is a biopic in dance with a French fin de siècle feel; and Up & Down takes his dancers into the American jazz age of the roaring twenties.

And then there is a continuing emphasis on psychological expressionism, linking the asylum scenes associated with Rodin’s muse and mistress, Camille Claudel, to the opening scene of Up & Down, set in a psychiatric clinic where the patients suffer from such conditions as obsessive compulsion, suicidal tendency and exhibitionism. The rollercoaster of unrequited love also features heavily in both ballets.

British audiences remain largely unfamiliar with Eifman’s work. His company (one of the largest non-classical ballet companies in the world, if not the largest) tours extensively – a 32-venue tour of Canada and the USA is imminent – but its rare forays to the UK have been restricted to isolated London-only seasons in recent years.

Eifman’s choreography is delivered in expansive, gymnastic dance with a strong emphasis on musicality and expressiveness through passionate and dramatic body language. One might bracket his style alongside that of Kenneth MacMillan: not solely due to his fascination with psychological subjects, but also for the remarkable athleticism required of his dancers, especially in his ever-inventive range of lifts. But, in terms of his sense of theatre and strong emphasis on visual spectacle, there is also a striking similarity to the creative world of Matthew Bourne.

The Up & Down of the title concerns the rise and fall of an ambitious young psychiatrist who falls in love with – and marries – a patient whose mental breakdown derives from an incestuous relationship with her rich father. As the wife gains strength from treatment, so the husband gradually succumbs to the avarice of a luxurious lifestyle funded by his father-in-law’s “guilt” money. Both partners embark on affairs and the psychiatrist’s descent through ever-decreasing circles of alcoholism and corruption leads to his committal as a paranoid patient in his own clinic. These elements have striking similarities to themes in F Scott Fitzgerald’s final novel, Tender is the Night, but while this may have been an early inspiration for a plot that revolves around the “see-saw” of power and control in personal relationships, Eifman has placed these events into a generic morality tale set within the darker side of the jazz age.

Eifman’s new work bears four distinguishing features. The first lies in the clarity of his story-telling. I sat next to an Australian couple, on holiday in St. Petersburg, neither of whom had any idea about the subject matter or any prior knowledge of the novel that inspired Eifman to make this work. Yet both had no difficulty in understanding the story in all its detail without the aid of any synopsis and – to me – this summarises the major reason for Eifman’s global appeal. Here is a consummate story-teller capable of presenting narratives in dance and body language alone that have the universal distinction of being easily understood.

Secondly, the colourful simplicity of design conveys a clear sense of period and place. Zinovy Margolin’s multi-purpose designs had a stunning clarity from swirling, glitzy set backdrops that took us from midnight in Time Square to a psychedelic midday sun overlooking an LA beach. A simple rack of steps (lit in designs by Eifman himself, working with Gleb Filshtinsky) had many purposes, including typifying the raised seating at a College athletic stadium for a cleverly-choreographed basketball match. Margolin creates multiple effects with minimalist design and few props. Olga Shaishmelashvili’s costumes also brought to life an evocative sense of the roaring twenties, whether in the nightclubs, on the beach or at a Hollywood film premiere. This vibrant colour gave an adult comic-book flavour.

The third element is Eifman’s eclectic choice of music. A core of standards from George Gershwin is enveloped within opening and closing bouts of Schubert and along the way there are excerpts from the Austrian composer, Alban Berg (active in the early decades of the twentieth century). But, it is Gershwin who predominates with a memorable solo (by Oleg Gabyshev) to a solitary trumpet version of Someone To Watch Over Me, a love duet to The Man I Love, an ebullient group dance to Fascinating Rhythm; and another love duet – leading to the marriage scene that closes Act I – to the opening movement of Rhapsody in Blue.

The use of Schubert for the opening and closing scenes in the clinic works well – and it would be hard to see how jazz could have had the desired effect. Eifman’s prolific use of popular Gershwin standards across the central body of the work is not only relevant to time and place but also sustains the dramatic flow. Gershwin has attracted many choreographers before, not least George Balanchine (Who Cares?) and Derek Deane (Strictly Gershwin) and his tunes are both instantly recognisable and very danceable.

Which brings me to the fourth – and the greatest – strength. Eifman Ballet’s dancers have a sleek and athletic movement quality aligned to the strong expression of character. The corps de ballet have five big ensemble dance numbers in Up & Down (not including the dramatic dances set in the psychiatric clinic and elsewhere) and their harmonised unity is superbly drilled. The soloists define their characters with clear, broad brushstrokes. I particularly liked Igor Polyakov’s manic description of a Hollywood movie director and Maria Abashova’s sexy movie star (the psychiatrist’s elicit love interest), both part of a sub-plot in the making of a silent movie epic, Caesar and Cleopatra (with some passing similarity to the filming of The Dancing Cavalier in Singin’ in the Rain). A funny, overly melodramatic, brief black & white film – directed by Sergey Ovcharov – is shown as part of the plot line, with Dmitry Lunev as a blonde, beefcake Caesar!

It was the two principals who really took my breath away. As the psychiatrist, Oleg Gabyshev – winner of the coveted Golden Mask award for his performance as Rodin – is, again, outstanding. The last time I saw a dancer perform so many extraordinary lifts was in Rodin and he continues these ongoing feats of athleticism and strength throughout Up & Down. The “fish dive” is given a new definition as Gabyshev holds the curved body of his partner (Lyubov Andreyeva) and rolls her around in a circle from above his head to ankle height, diving like a salmon leaping down a loch from upstream. As well as having the strength of three Spartacus’s (Spartaci?), Gabyshev also possesses remarkable torsion, twisting his body like a plasticine man.

Andreyeva is a similarly pliable and elegant partner, her role developing a journey in the opposite direction to the one she took as Camille Claudel (for which she, too, was a Golden Mask nominee), here, travelling from insanity to strength and a new life at the expense of her psychiatrist-husband’s disintegration. I wondered how Eifman would manage the incestuous storyline and it is – thankfully – only implied in an upstage vignette between Andreyeva and the Stetson-wearing Jiří Jelinek as the father (he wouldn’t have looked out of place as JR Ewing’s old man at the Dallas Oil Baron’s Ball).

A fifth strength was unique to this particular performance in the gorgeous gem of the Alexandrinsky Theatre, which is the St. Petersburg performing base for Eifman Ballet. Designed by the great architect, Carlo Rossi, and opened in 1832, it occupies an imposing position on Ostrovsky Square and is, without doubt, one of the most beautiful theatres in the world, both a UNESCO World Heritage Site and a historic monument of St. Petersburg.

Eifman articulates stories clearly and comprehensively, with a populist simplicity, leaving little scope for doubt or intellectual inquiry into his interpretations. IMHO, there is no better story-telling choreographer around today. His ballets will work in France and America, just as well as they do in Russia (where Eifman is revered). It is just such a shame that he has yet to crack the UK, but perhaps the simple power and foot-tapping tunes of Up & Down will bring his excellent company one step closer to that goal. A 2016 UK tour is in the planning stages.

Note: The author travelled to St. Petersburg as a guest of Eifman Ballet 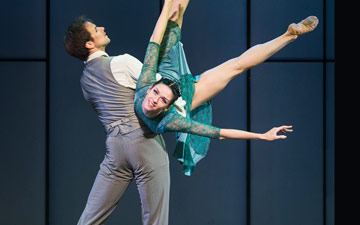 Eifman Ballet – Up & Down – London 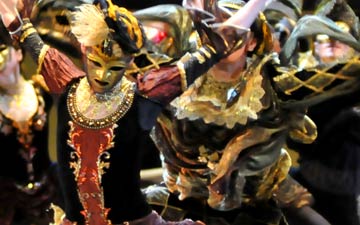