On the Wings of Love

Will she? Won’t she? After a year of extreme media exposure, the speculation around whether Misty Copeland – the only black soloist at American Ballet Theatre and one of a conspicuously small number of black ballet dancers at elite companies in the US – will be elevated to principal has reached a kind of fever pitch. Copeland has been the subject of a New Yorker profile, a memoir (Life in Motion), a Sixty Minutes segment, and, for the gym set, an online sportswear ad that was viewed by millions. One can only imagine the pressure she must feel. Copeland became a soloist at ABT in 2007 – eight years ago – so if it’s going to happen, the time is now, or at least very, very soon.

Meanwhile the company has been slowly expanding her repertoire of roles. First, she was cast in Alexei Ratmansky’s Firebird in 2012, then as Gamzatti in La Bayadère; more recently, she was Florine in Ratmansky’s new Sleeping Beauty and Odette/Odile in Swan Lake (on tour), as well as the Cowgirl in Agnes de Mille’s Rodeo. (For the record, she was a great Cowgirl.) On June 24 she will dance her first Swan Lake in New York. Tonight was her début in Kenneth MacMillan’s Romeo and Juliet, which is celebrating its thirtieth year at ABT. (It opened in London in 1965, a half-century ago.)

The million-dollar question for any dancer on the cusp is this: can they carry an evening-length story ballet? The answer, on the evidence of Copeland’s début in Romeo and Juliet, is yes. Whereas she can sometimes look constrained and tense in smaller, technically-challenging roles, where she has to prove herself in a short span of time (like Florine in Sleeping Beauty), her performance last night seemed to open up as she gradually took ownership of the role and molded it to her strengths. Her Juliet began cautiously, but ended with a sense of freedom and abandon. She was what the French call épanouie, a word that translates as something like “fully realized.”

MacMillan’s Romeo and Juliet is an actress’s ballet; its weight falls on Juliet’s shoulders. It is in many ways her story. Her will moves the action with the heedless power of a locomotive that has gone off the rails. (How many bad decisions she makes over the course of three hours! How we wish someone could save her!) If a dancer can convince us that she is Juliet, we will follow. Which is not to say she doesn’t have a lot of dancing to do. But unlike in Swan Lake, we aren’t looking for perfection of execution but for élan. The audience wants to feel what she’s feeling.

Because Juliet is such a compelling character – thank you, Shakespeare – we are easily touched by her, but it’s harder for a dancer to make the character her own, imbuing her with some aspect of herself. Misty Copeland’s Juliet already has a particular hue to it. There is something contemporary, American, almost teenager-ish about the way she stares at Romeo when they first meet, with big, round, saucer-like eyes.

But it’s in the latter stages of the story that her interpretation becomes more compelling. It’s the way she resists her parents’ instructions to behave like a lady in the presence of her suitor – an appropriately stolid Grant DeLong. Her desperation is tinged with petulance; she rounds her shoulders, digs in her heels, and tilts her head forward stubbornly. “But I don’t want to dance with him!” her whole body is telling us. When she is forced to do so, her limbs go completely limp. In her acquiescence we see a foreshadowing of her death. Paris is dancing with her corpse, just as Romeo (Aléxandre Hammoudi) does in the ballet’s harrowing final scene. On both occasions, the inert limpness of Copeland’s limbs is shocking.

But the thing I’ll remember most of Copeland’s first Juliet is her run: loping, windswept, and impetuous. Her run tells us everything we need to know about her Juliet. Other aspects of the character will likely come with time, particularly as she develops a firmer relationship with a partner. On this night, she and Hammoudi looked as if they’d had little time to rehearse together – she will perform the role with Joseph Gorak later in the week. The partnering was serviceable though at times laborious. (It improved markedly in the balcony scene.) Transcendence was not achieved. Hammoudi’s own dancing was sloppy, with un-stretched legs and feet. This was particularly noticeable given that he was dancing next to Joseph Gorak (Benvolio), who is all clean lines and impeccable execution. Craig Salstein, as Mercutio, colored his death scene with sudden changes of mood and more than a hint of madness. It was his Giselle moment, and it got a well-deserved round of applause.

Roman Zhurbin, always a compelling dancing actor, made a strong impression as Lord Capulet. In the dance of the Capulets – a tour de force of stylized brutality – he stepped heavily on his heels, a hint of a grimace lingering on his face suggesting both a violent nature and a touch of weakness. The production, even in its slightly worn, faded state, still works its charm. (My only complaint is that we see a bit too much of the harlots). The two-tier, colonnaded set by Nicholas Georgiadis, framed by two curving staircases, is both imposing and effective, allowing for hidden entrances and exits as well as picturesque, multi-level compositions.

Much of the ballet’s power can be attributed to Sergei Prokofiev’s score, with its scene-setting colors, soaring melodies, and odd instrumentation (saxophone, celesta, mandolins). At all times, Prokofiev’s music tells us what to feel: it flutters with emotion when the lovers meet, laughs when the Mercutio jeers at the Capulets, eggs on the swordsmen when the rival bands clash in the square. The closer Copeland can get to its spirit, the more her Juliet will soar. She’s well on her way. 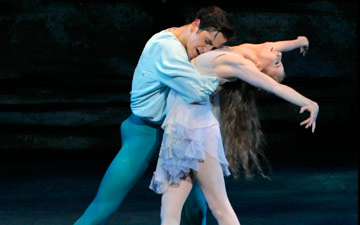