How Fares My Juliet?

The ABT season rumbles on. After the genuine excitement of the Ratmansky première (Shostakovich Trilogy) and the glorified silliness of Le Corsaire (with new, less-cartoonish sets by the Argentine designer Christian Prego), come the epic love stories: Romeo and Juliet, Swan Lake, Sleeping Beauty. (Frederick Ashton’s Rococo fantasy Sylvia, coming in two weeks, is a different story.) Once again, casting takes center stage. What combination of stars and up-and-comers guarantees maximum satisfaction? For sheer firepower, last week’s Corsaire featuring Natalia Osipova (Medora), Isabella Boylston (Gulnare), Ivan Vasiliev (Conrad), Daniil Simkin (the slave), and Herman Cornejo (Lankendem), was hard to beat. Osipova’s Medora, not the least bit cowed by enslavement, flew like a flaming arrow, barely touching the ground before rebounding once more, and rather pointedly teasing the genial pasha who purchased her in the first market scene. It’s a testament to Isabella Boylston’s new-found expansiveness – thank you, Ratmansky – that she absolutely held her own, countering Osipova’s dynamism with her own musicality and lushness of movement. Daniil Simkin dispatched Ali’s trick-filled turns and leaps with his usual super-polished technical finesse, adding a whole diagonal of five-hundred-and-forty degree leaps, a move in which the leg swings all the way around the body before landing. (We may have reached the point at which these once-gasp-inducing feats have become almost commonplace.) Herman Cornejo’s charm and warmth flowed into beautiful, if all-too-brief moments of all-out dancing that made one pine for the days when ABT boasted a major contigent of Latin American and Spanish dancers: Carreño, Corella, Julio Bocca. Sigh. In such august company, Craig Salstein upped his game in the fiery role of the traitorous pirate Birbanto. And, perhaps feeling the heat of all this combined bravura, Ivan Vasiliev gathered his strength into ever-more-space devouring jumps, soaring from one corner of the stage to the other. It didn’t make the choreography any more interesting, or the music any more memorable, but it was fun.

This week, it’s on to Kenneth MacMillan’s great romantic ballet, Romeo and Juliet. Maybe it’s Georgiadis’ monumental, brick-and-rust-colored sets, or Prokofiev’s cinematic score, or MacMillan’s masterful alternation of ensembles and passionate pas de deux, but this production is remarkably foolproof. In fact, it works almost too well; even a half-hearted performance can be quite effective. ABT has been performing the work since 1985 and it could use a little sprucing up, a little more intensity in the crowd scenes, more attack and synchronicity in the trios for Romeo and his friends. The orchestra doesn’t help; wrong notes, bleats in the horns, and soggy tempi have a way of weighing things down.

But there were lots of high points as well in the two performances I saw. On June 11, the roles of the young lovers were danced by Polina Semionova and David Hallberg. It was Semionova’s New York début in the role, which she has danced just twice before, on tour with ABT. She’s not a natural Juliet; she’s quite womanly, for starters, and lacks the skittish quality one associates with the Capulet teenager. But new opportunities seem to awaken a kind of freshness and curiosity in this surprising dancer. In her short time with the company she has begun to blossom in unexpected ways. When she arrived (as a guest) in 2011, she was all glamour and polish. Her Swan Lake was impeccable, glistening and dull. But Don Quixote revealed a sunniness and warmth that seemed to coax a new sensuality out of the normally reticent Hallberg. She was a softly glowing Terpsichore in Balanchine’s Apollo. And earlier this season danced the adagio movement of Symphony in C with a stirring legato and musical understanding. Technically, she is impressive: she seems to have no weak spots at all. Her acting is natural, relaxed. She brought all these qualities, and a dramatic intelligence, to her Juliet. No hystrionics, just a very unaffected, simple approach, quiet arms, a lovely use of the head, expressive eyes – which filled with tears more than once – and a gentle, limpid smile. I was particularly struck by two passages. First, the moment in which she is informed of the identity of the young man she has fallen in love with at the Capulet ball. A shudder went through Semionova’s body; her eyes became hollow. Then, later, when Macmillan’s choreography calls for Juliet to sit quite still, pondering her dwindling options, her face became like a movie screen. One could see her thoughts, though she did almost nothing.

Hallberg, whose lanky, boyish physique and refined technique are so suited to the role of Romeo, gave a slightly tentative performance, as if he were overthinking the role. He’s returning from a lengthy injury and it seems likely that he hasn’t quite regained his confidence in this role which asks for a certain amount of spontaneity. The corps-member Alexandre Hammoudi was scheduled to have his début at the matinée on the following day (June 12), alongside the newly-minted principal, Hee Seo. Alas, it was not to be, due to an injury (Hammoudi is out for the season). He was replaced by handsome Roberto Bolle, an old hand at the role. (The ladies behind me were very pleased.) Bolle’s Romeo is playful, a bit of a rake, a conoisseur of harlots. But there is a stiffness in his back that dulls his dancing; the energy doesn’t radiate. And his acting falls back on clichés – he does more silent screams than any dancer I’ve seen. It is in the partnering that he really comes into his own. He knows his way around a ballerina; he seems to intuit exactly where she wants to be. And because he’s so tall and strong, the mechanics simply disappear. He is more than a support – he’s a force.

Seo’s Juliet is as lovely as I remembered it from her début in 2009. She has a way of letting her feet linger between the steps, imbuing every sequence with a kind of lilting tremolo. Her bourrées blur together, like dewdrops. Every shape is achingly beautiful. Her Juliet is delicate, young, deeply vulnerable. At times, Seo seems to forget she is a ballerina, and run, shoulders rolled forward, like a little girl. Her arms go limp at Romeo’s touch. The scene in which she is forced to dance with Paris – the unwanted suitor – is especially harrowing. As he manhandles her puppet-like body, she allows us to clearly see a foreshadowing of the final scene in the Capulet crypt. She’s already dead.

A word on some of the secondary roles. Joseph Gorak, who has been quietly making his mark in roles like Lensky in Onegin and the tango solo in Mark Morris’s Drink to Me Only with Thine Eyes, once again demonstrated the eloquence and precision of his line in the role of Benvolio on June 11. If only he could shed some of his reserve. At the same performance, Daniel Mantei was a touchingly young, noble Paris, caught in an impossible position between the overbearing Capulets and a recalcitrant Juliet. One felt for him. And most of all, much praise to Roman Zhurbin, whose rendition of both Lord Capulet (June 11) and Tybalt (June 12) endowed these cardboard characters with a vivid inner life and layers of humanity one almost never sees. Watching him play Tybalt – proud, mocking, vain, but not the brutal monster he is usually depicted as – reminds us of how complex, and subtle, balletic acting can actually be, in the right hands. 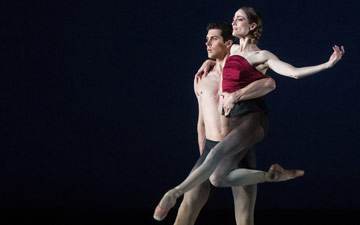 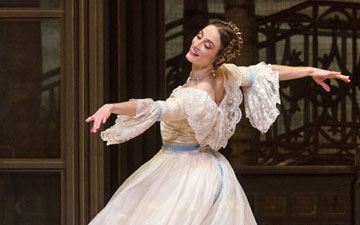