Ivan Putrov
Lodz Ballet Festival: Men in Motion
Lodz, Teatr Wielki
20 May 2015
www.putrov.com
www.operalodz.com/en
Many thanks to Elliott Franks for the pictures

It was on the morning of the British General Election in 2010 that Ivan Putrov discovered he was no longer to be a Royal Ballet dancer. While David Cameron and Nick Clegg posed for photos in the Downing Street garden, Putrov was also working out a new career strategy; and over the five-year, fixed-term course of the parliament that has followed, he has never looked back. A man in constant motion, whether helping Neil Tennant (he of Pet Shop Boys fame) to bring to fruition the concept (and score) for a ballet based on Hans Christian Anderson’s The Most Incredible Thing; starring in a new Mallorcan production of Romeo and Juliet; or fast-tracking his own entrepreneurial skills as a producer.

Putrov’s Men in Motion has already had thirteen outings both here in London (Sadler’s Wells – where it began, in 2012 – and the Coliseum) and overseas (in Moscow and various Italian venues). The dancer/producer and his MiM brand have now achieved sufficient profile to be invited to give two performances at the Łodz Ballet Festival.

The Teatr Wielki – the Grand Theatre – is a large, imposing, box-like, modernist building that dominates the fountain-laden Plac Dąbrowskiego in central Łodz (pronounced “Wutch”), Poland’s third-largest city. Opened in 1967, it is the second largest opera house in Poland, seating over 1,000, although the extensive warren of public areas is rather more auspicious than the auditorium itself. Sight lines are excellent from every vantage point. The theatre mounts a bi-annual international ballet festival, which reached its 23rd iteration in 2015.

Perhaps illustrating how far Putrov has come in such a short while, Men in Motion directly followed no less a star than Sylvie Guillem on her farewell tour (which moved from Łodz to Sadler’s Wells in the following week); and it prefaced performances by Les Ballets de Monte Carlo and the ballet company of Teatro Alla Scala (La Scala). The Festival’s line-up is big, bold company to be amongst for this itinerant “capsule” ensemble of guests, borrowed from all over Europe and assembled by Putrov for each engagement.

The most impressive (if not, incredible) thing is that his scratch company exudes the professionalism that one would expect from a tight-knit group that has lived, trained, rehearsed and performed together for seasons. Whereas, in fact, some of his team only met for the first time when assembling in Łodz, a day or two before the first performance. Putrov’s “company” also extended to include administrative, financial and stage management, lighting design, musicians (Evgeny Degtyarev and Roman Lopatinsky, who performed live for around half the production) and even their own in-house photographer!

One issue about using dancers on furlough from elsewhere is that arrangements can fall through at the last minute. Thus, Vadim Muntagirov’s scheduled appearance was thwarted due to a change in the rehearsal schedule for Afternoon of a Faun, back at The Royal Ballet; and two other heavyweight draws – Marijn Rademaker and Thiago Bordin – also appeared in the printed programme but not on the stage, meaning that almost 50% of Putrov’s intended cast didn’t make it, some withdrawing just days’ prior to the event. Nonetheless, Putrov’s pulling power is considerable and – with very little notice – he secured three superb dancers as worthy replacements.

Wherever you looked, across the doughty dozen works that comprised the latest programme, there were men worth seeing in motion, performing outstanding work. Right upfront was one of the show’s mouth-watering highlights with Christopher Marney – best known for his performances in Matthew Bourne’s choreography – appearing in his debut as the half-human/half-goat enjoying a languid, lusty afternoon in Nijinsky’s L’Après-midi d’un Faune. Casting Marney as the faune was a stroke of genius. He casts an evocative throwback to the early twentieth century of Nijinsky and Les Ballets Russes with an authentic, vintage, elfin look that seethes with a fine command of expression. One has the impression that he has researched the role in fine detail, replicating the flat, frieze-like imagery of the faune in motion and bringing a strong sense of theatre to a ten-minute masterclass that ran the full range of emotions, from sun-bathed, grape-eating indolence to that climax of an uncontrollable libido.

Marney followed this auspicious debut by returning later in the first act, to perform a role he has danced some 400 times before with the “newbie” tag switching to Putrov himself, dancing as the swan in the Act 2 adagio of Bourne’s Swan Lake. It was a double dose of crossover for Putrov since the ballet dancer had himself performed as the prince (with Edward Watson as the swan) at last year’s Tuscan Festival, La Versiliana. This pas de deux graphically encapsulated the prince’s journey from deep melancholy to happy expectation, developed through the insistent, tender courtship of the swan. It was a pas de deux taken out of context that nonetheless retained the full power of its intrigue and appeal.

A permanent feature of Men in Motion productions is to showcase extracts of the great ballets commissioned by Serge Diaghilev for Les Ballets Russes. Hot on the heels of the faune came Marian Walter’s heart-rending account of Petrushka. The doomed, lovelorn puppet’s soul only comes alive when he is alone in his room and this pitiful scene was danced with great sentimentality and feeling by Walter, a principal dancer at Staatsballet Berlin. The husband of Iana Salenko – a frequent guest artist at The Royal Ballet – Walter continues to develop into a remarkable performer with powerful technique, strong athleticism and expressive acting. His sensitive account of Ludovic Ondiviela’s Berlin – a well-crafted gem of a solo created on Walter, last year, to music by Max Richter – was a significant highlight of the second act.

Six other solos punctuated the programme. Two were bravely performed by The Royal Ballet’s Valentino Zucchetti, valiantly returning to the stage after a four-month lay-off due to injury. He chose two works in which there is no hiding place, beginning with the combined product of the two George’s, Gershwin’s Liza from Balanchine’s Who Cares?, which he danced with suitable élan; followed by a splendidly heroic and intricately detailed account of Leonid Jacobson’s brief biography of the famous French dancer, Vestris.

Rainer Krenstetter – an alumnus of The Royal Ballet School and former Prix de Lausanne winner, now a principal dancer at Miami City Ballet – danced Renato Zanella’s Barocco, which was originally made for a Spanish flamenco company, without much lasting resonance; and another late replacement, Zhani Lukaj closed the first act with Marco Goecke’s inventive, modern view of Weber’s Spectre de la Rose, made in 2009, but here shorn of the woman partner and supporting dancers. Lukaj’s otherwise fascinating account of Goecke’s interesting movement – restrained jumps and quick-fire port de bras changes – was undermined somewhat by his red costume’s refusal to moult, as it should.

This was a shame, since one assumes it was the clearing up of “rose petals” during the interval that required Spectre to close the first act, thus giving Lukaj a difficult task of “follow that” after the audience-pleasing Sinnerman, a tour de force for Daniel Proietto (created on him by Alan Lucien Øyen), dressed in a shimmering unitard that changes colour like a series of chemistry experiments, in response to Martin Flack’s brilliant lighting design. It is a ten-minute marathon for the majestic Proietto, dancing to Nina Simone’s uncut version of the eponymous song, including an inbuilt encore and curtain call, both of which inevitably ratchet up the audience’s enthusiasm. It’s a perfect calling card for Proietto and after several viewings, it never fails to ignite.

The second act opened with a MiM staple, the Proust duet by Roland Petit, danced with great athleticism and power by Krenstetter and Walter (along with Putrov, the busiest dancer of the evening), which led into another Ondiviela piece, Adagietto, newly made on Putrov. Dressed simply in dark rehearsal clothing, he performed this interpretation of Mahler’s adagio music with a dark intensity of feeling. It set the scene for a series of well-received solos that led into the evening’s second world premiere with Proietto’s own work, we two boys, a duet danced with Putrov, to close the show.

Proietto has not hitherto been known for his choreography but we two boys should start to change that. Using music by film composer Alexandre Desplat, Proietto has created an unashamedly sentimental piece that was danced with finesse and tenderness by these two outstanding artists. During the press conference that followed the opening night, an ignorant question bordering on the homophobic was asked (from the audience) about the efficacy of men dancing together and it was handled with great delicacy and diplomacy from the podium. Earlier in the evening, Putrov and Proietto had closed this show by demonstrating in the most beautiful way possible, the unique aesthetic of a sensitively constructed male duet. In the adapted language of the British parliament, perhaps they should have responded to the ignorance of the question by saying “we refer the dishonourable gentleman to the answer we gave onstage earlier”!

The Putrov machine continues to roll. Inside three years, he’s clocked up a clutch of productions that have toured to big venues in four countries. He has showcased the beauty, the power and the athleticism of the male dancer by reviving authentic pieces from ballet history and performing modern work, including new repertoire that he has commissioned. Men in Motion is great entertainment and it seems to be good business. To paraphrase a well-known Balanchine quotation (referring to Jerome Robbins choreographing to Chopin in Dances at a Gathering): “its good, its like popcorn….make more”. 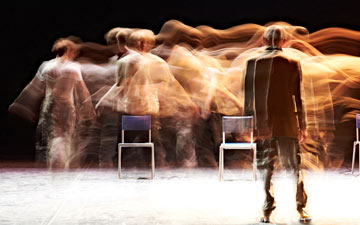