Kathak on the Hudson

Thank heavens for Summer festivals, for they remind us of the relaxed pleasure of listening to music outdoors, rendered even more pleasurable by a pretty, verdant setting. The glory of the sun slowly sinking behind a stage, the cool feeling of grass beneath our feet, it’s all part of the show. In the case of the Battery Dance Festival, which began its run at Robert F. Wagner Park in Battery Park tonight, there is the stunning backdrop of New York Harbor to behold. Sailboats drift by, airplanes streak across the sky headed toward unknown destinations. The principal inconvenience, the brightness of the late-afternoon sun, diminishes over time, and in any case one can usually find a spot with a bit of cover, or hide in the shade of another festival-goer’s head, as I did on this balmy summer evening.

Every year, the week-long Battery Dance Festival—which used to call itself the Downtown Dance Festival—includes an evening of Indian dance, co-presented by the Indo-American Arts Council. The lineup of this festival-within-the-festival (which goes by the name Erasing Borders), is always strong. Interest in Indian dance seems to be on the rise in New York. There are a few yearly festivals now, and, in a couple of weeks, Erasing Borders will present a second, indoor performance at the Schimmel Center for the Arts at Pace University, near City Hall. (Drive East, another festival of Indian music and dance, ends on the 16th.)

One of the most appealing features of the Erasing Borders Festival is its eclecticism. The organizers bring dancers representing various classical traditions from across India. (Alas, no live music, at least this year.) The current edition includes Bharata Natyam, Kathak, Mohiniyattam, the popular Bhangra, and a much rarer dance-form derived from martial arts, Chhau, from Orissa. Though many of these dances have roots in the ancient dance treaty the Natya Shastra, they differ in significant ways. Each has its own movement style, its own poses, its own musical idiom, and its own way of responding to rhythm and melody. Kathak, developed mainly in the Mughal courts of northern India, is refined and highly codified. It would appear to be the most abstract of Indian dance forms, with a clean and crystalline technique that includes fast, precise turns, silvery jumps, and harmonious poses that allow the audience to admire the dancer from all sides.

Sanjukta Wagh, a Kathak dancer and choreographer from Mumbai, performed two pieces, the first of which, “Teentala: Kathak Nritta,” was a set of variations based on a sixteen-beat theme. (The basic structure of the “teentala” rhythm was explained by the Indian dance expert Rajika Puri in the first of several informative introductions.) The increasing complexity and syncopation of the variations—the beats indicated by the feet or the fingers or a flash of the eyes—was such that a non-expert quickly lost count. Each cycle of sixteen had a different visual emphasis. In some, attention was drawn to the arms, hands, or fingers, or the quickness of the feet; in others the focus was on turns or small jumps. Unfortunately, because of the heavily amplified music, some of the thrill of the footwork was lost, though not the elegance with which Wagh sustained each pose and finished each phrase, as if to mark it indelibly in our collective memory.

A New York-based troupe, Jiva Dance, performed an ensemble dance inspired by the movement of the peacock, in the Bharata Natyam style. Instead of the long tunic typical of Kathak, the five women wore fitted tops and a dhoti-like fabric wrapped around their legs to allow for deep squats and lunges. The piece they chose was lively, its rhythmic structure reflected by the dancers’ playful use of unison and call-and-response. The choreography, though not terribly complex, used the space well, resolving itself into strong diagonal, horizontal, and vertical lines. Jiva was followed by Pallavi Krishnan, a dancer specializing in Mohiniyattam, a particularly seductive dance from Kerala, a state that lies on the south-western coast of India. Everything about Mohiniyattam is rounded and sinuous, as fluid as the waters of the canals for which Kerala is famous. Krishnan was the most decoratively costumed of all the dancers, with a large, flat bun perched on the side of her head at a coquettish angle, and a layers of gold, saffron, and green-colored fabric held in place by a gold belt. Her piece, “Cholkettu,” was slow, almost mesmerizing in its repetition. Krishnan’s body formed soft curves, bending deeply from the spine; like water, she never stopped moving.

But the highlight of the evening—in part because of its novelty— were the two dances performed by Rakesh Sai Babu, the young male dancer specializing in the much less familiar Chhau dance style, from Orissa. Chhau includes elements of folk theatre, acrobatics, and martial arts. With its bent-legged running poses and freeze-frames, it is also reminiscent of Cambodian dance-dramas. The first dance, “Dandi,” depicted a wandering ascetic, carrying a lantern in one hand and a drum on a stick in the other. The second, “Yuddha,” was a most un-warlike war dance, sinuous and almost playful. Both included impressive acrobatics: backbends, striking poses with one leg held in high attitude, turning jumps and leaps landing on one leg. Both were built upon a strongly-accented walking pattern, the dancer’s body rocking powerfully as he generously unfolded one leg and then the other. His upper and lower body worked in opposition to each other, elongating and augmenting each step. (It’s clearly a technique that requires enormous muscular control.) In the second dance, the sword in Sai Babu’s right hand extended those lines even further. During both, the dancer wore a slight, enigmatic smile, punctuating his feats with almost flirtatious shoulder shakes. It’s a most intriguing dance style that I’d like to see more of.

Then came the chaser, a rousing Bhangra performed by an all-female ensemble, Shaan Mutiyaaran Di Bhangra. Originally a folk dance from Punjab, Bhangra is now ubiquitous, from music videos to Bollywood movies to the lively college competition circuit here in the US. The music is straightforward, bouncy, preferably loud. The appeal is obvious: once the dance gets started, it’s impossible not to bounce along. It lends itself to large groups. With a little help, anyone can join in the fun. And after the official performance ended, that’s exactly what happened. 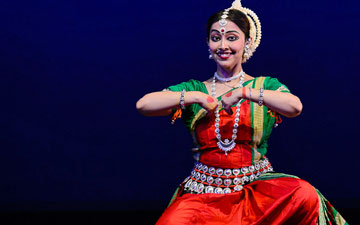 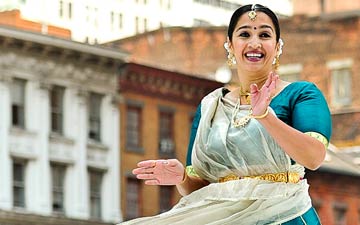