George Orwell’s 1984 is a hell of a story to tell just with dance. There are two broad threads to it – a tale of lovers and betrayal and a tale of politics, the state and mass manipulation and control. The former, ballet can handle very readily (if you know what you are doing) but the latter is not so easy to convey, especially if detail seems to matter. And so it is with Jonathan Watkins’ 1984 – the work for the lovers is very memorable and the drama played around them slightly less so. That perhaps oversimplifies things – there are some memorable aspects of a state gone off the rails and I fancy that this 1984 will last much longer then Kenneth MacMillan’s take on Orwell’s story (called Checkpoint), which largely seems to have sunk rapidly without trace.

In telling 1984 Watkins has been greatly assisted by his choice of creatives. Design and lighting-wise (Simon Daw and Chris Davey) it’s set in the period the book was written – it’s a 1948 look at the future with RAF blue clothing, hair all up and utility design. But hovering everywhere are camera screens and a huge screen at the back which can project live action (from the satellite cameras) or controlling messages from the party. Visually (Andrzej Goulding is the video designer) it’s all a very slick package and for once it’s great to see a large video actually there because it’s needed (instead of just being current choreographic fashion). The design excellence is mirrored by Alex Baranowski’s atmospheric score. Menacing, fidgety, harrowing, it also goes into freer flights of emotion for the lovers.

Tobias Batley (Winston Smith) and Martha Leebolt (Julia) are the leads and after a somewhat slow first act, where the controlled tedium of life in Oceania is largely established, it’s they who memorably close it out with their first pas de deux. It’s a magnificent thing, spanning first coy, unsure, love through to needy sex. The partnering and music steadily escalate until you are all fit to pop and… the curtain comes down and you can all catch your breath again. I wouldn’t say that any of the lovers’ movement showed a very new take on ballet love as such – it’s very MacMillanesque – but it’s put together, danced and sustained so well you have to give Watkins high marks. I was particularly impressed by Martha Leebolt, who draws you in at another level.

The last act is usefully a little shorter than the first but has more action for the lovers, their unmasking, the torture and the sadness of souls being crushed to nothing. Javier Torres does a good job of being the apparently friendly but menacing O’Brien, who turns into torturer. But I think the terror of such a scene is not fully realised even if the music seems to be on the button – the video imagery of rats etc doesn’t quite deliver the full punch to the stomach. And the movement for Members of the Party and Proles is impressively regimented (and danced), but perhaps we see too much of it and I wanted to fast-forward. But ultimately I think Watkins has delivered a good piece of mature dance theatre, pretty true to the book, and well above what his years might suggest. It’s been a long time since a choreographer from outside Northern Ballet has created a full evening ballet on the company and Watkins eye, while clearly different, has created a piece in the company style and one that I think will resonate well with both its core audience and others beyond. It’s a significant accomplishment – Watkins has really marked his card. 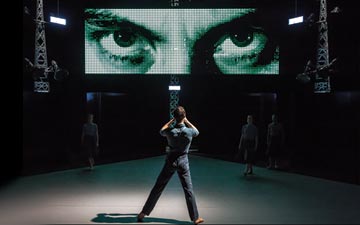 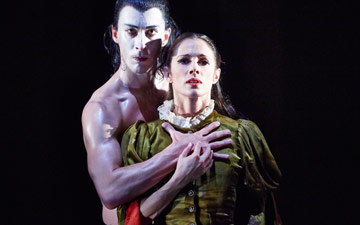