English National Ballet (ENB) are naturally proud of their Rudolf Nureyev Romeo and Juliet, a production that is also danced by Paris Opera Ballet, which Nureyev went on to direct after creating this 1977 version of the big-selling blockbuster. It’s being toured as part of this year’s 5-week ENB out-of-London tour, and although it was danced by the company just 5 years ago I haven’t spied it in over a decade and wanted to see it afresh. It makes very different choices to what is probably the best known version by Kenneth MacMillan (which Nureyev danced in), which itself is currently being performed at the Royal Opera House. To add extra zest the first performance of this revival also saw Alina Cojocaru making her debut in the production. A rare UK sighting outside London of Cojocaru, who only dances Juliet one more time: in Manchester on the 26 November.

I rather warm to the Nureyev Romeo – it’s the big gory sweep of it, with more focus on the family feuding and a cinematic approach. You get full measure with good sets and costumes (Ezio Frigerio) in keeping with 16th century Italy, the Prokofiev hasn’t been butchered to give a shortened version and it fills its time with much absorbing detail. For me it moves faster than the MacMillan version, though that might just be down to decades of familiarity making one only sharpen ones senses for the jewels in MacMillan’s telling.

It has to be said that the Nureyev has some stunning moments, particularly in the fight scene where the families, just feet apart, thrillingly rail at each other, cauldrons of boiling hate. I think it’s probably one of the most chilling moments I’ve seen in any Romeo. Elsewhere Nureyev has some delicious promenades for the corps and other characters, that weave across the stage with groups of 4 dancers doing strange little cameo repetitions – gorgeously effective. I also like that more is made of Romeo and Juliet’s mates with Romeo often seen with 6 friends – it feels more of a gang. His biggest friend, Mercutio, is particularly to the fore, which I’m undecided about: there is some reality in it, but it takes the emphasis off of Romeo at times. There are some odd choices made that don’t chime so well. No balcony for example – the one thing that everybody knows about R&J is done away with for no good reason. It doesn’t help to know that Shakespeare never mentioned a balcony: it’s become so iconic and, ultimately, right. And while overall there is much bawdry and gritty reality, some scenes just seem too unnatural. So when Juliet is discovered and thought dead after taking the potion, the entire extended family (and servants), scattered around the stage become aware in a nanosecond and instantly all grieve; there is no spreading of the word or dawning on people what has happened. And at the very end, with the lovers’ death in the crypt, the families’ realisation (as told by Shakespeare) that things should change seems poorly handled, with an entire stage of hugging dancers – all too pat, twee and overdone. But it is illustrative of Nureyev’s different emphasis – with most productions ending with the lovers dead but finally together, here it’s Nureyev with the bigger picture. The choreography for the lovers is also less special in this bigger look at Verona – it’s not so much of the star vehicle that many productions are, but a vehicle for the full company. If you want to know more about the production, and it’s worth knowing more, read Laura Cappelle’s excellent programme notes and also pay a visit to the Nureyev site – recommended reading.

Alina Cojocaru and Isaac Hernandez led out the night. Both making their debuts, as individuals they did well enough, if there seemed little chemistry. As the night progressed their tellings became more realistic, but I didn’t warm to Cojocaru’s first appearances and a particularly childish portrayal; we know she is young but this seemed way too young. Hernandez, who recently joined the company, looks a fine dancer, with wonderful elevation in jumps and soft landings, if I’m not fully sure yet about his dramatic qualities. Not so Cesar Corrales’ Mercutio who was a complete scene stealer – almost like a jester character, coming to the fore all the time. A very charismatic performance, much loved by the audience, but perhaps not for everybody. But for a masterclass in dance acting you have to see James Streeter’s Tybalt – as rabid in hatred as they come. I was also very impressed by Max Westwell’s Paris – not a dork, he is dignified and very real. Beautifully measured in his movement and dramatically, I’d like to see his Romeo.

With many extras Romeo and Juliet is a big production to take out on the road, but I’m glad that ENB are out there with such a distinctive and colourful version. And I hope they put it on in London again before too long. It’s such an absorbing counterpoint to MacMillan’s version, if that does have the benefit of a balcony that perhaps shouldn’t be… 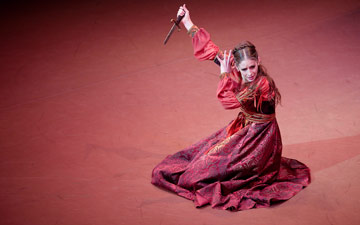 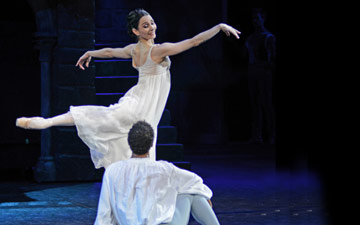 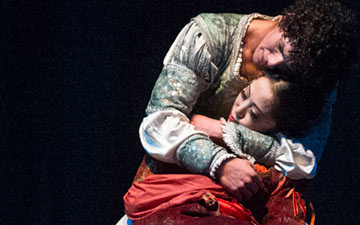 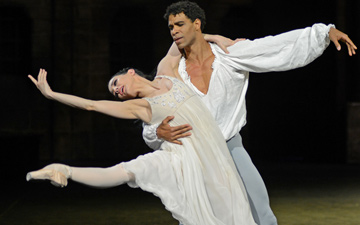