‘In girum imus nocte ecce et consumimur igni’ is the surtitle displayed over the scene of weary, white-clad cleaners, vacuuming and scrubbing a red carpet in what appears to be a hotel lobby, that greets us as we enter the Sadler’s Wells auditorium for La Veronal’s Voronia. It’s the so-called devil’s verse, a Latin riddle in the form of a palindrome (‘we wander in the night and are consumed by fire’) – just the first example of a blizzard of references in the Spanish company’s latest challenging work.

Artistic director Marcos Morau likes to take geographical locations as the starting points for his artistic explorations (the company made its UK debut at Dance Umbrella last year with Siena). The name of this meditation on the nature of evil is a nod to the deepest-known cave on Earth, the Krubera Voronya in the Western Caucasus.

And Voronia does indeed feel like a vertiginous plunge into a rather terrifying space. If Matthew Barney created a dance work, with some input from Luis Bunuel, it might look something like this. A series of increasingly strange scenes are woven together by the Spanish company’s highly distinctive dance language, a demanding, agitated mix of contemporary moves and what resembles street-dance locking, which makes these superb dancers look as though they are undergoing a Gregor Samsa-like insect metamorphosis.

A back curtain parts to reveal unnerving tableaux. An operating theatre, soundtracked with asylum noises and baby’s screams, which the dancers politely applaud, their clapping then turning subtly into hip slapping that sounds like bug-like clicks. A Messiah-like boy trapped in a glass vitrine in an unnerving take on a Damien Hirst installation. A gorilla on a mortuary slab (or is it an oven?) sits up and accepts a hug.

Imposing lift doors disgorge an elaborately dressed banqueting table that then forms the centrepiece of a twisted Last Supper (Voronia is crammed with religious figures and allusions, from the Biblical references scrolling as surtitles, to slow-paced, robed monks, to the priest, Orthodox Jew and imam who arrive after the banquet and try to drain the dregs of the wine glasses). One dinner party guest rails long and loudly at the others in what could be Korean, tries to escape, but finds increasingly odd things lurking in the lift every time she calls it: a figure in riot gear, naked people flailing in a dynamic Rodin frieze; the Messiah boy being measured for a suit… Then one dinner guest quietly turns into a polar bear.

What does all this mean? Beats me. But the prevailing atmosphere, helped by swelling electronica and blasts of choral music and sustained impressively over 75 minutes, is of a sort of Lynchian horror. It’s hypnotically strange but because it’s presented with a detached, ritualistic calm, and such commitment on the part of the dancers, Voronia’s descent into the depths seems to emphasise the idea of the banality of evil. 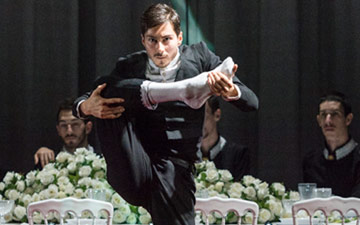