We all reminisce about the good old days; but, if you’re old enough, you may actually remember The Good Old Days. This popular BBC TV show recreated the sights and sounds of Victorian music hall and was notable for the florid articulacy of the tail-coated compere, Leonard Sachs, who introduced every one of the show’s two thousand acts, over thirty years.   Sachs died in 1990 but his stentorian tones would have been perfect to announce this performance.   I can just imagine the eloquent master of ceremonies concluding a typically long and exciting build-up with “Ladies and Gentlemen, for your pleasure and delectation, I give you the beguiling, bewildering, barmy brilliance of Miss Lea Anderson….”, before bringing his hammer down on the gavel with a mighty swipe!

Such a Sachs’ fanfare would not have been misplaced since Anderson’s Ladies & Gentlemen is a tantalising celebration of so many talents, not least the conceptual genius of Anderson herself. Since the closure of her former companies –The Cholmondeleys (pronounced “Chumleys”) and The Featherstonehaughs (“Fanshaws”) – enforced by funding cuts, at the end of 2011, her work has been sadly missing from mainstream dance theatre. The last such choreography was her visually stunning Miniatures for Candoco in 2013.   She’s still been busy, however, primarily making work for students, with commissions for Laban, Northern School of Contemporary Dance, the University of California, Shoreditch Youth Dance and London Studio Centre.

This year seems to represent something of a welcome renaissance for this most British choreographer (the aforementioned Miniatures solo was styled in the manner of an exaggerated, orange-haired Elizabeth I). Anderson’s commission for this year’s Laban graduation show was a lime green sci-fi homage to Flick Colby, the late choreographer of the Pan’s People dance troupe, a concept lately expanded into The Pan’s People Papers, a digital dance project for South East Dance.   And now London gets to welcome Anderson’s hour-long crazy reverence to the forgotten art of the music hall, first performed in Cardiff last year.

Ladies & Gentlemen is above all else a fantastic visual spectacle in which design, text, choreography and music sit in such close harmony that the whole experience is both intriguing and uplifting from beginning to end. It is as if Anderson (as director, rather than choreographer) and her designer, Tim Spooner, have mined a direct link back to the mind of Edward Lear, the studio of the eccentric, fictional inventor, Professor Theophilus Branestawm and the Wonderland imagery of Lewis Carroll.   Anderson has worked closely with Steve Blake for almost 30 years and his words and music are integral to the show’s success, not least because of their disciplined indiscipline. In fact the apparently random improvisations throughout the show must have been minutely scripted to enable such close coordination of the onstage chaos. It’s very clever.

Armed with an array of crazy props, a fading music hall family try to keep their largely forgotten routines alive.   There is The Man and The Woman – it’s hard not to see them as mother and father, a pair introduced as the “terrible, tantalising twins”, a “pitiful pet” and the “o-mazing….The Other One”, a girl with her torso encased in a box, wearing a bow tie for a moustache. This latter role represented the only change from the original Welsh cast with Makiko Aoyama stepping in for Lauren Lee-Jones.

These oddly-assorted survivors of the faded variety of music hall wore bizarre and surreal costumes and mixed music, song, comedy and tricks that invariably fail to work with punch lines that they could barely recall. A shadow puppet show is performed by The Woman (Belinda Neave) without shadows; there is a surreal ventriloquist’s act with a dummy that is merely a pair of big lips and teeth (apparently called “Gobby”) and an elaborate kaleidoscopic group juggling act without any actual juggling. Perhaps the best trick of all was a talking dog, with Bert Van Gorp getting a good share of the show’s outstanding comedic value. Each sequence ends with the performers wandering around the stage, shifting props and talking inaudibly to themselves, concluding with a group acclamation of “….And now” before the next act begins!

Various musical instruments are played by the ensemble including a miniature piano and a ukulele by The Man (Gareth Clark) and a flute and miniature piano accordion by the twins (Marega Palser and Carline Sabin).   The show’s success is enhanced by a very comfortable and slick rapport amongst the cast and it wasn’t surprising to discover that Clark and Palser have been performing together – as a double act – since 2001.   Clark’s rudimentary rhyming songs, accompanying his ukulele playing and the most hilarious facial expressions (exaggerated by having a moustache for eyebrows) provided one of many laugh-out-loud highlights, especially as he always paused to search for the last (obvious) word of the rhyme before the audience cottoned on and helped him out!

Anderson’s choreography is tightly knit around the cluttered stage full of props, sometimes moving the six performers in apparently random ways but so precisely as if they are wheeling on their own individual rails on some unseen track; and at other times in close unison. The attention to detail is always strong – as the Woman, for example, Neave mostly stands in first position and steps forward in fifth though no-one else does – but it’s the overall structure of the movement, so finely tuned but apparently loose, that provides the perfect match for the contributions of Blake and Spooner, that makes this show so consistently absorbing.

A strange miniature world appeared to underpin proceedings with a range of artefacts which, though moved from place-to-place, were mostly never used in the music hall acts. My favourite was a tiny tassel stand complete with tassel! I can recall Anderson choreographing an installation work – around five years’ ago – that took place all over The Royal Festival Hall, with a group of dancers wearing enormous wobbly conical hats, and the hats were back, only this time rigid miniatures on a tray, like the pieces from a game of Coppit, placed on top of each other to form a kind of Russian doll or “find the lady” trick.

Anderson and her team have concocted their own physical theatre of the absurd in a form that celebrates both the wonder of human existence and the great tradition of British eccentricity.   We welcome this extraordinary choreographer back and look forward to much, much more. 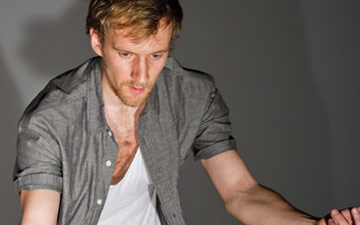 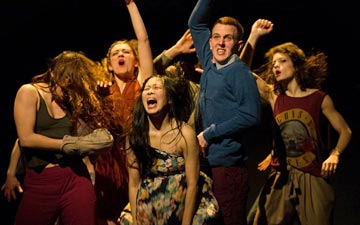