Leading British fashion designer Hussein Chalayan has spent his career staging and presenting bodies. To date, of course, they’ve been catwalk or photoshoot vehicles for his latest couture creations. Gravity Fatigue, though, is his first attempt at making a dance show.

Calling it a dance performance might be pushing it, to be honest, as there’s little actual dance required from the 13-strong cast. Instead, it’s more of a slick live art installation, with the performers exploring the constrictions and possibilities of each new set of extraordinary outfits and set interventions.

Eighteen “tableaux”, with names such as Intermission On Alterity, pass before us; a conveyor belt of coolly detached, sometimes gently amusing ideas, which channel Cyprus-born Chalayan’s stated preoccupations with subjects such as disembodiment, migration, technology, selfhood and perception.

We’re not really invited to explore these themes very deeply, though, as we skip from, for instance, women in niqab and abaya delightedly bodysurfing across a sea of rubber balls, to a catwalk show in which all the women are obscured by white sheets draped over their heads, to a riotous pool party which turns into a huge entanglement of odd beachwear and limbs.

The most eye-catching moments are when Chalayan’s costumes take on a central role. For Elastic Bodies, the lights rise and fall on pairs of dancers locked into twisting poses inside shared rubber outfits that extend across the stage, like things that have escaped from a Francis Bacon painting. Arrival Of Departure features boxy jackets and heavy overcoats that are transformed with a shrug into glittering sequinned dresses, which the dancers spin in like whirling dervishes. And in Word Dictators and Rise Disembodiment, beautiful dresses take on lives of their own to the vague alarm of their wearers, in elegantly constructed coups de theatre.

Choreographer Damien Jalet has been the man tasked with transforming Chalayan’s diverse inspirations into a coherently choreographed show. He makes a virtue of the stop-start nature of these pieces, assembling a vibrant collage of ideas teamed with a sometimes rather overpowering soundscape.  But he can’t disguise the fact some of these vignettes are pretty under-developed. And you can’t help feeling disappointed that, whereas art/dance should really invite you into somewhere emotionally profound, Chalayan, for all his interests and influences, seems content to stay skittering across surfaces. 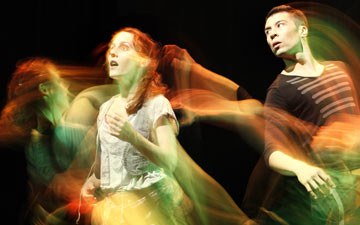 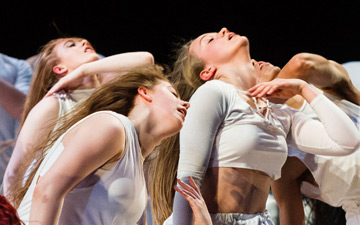 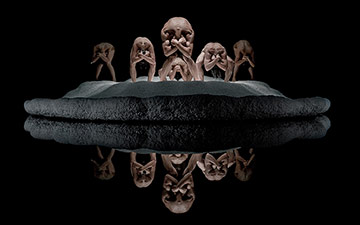