Like the novelist who writes a best-seller first time out, whatever Kate Prince goes on to create in the future, she’ll always struggle to match the brilliance of her first full-length show. Into the Hoods already holds a clutch of “firsts”: not least for pioneering hip-hop in the West End with a five-month run at the Novello Theatre (was it really seven years’ ago, gulp!); and garnering award nominations by the fistful. And, now it’s had a refit to come back “Remixed” and refreshed to win over a new generation of young audiences to ZooNation’s flagship for their very special brand of dance entertainment.

The company has come a long way in a dozen years; a journey to maturity that is reflected in this remixed show’s production values. There are new costumes and new graphic illustrations for the “Hoods” – aka the Ruff Endz Estate – which replaces the “Woods” of the original fairy tale mash-up in Sondheim’s musical (made once again prominent in Rob Marshall‘s recent film, starring Meryl Streep as the Witch).

There’s also a radically revised soundtrack that must break all records by mixing snatches of around 100 songs with original music by DJ Walde; some old favourites have gone (the Mission Impossible theme, Barry White) to be replaced by snips from the likes of Kanye West, Pharrell Williams and The Black Eyed Peas. The continual stop-start changing of the music can be irritating to those of us of a certain age and I begin to find the “Ruff Idol” reference to “Pop Idol” a bit dating. But, the lyrics were always relevant to the action onstage and, if anything, Prince and Walde have tightened up these quasi-operatic associations, even more slickly.

The company may have gained gravitas but not at the expense of losing the raw edge that always made this show so special; and the overwhelming reason for that lies in the new generation of performers that Prince has brought to the show. Who can forget the stand-out performances by the guys who first impressed in these roles – Teneisha Bonner’s Spinderella and Rowen Hawkins as (Basement) Jaxx, for example – but now we can be wowed all over again by a new crew who look likely to become every bit the equals of that record-breaking Novello cast.

Especially notable were the pairing of 19 year-old Corey Culverwell as the new Jaxx in the basement of Beanstalk Towers and Natasha Gooden (26, but probably still has to produce ID in a pub) as Lil Red. They were super-cute together, which helps the storyline’s romance, but, boy, can they dance! Culverwell – a recent finalist in not one, but two TV talent shows (Britain’s Got Talent and Got to Dance) – is the Ivan Vasiliev of hip-hop, by which I mean he can jump and spin like a diver without the springboard and a skater without the ice. I look forward to seeing more of this young man’s career.

Lucinda Wessels, a 24 year-old dancer and DJ from Amsterdam, is a stunning new Spinderella; her transformation from the hoodied girl spinning discs, from her makeshift street platform of a yellow wheelie bin, to the “princess” in a sparkling mini-dress emphasised her passing resemblance to Sandra Bullock by reprising the latter’s similar “grunge-to-beauty” journey as Miss Congeniality’s Gracie Hart. ZooNation’s resident king of krump, Duwane Taylor, brought a shedload of attitude to the (big, bad) Wolf; and Daryl Baker rocked the role of Prince, the Ruff Endz “Player”, caught up somewhere between the Rap-on-Zel and Spinderella storylines. In the former of these roles, Jade Hackett was making her ZooNation debut as the girl locked up in Beanstalk Towers by her wicked father, the landlord (great comic mime timing by Andry Oporia).

For all the excellence of these new cast members, it was the return of Annie Edwards (unbelievably, still only 18) that was the icing on the cake. I must have seen her as Fairy Gee while not yet a teenager, but if ever a role was nailed onto a performer, this must be it! But, now, as an adult, she gets to be a major part of the overall ensemble and kicks ass in every scene.

This company inspires young people largely because of its familial ethos. Its notable how many of the original cast members are still involved behind the scenes. The new costumes for this “Remix” were co-designed by Russell Royer who played the Lost Boy when the show first opened at the Peacock Theatre, a decade ago. Several other former performers are still engaged on Prince’s creative team. And, as if to emphasise ZooNation’s family orientation, the company’s founder is photographed for the programme, holding her baby, Ella; who must have a fair chance of being a hip hop dancer by the time that this show is remixed again!

This version of the hoods is not destined for several months in the west end but it is going on tour and the Ruff Endz Estate will be temporarily resident all over England – from Blackpool to Brighton, and many stops in-between – from February to May, next year. 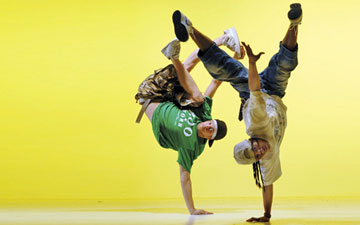 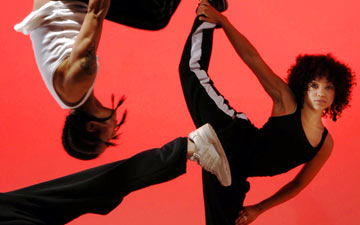